This article describes how I managed to create a setup with my Macbook Pro to mix and preview 5.1 surround sound in Soundtrack and Final Cut Pro.

Gear
Your mac is able to output an encoded Dolby AC3 stream to a surround amplifier through the audio jack. This works only with DVD-movies and QuickTime movies which already have the 5+1 channels encoded in AC3. When you mix surround sound the 5+1 channels are not encoded (and probably can't be encoded on-the-fly). So you need an external surround sound card.

There seems to be such cards for stationary Macs (PCI cards). For a notebook I have found Griffin FireWave to do the trick: 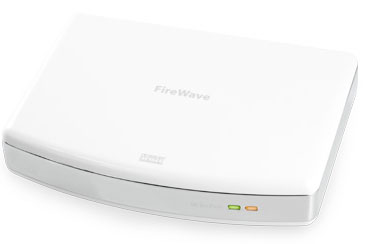 I bought my first FireWave for 100$. In October 2008 it was on sale for 20$. Unfortunately, a search for the product at www.griffintechnology.com reveals it is being discontinued! Hopefully another similar product will take its place for laptop users. Generally, any 6-channel sound card for mac (internal/external) should do the same.

This device plugs into your FireWire 400 port (or 800 if you have a 400-800 cable). It has 3 3.5mm stereo-mini-jacks which outputs 3*2 = 6 channels line level. So effectively, you have 6 line level signals (similar to the output from a CD player or your Macs audio-jack) which you need to amplify into 6 speakers. I have fed this directly into a real cinemas surround system with no problem, but for mixing at home I found Logitech X-540 surround speakers to be fine. X-540 has 3 minijacks which are even colored like the outputs of FireWare. Very easy to setup.

Set up your Mac
When the FireWave sound card is connected to your Mac you should perform the following two steps to make the system use it correctly: 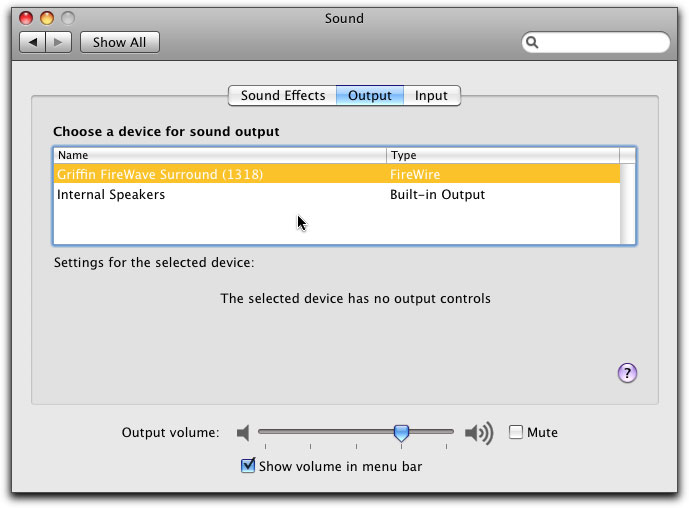 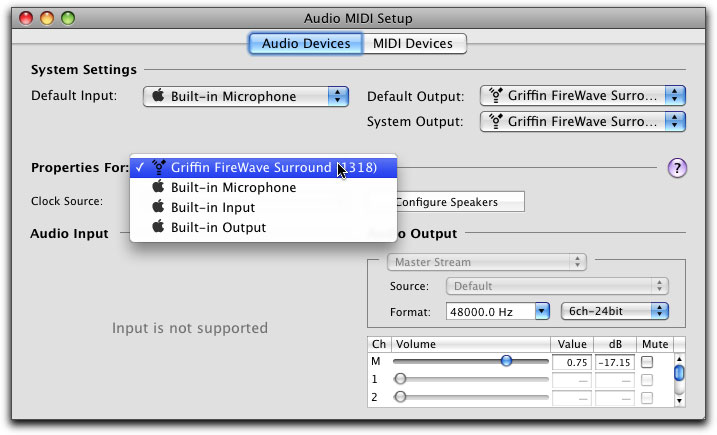 Set properties for FireWave. I guess your settings should match those you see in this screenshot above. Click the button "Configure Speakers" in this screen. This will turn up: 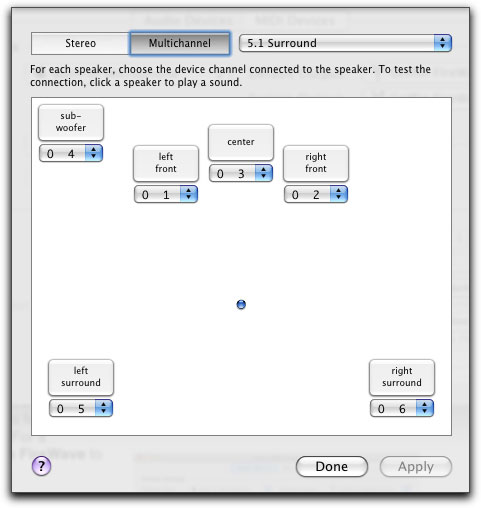 Make sure all channels are set like above. Then click each of the 6 buttons. You will hear noise in the corresponding channel. If each discrete channel plays correctly, click "Apply" to exit: you are now ready to mix surround sound! 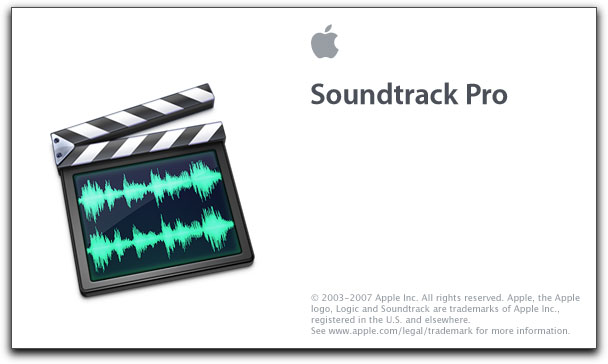 Make sure the FireWave sound card is selected in the Sound Preferences before you launch Soundtrack Pro (you should have done this in previous steps): 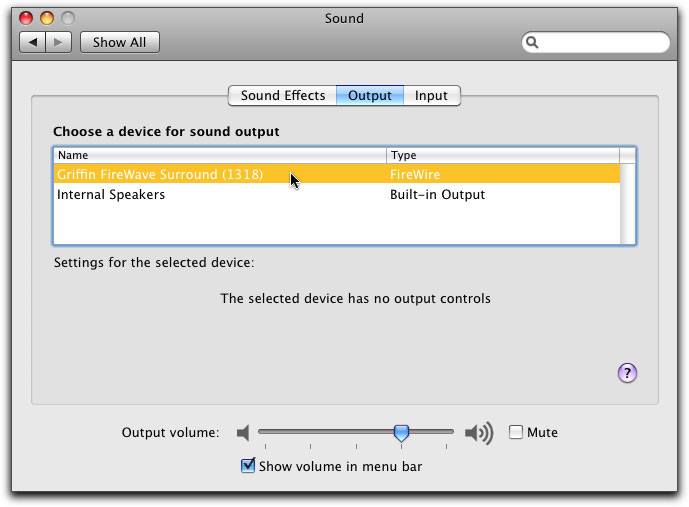 When Soundtrack Pro is started you should see 6 channels in the Meter vs. only 2 under stereo conditions:

To learn the basics in Soundtrack Pro, drag a loop onto the timeline of a channel: 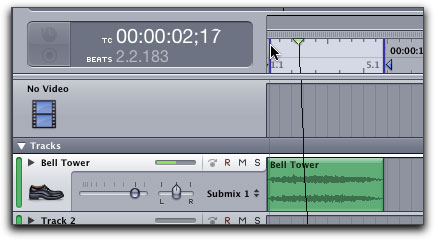 By default this plays in stereo which is verified by the Meters of Soundtrack pro: 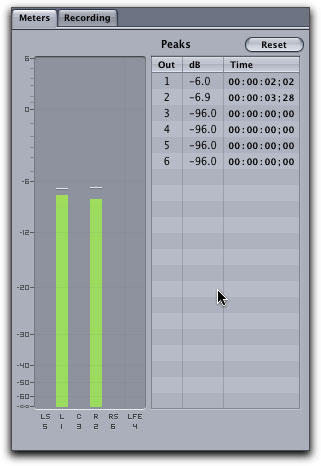 Now, right-click the stereo-panner of the track:

You will now see the surround panner:

The track still plays in stereo - unless you begin to drag the little white point around - then it should start to play in different speakers: 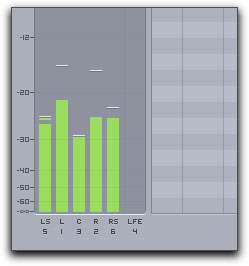 Now, double click the surround panner - the HUD will appear: 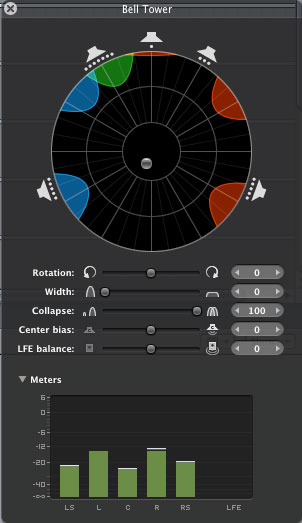 This gives you the same control and much more. You can experiment with the settings to figure them out.

One notice about the LFE channel: It seems that the FireWave sound card creates output to the LFE channel (subwoofer) from the 5 other channels regardless of what you do. So don't bother about the LFE. I don't know if this is FireWaves fault or ... One could check by making an AC3 export of a test-track, burn a DVD and play it on a DVD surround system.

In reality it's convenient that the subwoofer is used "automatically" for you. It's unlikely you want to control it separately.

Mixing "live" surround sound
You can record the settings you impose on the clip while dragging the white knob during playback. This is done by selecting "Touch" in the menu:

While you play back the timeline and drag the white knob the settings are recorded and can be seen as keypoints in the envelope of the clip: 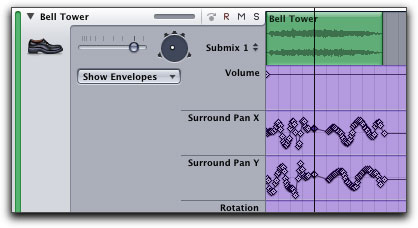 This is quite cool if you wish to animate the surround sound to a video clip.

Notice that "Touch" also affects other settings for volume, effects etc. so turn it off againt when you don't need it. 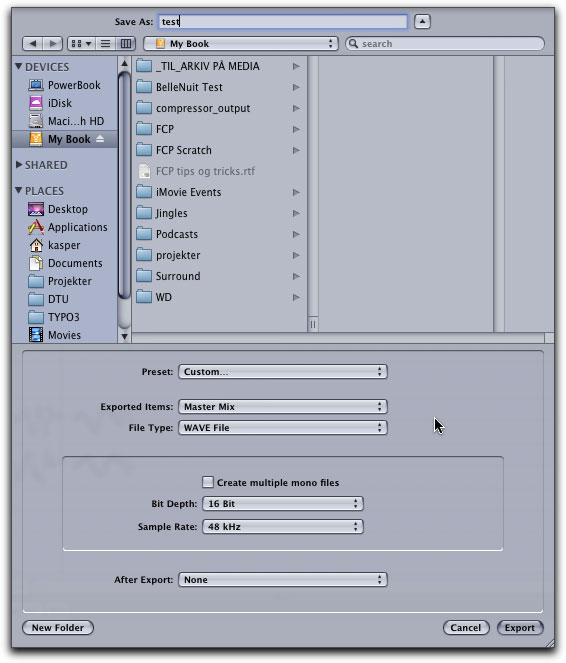 (This gets properly imported in Final Cut Pro).

Hint: Spend a few minutes to make a testsurround clip which plays a distinct sound in each channel in turn, later you can use this to verify your surround setup. I call that clip "Channel ID". 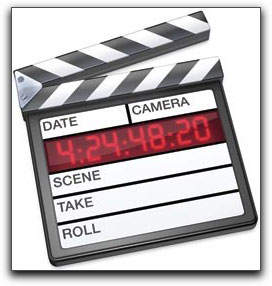 In Final Cut Pro you need to set up your Timeline to support surround sound.

First, import your Wave file with surround track. Then drag it to the time line. You should see that it takes up 6 channels:

By default it does not play back in surround!

When working with surround sound in Final Cut Pro it is useful to switch to the Audio mixing layout: Window > Arrange > Audio mixing. Then you see a mixer in the top-right corner: 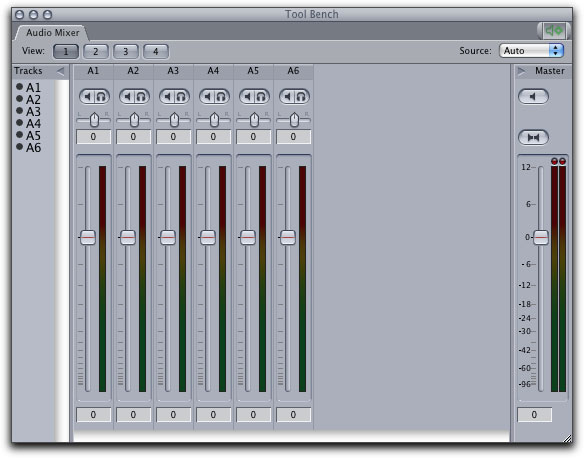 As you see: 6 tracks but only a stereo output! 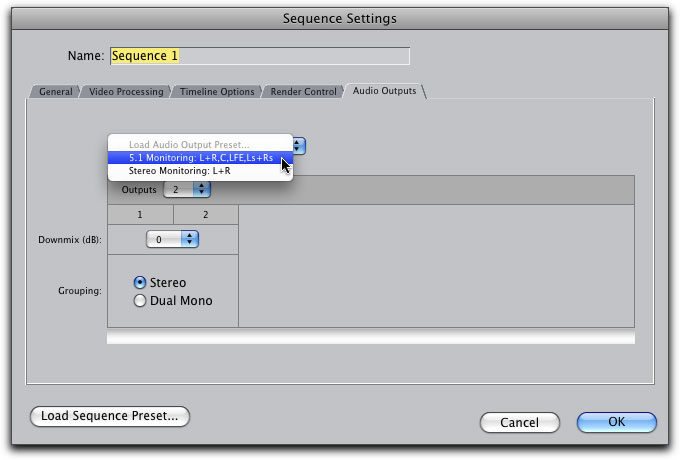 Select "5.1 monitoring" and you should see this:

When this warning appears...: 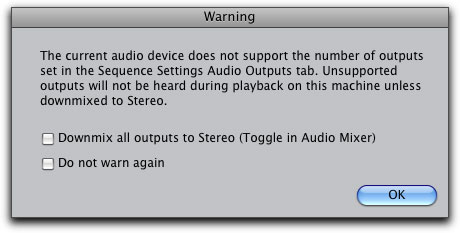 Now the mixer should have all 6 channels in the output to the right: 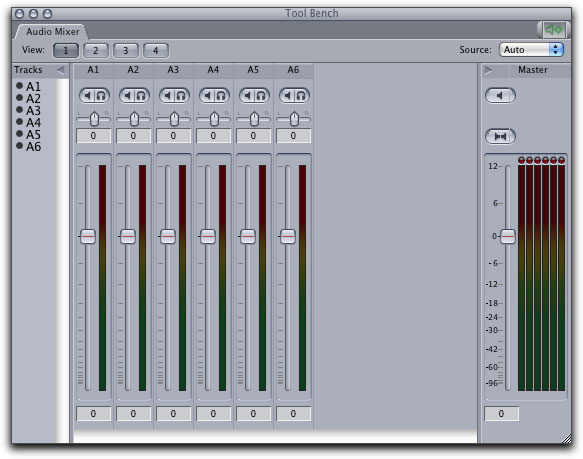 However, it still plays back in stereo; you need to configure where the sound from track A1-A6 goes. So rightclick the tracks one by one and select:


The final step you must go through is to create "Stereo Pairs" out of the tracks in A1/A2 and A5/A6:

You will see indications that the tracks are paired:

Finally it should look like this for all 6 tracks: 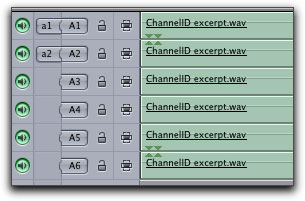 And now it plays back correctly!

Alternative setup: 6 Dual mono tracks
To avoid creating stereo-pairs of your tracks you can also set the 5.1 monitoring up differently in sequence settings:

Select "Dual Mono" to all of them! 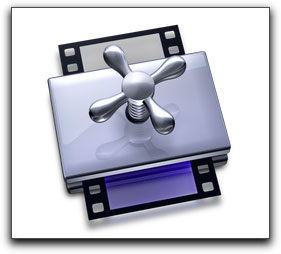 Saving a sequence in Final Cut Pro with "

Exporting with File > Export > Compressor will work though.

In Compressor, I have made custom presets with surround:

This one is based on one of the HD export formats, but modified to export the surround sound: 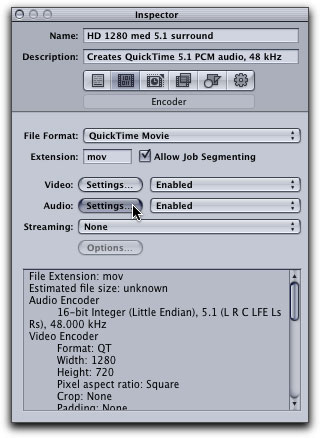 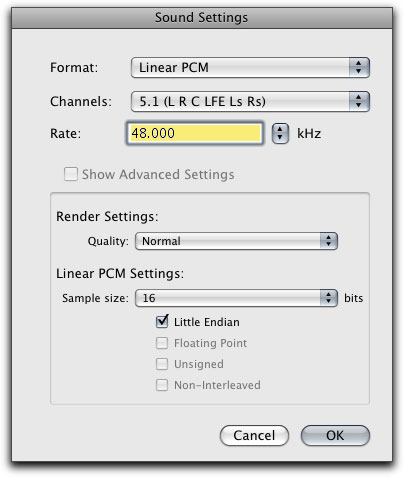 Under Compressor settings, you will find this in Apple > Formats > Audio:

The resulting AC3 file will be in surround sound. You encode the video as usual. Before you burn it to DVD, it can be tested with a mediaplayer such as VLC (but not QuickTime since it will not read AC3). 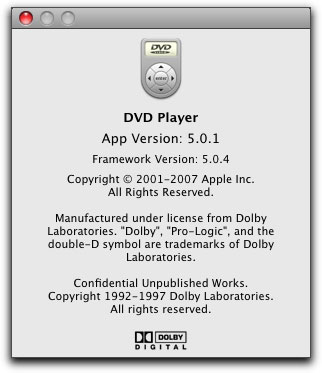 If you didn't know: The way to play back surround sound from DVDs on your mac: In DVD Player's Preferences: 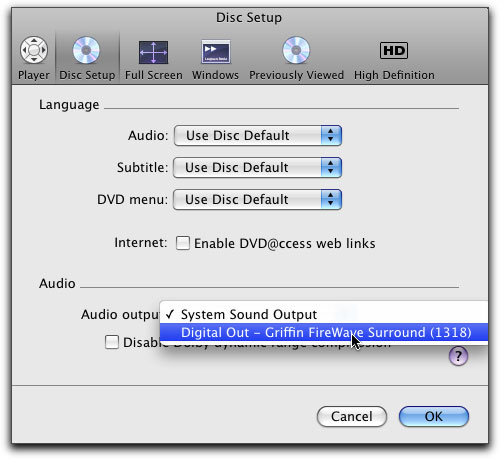 (Here you will have the option of choosing the "Digital Output" of your mac if it is connected to a surround amplifier - but as you can see, also FireWave can act as an AC3 decoder!!) 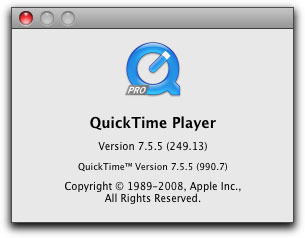 In QuickTime you can playback your surround sound files and movies. To check it works:

For Wave files exported from Soundtrack Pro: Open the Inspector and see that the sound format is 16-bit Integer 5.1: 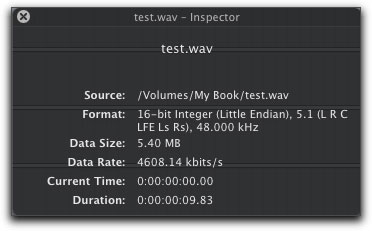 It should play back in surround.

Another example of a HD export with surround:

Troubleshooting
I have experienced that when the signal becomes too high in all channels at the same time - even if not superceeding the 0db - FireWave (or whatever, but not the speakers!) will make ugly noises in the Center speaker. I have solved this by turning the volume down in some of the tracks or applying a Limiter filter. The problem has been found in both Final Cut Pro and Soundtrack Pro.


Kasper Skårhøj is a freelance IT and multimedia consultant working out of Copenhagen, Denmark. He is mainly know for his role as an Open Source computer guru, founding the web content management system, TYPO3 during the first decade of the millennium www.typo3.org. Currently he is passionately involved in various multimedia production activities mainly for non-profits and other contexts with a high degree of altruistic essence. His favorite vision of the future is making the world a better place while having fun and feeding his family. As if the creative endeavors in his multimedia business was not enough, he is additionally juggling math, physics and other properties of the material world studying for a masters degree in civil engineering - also for the fun of it.