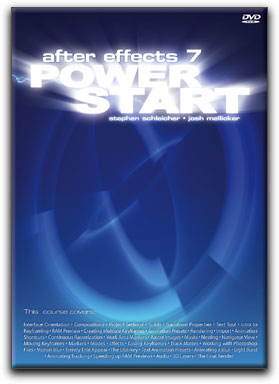 
With each new version of almost any important application comes numerous books and tutorial discs designed to clear away the cobweb of confusion for the new user as well as to explore any new innovations to be found. Adobe After Effects 7 has certainly made some changes since their last inception and the folks over at DV Creators has jumped in, gotten their feet wet and released a beautifully produced Power Start disc. 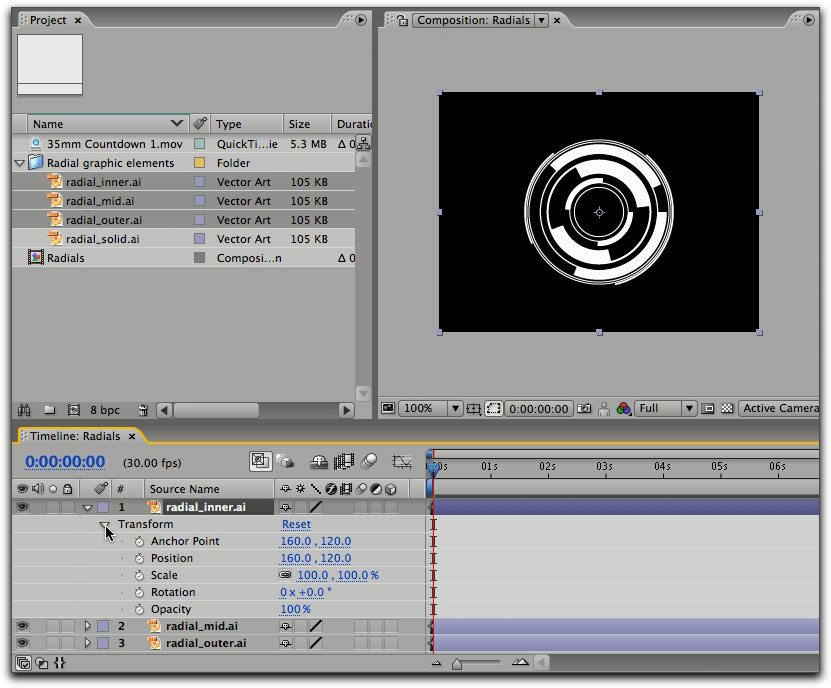 Working with Radials is just the start of this extensive logo creation project.

In order to get to the end project Steve Schleicher leads the user by the hand, first introducing and reviewing the After Effects 7 interface and various important pop up menus. This is followed by a fairly thorough exploration of the project settings, an introduction to key framing, various animation presets and rendering. That's just lesson one and it readies you for the real meat of the Power Start disc. It's on to the Advanced Section and its thirty three individual lessons, all geared to completing the project but making sure you have a solid handle on almost all the features and tasks capable in After Effects 7. Much of the project utilizes Photoshop layers and, thus, DV Creators assume that the AE user will have a general working knowledge of Photoshop. However, AE 7 Power Start goes much, much further helping you learn the many shortcuts to multiple parameters, moving around your key frames as you adjust your project, applying and manipulating motion blur, nesting, text, ram previews, audio tracks and even throwing in a lesson on creating 3D layers before the final render. 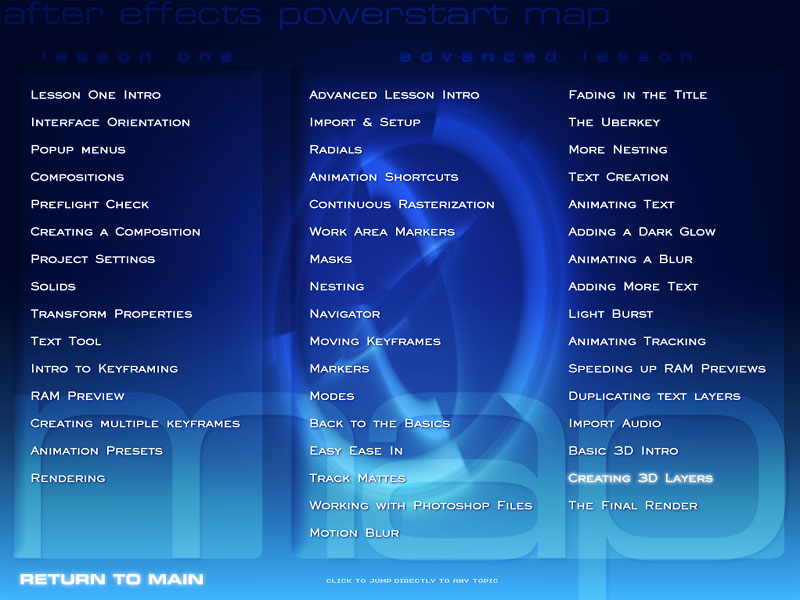 It's easy to skip to any of the menu items for repeat or review.

Characteristic of all DV Creators' Power Start tutorials is their own chunkalized sections for the three major lessons the disc incorporates in the learning of After Effects 7. Based upon specific projects, the lessons proceed in these 'chunks' of varying length. As each step is dictated the user may then switch over to AE 7, complete the task as instructed, and then switch back to the Power Start disc. The keyboard shortcut of command/tab is all you need to switch back and forth. If you need to hear any particular section again, it is a simple matter of clicking upon the 'Repeat Chunk' button, or use the left and right arrow keys, and that part of the lesson is repeated.

The key here is flexibility, no matter which key you hit.

This disc certainly makes good use of the chunks as each one is begun or stopped literally with each step of the project. The more experienced user of AE 7 may click on the chunks on/off button that allows the entire lesson to continue sans these chunks or simply hit the 'next chunk' button to skip ahead in the lesson. To do so will certainly speed up the time you will need to invest in going through the disc but, for the new user, it is probably best to follow the steps chunk by chunk.

With Stephen Schleicher as the amiable and often humorous host and guide to After Effects Power Start 7, the production quality is excellent. 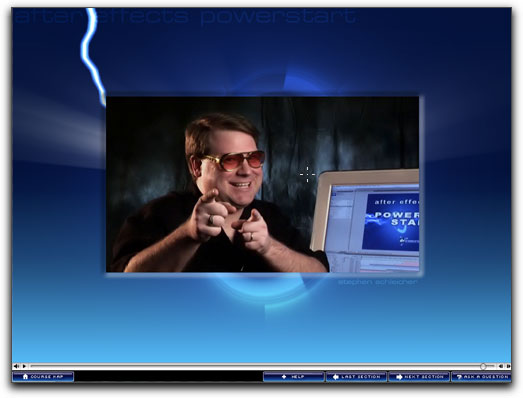 Both audio and video is top notch and I found no glitches anywhere. Stephen is easy to understand and does a great job explaining things clearly.

As I inferred earlier, in order to complete the disc's final project you are exposed to a great many of the features found in Adobe After Effects 7. 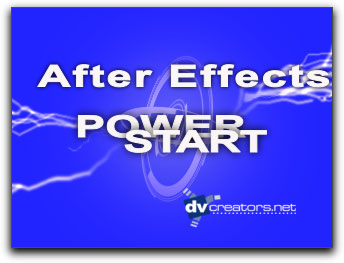 After spending four or five hours, depending upon how experienced you in After Effects 7, and inclusive of breaks in the kitchen, T.V. and loo, you will find yourself becoming much more comfortable jumping around the interface.

Bottom Line Time. There is no tutorial anywhere that will make someone a master in any editing application, inclusive of After Effects 7. I don't believe that is their purpose. However, a good tutorial disc (and there are some funky ones out there) will go a long way towards helping you achieve mastery. A good one will provide enough information and tasks to accomplish to get you to feeling comfortable and, at least somewhat, knowledgeable. Then it is up to you, the user to practice, practice, and practice. The more you use the application's many modes the more expert you will become. Fail to use it, and you just may lose it. DV Creator's After Effects 7 Power Start is a great disc to get started with. It truly provides you with the opportunity to use and apply most of the important features in After Effects, its easy to use and clearly understandable. I remember a time when I would have killed to have an After Effects DVD this good. For me, it was a great review of AE 7, for the beginner After Effects 7 Power Start could be indispensable.