A DROPLET is a small, single-purpose application that you can create in Compressor.
Each Droplet you create will do one thing, and one thing only:
convert files into a specified format, and place the conversions in a pre-defined location.

One type of conversion that gets talked about a lot around here is converting MP3 files, or other non-FCP friendly audio files into AIFFs.
So this article will focus on creating a droplet that converts audio files into 16 bit, 48k AIFFs

Making the Droplet involves creating a preset within Compressor, and possibly establishing a destination for the new files.
It can reside anywhere, but the desktop is a pretty good place.

Make sure the PRESET window is open, and you are in the SETTINGS tab.
Click on the + symbol at the top right of the list of presets
Choose AIFF from the drop-down menu,

A new Untitled preset will appear.
Double click on it to open it in the INSPECTOR

Here, you can Name your preset, and give it a description.
If it hasn't already opened in the ENCODER section, click on the ENCODER button second from the left in the button window. 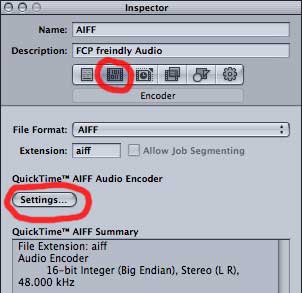 In the Encoder section, click on the SETTINGS button

When i opened this window, it already had most of the settings i wanted.
if you need to change them, set them to: 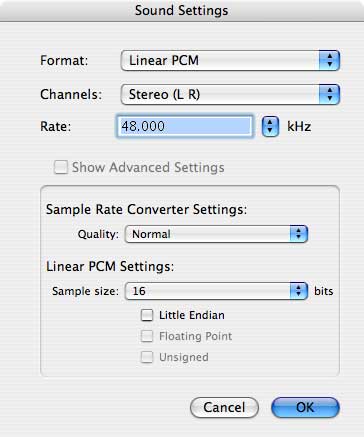 A note on the Quality Setting

The default here is "Normal", and this is the only setting i needed to change.
Whether i really needed to change it or not was something i wanted to find out, so I tested a 3 minute 30 second AAC music file.
the "Normal" conversion took 5 seconds, and the "Best" took 8 seconds
Doing an A/B test on the two files in FCP, i could hear a difference.
It was subtle, but the "Best" file did sound better, with a fuller sound. The "Normal" file sounded a bit flat.

Click on OK to confirm the new settings,
then close the INSPECTOR window.
When you do, you'll get a box asking you if you want to save the changes to your AIFF preset,
which you do,
so click on OK, here, too

Your conversions need to go somewhere, and this destination needs to be included in the droplet when it is made.

In the settings window, go to the DESTINATIONS tab

Some destinations are already established in Compressor, and will be available to you in the Apple folder
They are:
Source
Desktop
User's Movies Folder
and Cluster Storage

(While "Source" can be a useful destination in some situations, it might not be too good for audio.
If the original audio is on a CD, then that couldn't be written back to.)

To create a Custom Destination, Click on the + button at the top right of the destinations window, and choose LOCAL 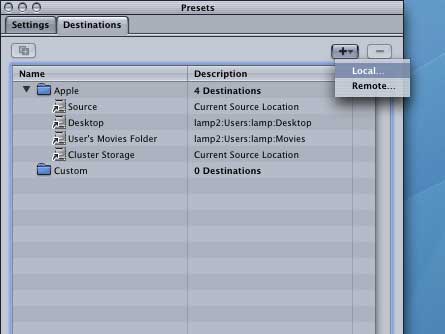 Navigate to your chosen Destination, which could be an existing location, or if needed, a new one you create.
In this case, go to your Movies Folder, which is easily accessible in the list of locations at the left of the navigation window.
Make a new folder, using the button at the bottom left of the window, (or Apple N) and Call it AIFFs for FCP. 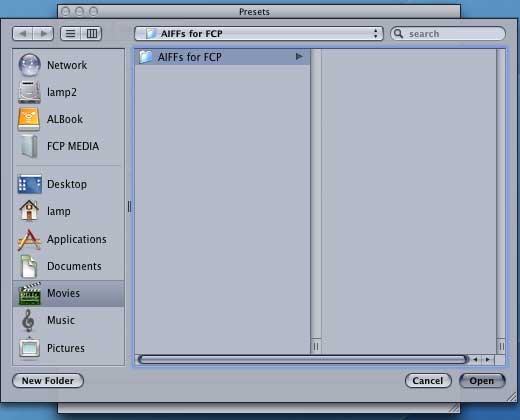 You'll now have a new, "Untitled" destination.
Double click on the new destination's name to open it in the Inspector and re-name it. 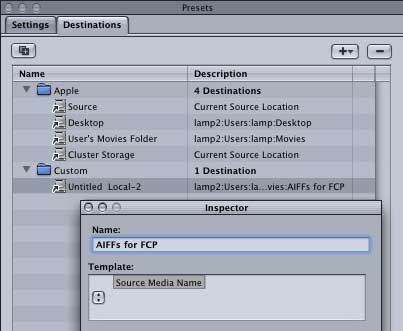 Also in the Destinations Inspector window is the TEMPLATE section. 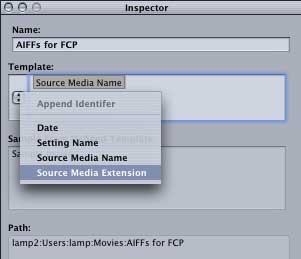 This controls how the converted file is labeled.
If you wanted to, you can have appended to the original file name the date of creation,
the Settings Name, or the Source Media Extension.
Adding the Source Extension seems like a good idea to me.
This way, i'll always know that the file was made from an MP3, say, and may not be the best possible version.

Go back to the Settings tab of the Presets window, and select the AIFF for FCP preset.
now click on the DROPLET button, the middle of the three buttons at the top left of the window

You'll get a typical save dialogue, with one extra thing:
Along with asking you to what you want to name it as and where you want to save it. (I'm saving to the desktop)
You ALSO get a Destination pulldown menu at the bottom of the save window,
where you Select from the list of available Compressor Destinations.
The Destination you've just created will be in there, too. 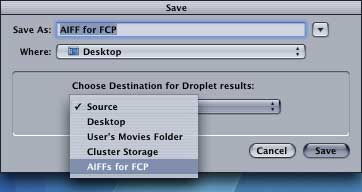 Hit SAVE, and the new droplet will be created on your desktop

Now it's easy to convert any audio to AIFFS compatible with FCP.
Open this Droplet and drag any number of files into the SOURCE FILE area.
Or more simply, now with Droplets made in Compressor v2 you can just drag the files directly onto the Droplet itself. 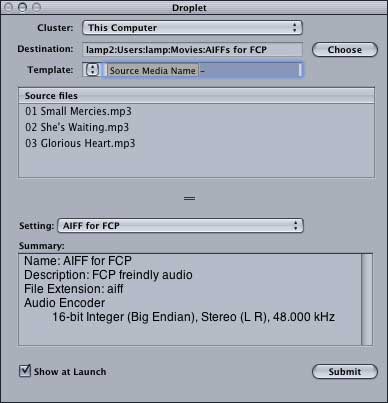 While you CAN drag files directly of CDs into your Droplet,
you don't have the advantage of getting the tracks automatically named, as you would in iTunes

If this is the case, you wouldn't want all those droplets cluttering up your desktop, and you would be best to create a folder somewhere in your system for keeping your Compressor Droplets.
the Droplets could then be added to your dock.

NICK MEYERS is a Freelance Film Editor working in Sydney, Australia. He won an Australian Film Critics Award and IF Award for editing THE BANK, and gained an AFI nomination for editing his first feature THE BOYS in 1998. In 2004 he edited the film THREE DOLLARS, staring David Wenham, Frances O'Conner, and Sarah Wynter, which at the time was the biggest budgeted feature film cut on Final Cut Pro in Australia.