As most videographers learn quickly enough, on board camcorder microphones are very limited in terms of their audio quality and capabilities. There is no single microphone that is perfect for all occasions, yet getting good audio is crucial to any video production. Most viewers can tolerate less than stellar visuals, however tolerance for poor audio is slight.

The best way to get good sound is to get the microphone as close to the talent as possible. I recall many times watching old movies and seeing the boom microphone drop momentarily into the frame or see the shadow on the opposite wall. Guess the editors didn't catch quite all the gaffs or hoped no one would notice. Actually, this doesn't happen all that often on shoots and if it does, 'take 32'. The use of boom mics is very common on sets and is one great way to achieve the goal of audio closeness and directionality. However, not everyone can be sure of having someone who knows how to hold and position his or her boom microphones and its use is not always feasible or appropriate. This is where the use of a good lavaliere microphone enters the picture.

We've all watched newscasters on television, viewed various stars being interviewed for their thoughts and opinions and have seen numerous reality shows. We've also all noticed the little lavaliere microphone pinned to their collars, blouses and wherever is most convenient and inconspicuous. Wireless microphones have been around for a very long time, however, what used to look like Castro's Cuban cigars have, today, been so greatly reduced in size that they have become relatively easy to hide on your talent.

A lavaliere or really any wireless microphone is essentially a tiny radio station. The microphone is attached to a transmitter, which converts the audio signal into radio waves. These waves are then broadcast for a few hundred feet, depending upon the strength and quality of the wireless, and then is grabbed from the air at the other end by the receiver and converted back into audio for your camcorder or sound system. Wireless microphones work on specific bands of radio frequency as determined by the FCC. At the low end of the scale is VHF or Very High Frequency. This is ironic as it is the lowest band of frequencies assigned to wireless microphones. While there are some good systems in this range, most modern systems have moved to the UHF or Ultra High Frequency band, which is less crowded and provides for better signal penetration through and around obstacles.

Some of these wireless microphone systems can cost a pretty penny to the individual who does not have the deep pockets of a television station or successful production company. However, Azden's latest release comes in at a reasonable price for a high quality and well-made lavaliere system. Long known in the audio field as producers of pro microphone systems, the 105 Series Wireless is not the very top of their line, but for most shooters the Azden will provide a huge jump in audio quality over the onboard microphones that come supplied with their camcorders, as well as providing a major improvement from the wireless microphone they picked up at Radio Shack for $50.00. 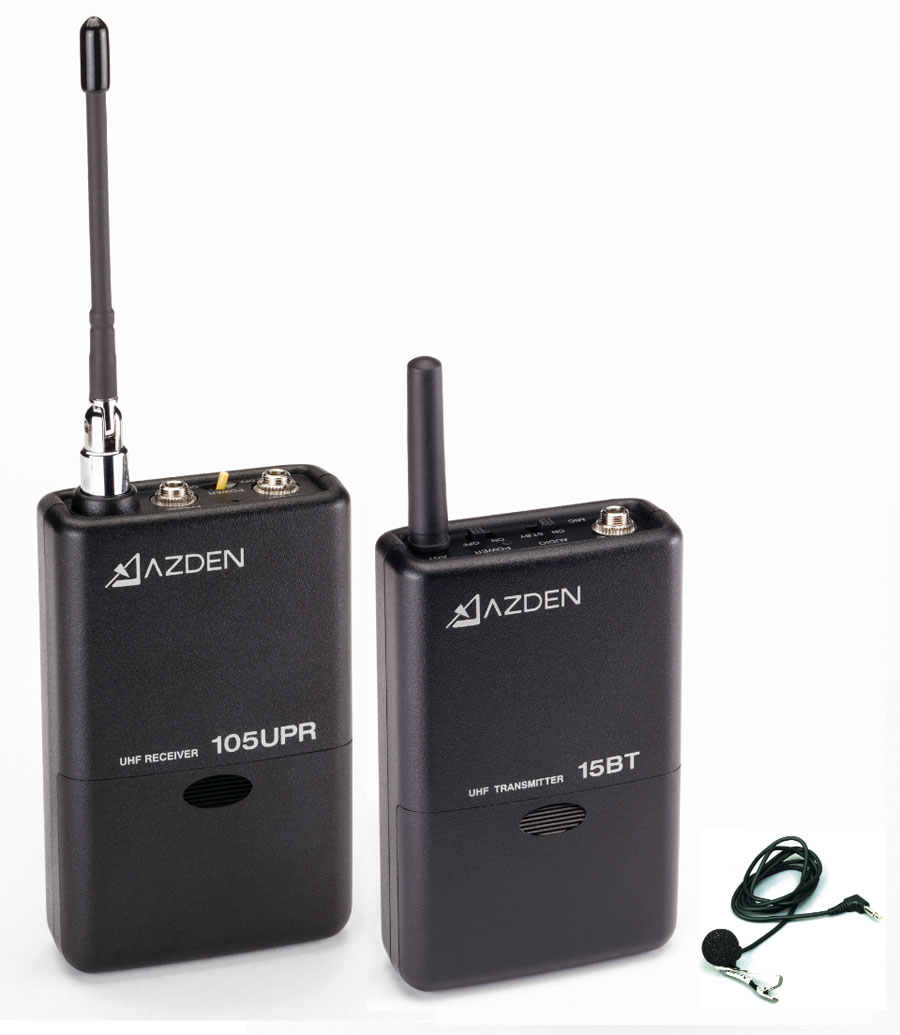 Both the receiver and transmitter for the lavaliere UHF microphone have 92 channels to choose from with an operating frequency range of 566.250MHz to 589.750 MHz and each are powered by 2 'AA' alkaline batteries. While the specs say that the battery life is 6-8 hours, I did not test just how long they lasted for me. The receiver falls in the 50Hz-12 KHz frequency range, which accommodates almost all voice frequency levels.

The omni directional lavaliere microphone's output is -58Bm (load balanced 600ohm) and arrives with a small foam protector to help prevent extraneous noise. This foam windscreen is glued on so you do not need to worry about it falling off and being lost unknown to you.

There are a number of features that come with Azden wireless mic system that will quickly become appreciated by the user. The receiver has a single pivoting high gain antenna providing greater adjustment possibilities for bringing in the clearest audio. It also has its' own hot shoe mount keeping it out of the way so that it doesn't get knocked off your belt loop or pulled out of your pocket. In certain future situations this might be a problem for me as I frequently use mini light panels on my cam and therefore, would have to choose to use the cams' hot shoe for either the lights or the microphone. A work around would be to place the receiver on my belt or in my pocket and use the cam's hot shoe for the mini light panels. The transmitter has a strong clip to attach to the talent's back pocket or belt loop, and the microphone's alligator tie-clip attaches solidly onto your talent's shirt collar, bra, hatband, or wherever you attempt to hide it.

In addition to its small size the Azden 105 is lightweight even with the batteries installed. The casings of both the receiver and transmitter feel solid providing confidence that things won't fall or pull apart after heavy and repeated usage. The receiver has two ports, one phone input for the use of headphones, which one should always have to monitor the audio signal, as well as a small 1/8" mini cable which connects from the receiver's mic out and inserts into your camcorders microphone input. The cable is certainly long enough for use with most any camcorder. I coiled mine up and used a piece of tape to be sure it would not hang down and get in the way. The yellow power switch has a solid feel to it turning the receiver's LED light to Red, showing power on, and to Green when receiving an audio signal. The transmitter has a similar single 1/8" input for the lavaliere microphone. Only one microphone can be used at a time off this transmitter. In addition to the sliding on/off switch, there is a on/stby switch which serves as a mute function.

I took the Azden 105LT system on location to a sidewalk overlooking the beach. There I solicited various people to provide their opinions regarding the huge seal controversy that San Diego is currently experiencing. I had to adjust the camcorders audio level within its menu and then I was good to go. The resulting audio was excellent with good range between highs and lows. I did apply a piece of moleskin to the microphone itself to help reduce noise caused by the rubbing of clothing and body movement and that certainly helps when using any lavaliere microphone. While I had no problems with any electrical interference, that I had 92 channels to choose from would have quickly enabled me to sidestep that issue. There are some lavaliere systems with more than the 92 channels this one supplied, but just how many channels does one need in the first place? One switches between channels by opening up the battery compartment and using the very tiny screwdriver nestled within the compartment. There are two tiny channel wheels that you then fit the screwdriver into in order to change channels. The channels set within the receiver must be the same for the transmitter so if you change channels in one you will need to change the channels in the other as well. I found the markings on the wheels to be very small and difficult to read and fitting the screwdriver into the slot was equally clumsy. The recessed hole housing the channel selector is fairly small so holding the screwdriver and changing channels is done blindly as between the screwdriver and your fingers holding it, you really can't see what you're doing very well. Never the less, the channels change with a tactile click so, with a little effort, this was not too hard to accomplish.

Yes, there are higher end lavaliere microphone systems with more channels to choose from, extra inputs for additional microphones and digital readouts for channel selection, but then you are paying many, many more dollars for these conveniences, and not necessarily getting a significant improvement in the actual audio. This is why the Azden 105LT system sells itself. It enables you to produce a much higher quality audio than any onboard camcorder microphone will give you and won't cost you next months' mortgage at the same time. I have found that so many editors spend all their time improving their visuals in post and barely are cognizant of the importance of audio quality.

For those who have finally awakened to the importance of audio quality in their projects and productions, and for those who simply cannot afford to sell their first born to purchase a truly high end wireless system, I truly do not feel that anyone would be disappointed with the Azden 105LT lavaliere set. You can now finally get high quality audio at a more than reasonable price. And that's my bottom line. 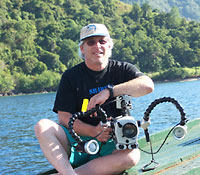