[This article was first published in the August, 2004
issue of Larry's Final Cut Pro HD Newsletter]
Click HERE to Subscribe

Some people are fans of sports teams. Me? I'm a fan of software. (Well, OK, software and the Green Bay Packers, but that's more a religion than a sports franchise... Still, I digress.)

One of the applications I'm a huge fan of is ProTools LE. It's just the best for mixing video soundtracks and I've been using it for years.

Now, Final Cut made great strides in improving its audio mixing capability in version 4, however, that was because it had such a long way to go.

I will happily produce a six track mix in Final Cut, because the audio mixer makes that easily doable. However, if I have more than six tracks, or I need serious compression/limiting or noise reduction or smoother EQ or, well, golly, just about any professional audio tool, I'll move the audio out of FCP into ProTools.

The great part is that Final Cut and ProTools (and, for that matter, Bias Inc.'s Deck) all work together to make swapping audio files painless. And its done using an interchange format called, "OMF," to get it out of Final Cut, then exporting a stereo AIFF out of ProTools to get it back into FCP.

Here's how this works:

1. Create your sequence. Spot all your audio and effects and make sure everything is in the right position and sync. In other words, use Final Cut to accurately locate all your audio clips, but don't worry about levels or transitions. 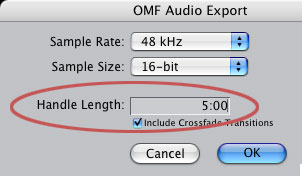 3. In general, the default settings of 48k, 16-bit are acceptable for all DV and Betacam audio. (By the way, for you audiophiles, Final Cut can handle 8-bit to 24-bit audio in a sequence.)
4. Audio engineers like handles the way video editors like handles. So, give them some, in this case, 5 seconds.
5. Save the file.

OMF has an internal limit of 2 GB. This translates into ROUGHLY 6 tracks of mono, 16-bit audio, each one-hour long. (A 16-bit mono audio clip is roughly 5 MB per minute.)

Update: Ken Stone brought this next point to my attention recently. If you try to export only part of a sequence to an OMF file, setting In's and Out's won't work. Using OMF always exports the entire sequence, regardless of how In's and Out's are set.

Consequently, if your OMF file threatens to be larger than 2 GB, turn off some of the Track Visibility lights on the far left of your Timeline. Only tracks who's visibility lights are lit (glowing green) will be exported. Then, export in sections, where each OMF file is, say, tracks 1 thru 6 and the second section is tracks 7 thru 12.

Now, in order to open an OMF file in ProTools, you'll need the DV Toolkit, an extra cost option for ProTools LE. If you only do one or two mixes a year, you will probably be better served getting Bias Inc.'s "Deck," which opens OMF files without extra cost options.

However, as I already own DV Toolkit, I'll continue this illustration using ProTools.

2. Select the OMF file you just created and click "Open." ProTools will ask you to name the session.

3. On the next dialog box, change the default file format to AIF. Although WAVs are supported by Final Cut, and they are the default audio file format on Windows, I've never had a compatibility problem using AIFs. 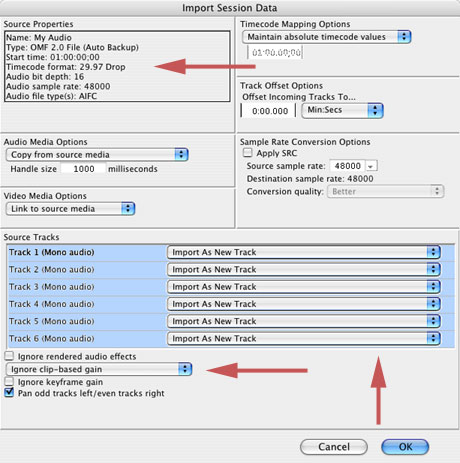 Then, the big OMF import screen appears. Most of the defaults in the OMF screen are OK. However, there are three I want to call to your attention: 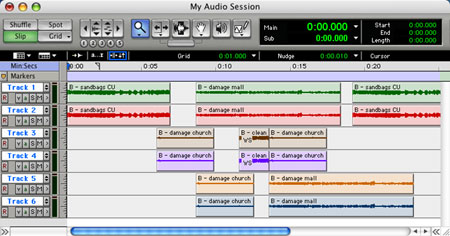 5) Poof! All your clips open, as individual clips, inside a new ProTools session; ready to mix.

When you are done working your audio magic, it's time to get your audio out of ProTools and into Final Cut. 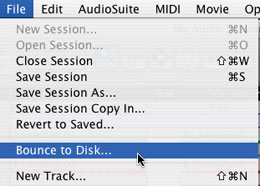 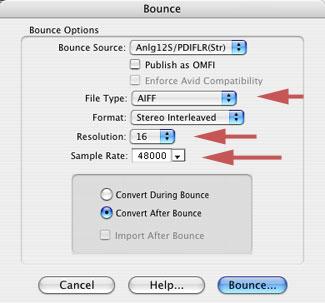 2.Set the parameters to AIFF, 48K, 16-bit, to match the format of your original FCP sequence.

ProTools will mix your project and save it to your hard disk as a stereo AIFF file.

Open Final Cut and import this file as you would any other audio file.

Edit it to the Timeline so it starts at the beginning of your sequence, or the In, depending upon whether you exported the entire sequence or just a portion.

Because all files are "all digital all the time," frame sync will be maintained throughout the entire process. As long as you don't add, delete or change the speed of an audio clip within ProTools, which would alter sync, all audio will come back perfectly synced with video. In all the years I've been using process, I've never had a sync problem.

And, now that you know how to do it, you can use this to improve your audio as well.

Note: After this was first published, the following two comments were received.

Eric Peacock: OMF audio export [also] works nicely in Digital Performer, which does multi-channel mixes up to 10.1 and pretty much everything ProTools or any other audio app does. This is what I use for my music, which is usually 20 or more tracks with lots of MIDI layered in so it's a vital part of my workflow. It also works well to export a low rez video clip of the project and load that into Digital Performer so I can align precise effects with key events and get visual feedback.

I figure it's pretty much a given that any OMF supporting app will work as you detailed with ProTools, but it's nice to know that more economical software packages like Digital Performer can be used in the same workflow.

Larry replies: Thanks, Eric. For creating low-rez video for mixing, I will most often create a small (160 x 120) QuickTime movie using the Video codec. This displays fine in ProTools (and, I suspect, Digital Performer), doesn't take up much screen space, and decompresses using very little CPU overhead, which is perfect for audio mixing.

David Morgan:I too use Pro tools. I find myself wishing that there was a fluid in and out to Pro Tools like AVID is advertising with their Xpress Pro application.

However, considering the situation where OMF only goes one way, out of FCP into Pro Tools, I find myself wondering what's the use? It would seem that exporting AIFF out and in would be just as good without laying out $1,000 for DV Toolkit, simply to get OMF support into ProTools.

Larry replies: The difference between AIF and OMF is that using OMF allows you to retain each clip as an individual entity retaining handles and the ability to move that clip separately from other clips on the same track.. Exporting as an AIF means that all clips on that track are merged into one long clip with no handles.

OMF is more flexible. Whether that flexibility is worth $1,000 depends upon how much you intend to move files between the two applications.

This article is from the August 04 issue of "Larry's FCP Newsletter," a FREE, very cool, monthly Final Cut Pro newsletter -- click here to subscribe. Or, visit his website at: www.larryjordan.biz.

Larry Jordan is a post-production consultant, and an Apple-Certified Trainer in Digital Media, with over 25 years experience as producer, director and editor with network, local and corporate credits. Based in Los Angeles, he's a member of both the Directors Guild and Producers Guild.