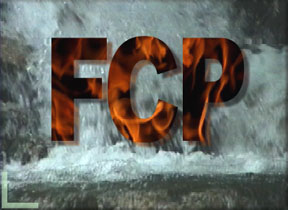 Travel Mattes Alpha and Luma
and the Alpha Channel

We have worked with Mattes, Masks, and Color Keys (Mattes and Masks in FCP) to composite images. As you recall we placed a background image on V-1, a second image on V-2 and then placed the Matte or Mask of our choice (Mask Shape- Image Mask - Four-Point Garbage Matte, etc.) onto the clip on V-2, loaded the Matte in the Viewer and adjusted the parameters of the Matte to control which part of the image on V-2 became transparent and which remained non-transparent.

While Travel Mattes Alpha and Luma also control which parts of an image become transparent, they are different and work differently from the other mattes that are available in FCP. Both of these travel mattes key from luminosity and work directly with the clip that is directly below on the TL. Those parts of the image that are bright, like white text, become the area of transparency, those parts that are dark will be non-transparent. Travel Mattes Alpha and Luma offer the unique ability to shape the image of one video track using a second video track as a stencil. The video which is shaped or framed by the stencil video will then float over a background video. The result will be moving video in the shape of text floating on a background of moving video. This being FCP the text is keyframable.

Let's use Travel Matte Alpha and later we'll look at how it works. First I place my background video of a waterfall on V-1. 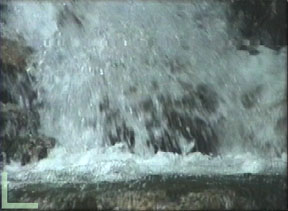 In my example I will use the Text Generator which will create white text on a transparent background. The first thing I will do is place the Playhead on my background clip, V-1 and hit the 'Mark Clip' button at the bottom of the Canvas window. This will set 'in and out' points in the Timeline for my V-1 background clip. Now I target V-2 by turning on the Yellow film icon at the left of the Timeline to make V-2 my target track. I drag the Text generator from the Effects Browser to the Canvas window and drop on 'Overwrite'. Because I have set 'in and out' points on my V-1 clip the Text Generator will drop into V-2 and have same duration as V-1.

I double click on my Text Generator on V-2 to load it into the Viewer and select the Controls tab. We are going to use our text as a stencil so we want to have very thick massive type. The larger the type the more video will show through in the shape of the letters. Arial Black is about the thickest font that comes stock on the Mac. I set my font size to 220 and font color to white. 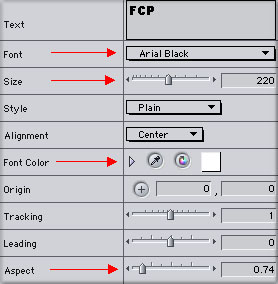 Looking at my Canvas window I see the letters "FCP" as white text on top of my background video. But it's too high in the frame. Setting my Canvas window to 'image + wire frame' I use the Move tool to pull my text down. I also want to have the text fill more of the screen so in the Text Control box I set 0.74 in the Aspect settings. This changes the shape of my text making it taller. I also want my text to have a drop shadow so I click on the Motions tab and check the Drop Shadow box.

Now that I have my text enlarged and positioned I am ready to place my third element, fire, onto V-3. With my Playhead on the clips in the TL, I 'Mark Clip' from the Canvas window and target video track three. I drag my fire clip to the Canvas and do an 'Overwrite' which places the fire clip on V-3 with the same duration as the clips on V-1 and V-2. 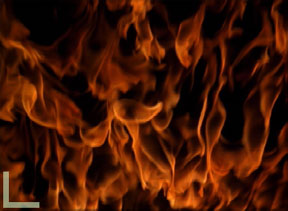 Now we are ready to apply our Travel Matte Alpha. But don't go looking for it in your Effects Browser, it's not there. We are not applying a matte here. From the Menu > Modify> Composite Mode. You will see that the default Composite setting is 'Normal'. We have 12 different Composite Modes to choose from. Each Composite Mode works by using a different method of blending two clips. What is and what is not transparent is based on the luminosity and chroma of the clips. Unlike matte filters found in the Effects Browser, there are no controls in Composites Modes, no way to change their parameters, no keyboard shortcuts, and they can not be Keyframed either. Composites are like a 'one trick pony'. 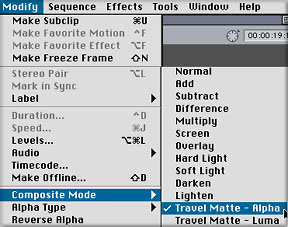 So How Does This Work

The video clips that we work with in FCP are comprised of three channels, RGB; Red, Green and Blue, these are the Primary colors. These three channels carry all the visual information that make up the color values of the images that we see on the screen. Each channel carries information about it's own color and each color can range from 0 to 255. A value of 0 would be no color at all and a value of 255 would be the maximum density of that color, either Red, Green, or Blue. Each and every pixel has three channels of information and each channel's color value can range from 0 to 255. Every pixel has it's own color value and can be different from every other pixel. With all the possible different variations from 0 to 255 for each channel and the fact that the three channels combine to produce the final color means there are millions of different colors that can be achieved.

Video has three channels and these channels carry the color information. An Alpha channel is a fourth channel which is created by FCP and deals only with luma information and is comprised of 256 levels of gray. The Alpha channel carries information about which areas of the image (in the three color channels) will become transparent, which areas will remain non-transparent, and all the semi-transparent values in between. This fourth channel is not unlike the color channels. It too is comprised of pixels (it is a grayscale) and each pixel can have it's own value from 0 to 255. The values from 0 to 255 do not relate to color but rather to transparency. These Alpha pixels are not inherently transparent but rather they carry the information about how transparent or non transparent the color pixel that it represents will be. A pixel in an Alpha channel that has a value of 0 will be completely non transparent. A pixel that has a value of 255 will be completely transparent. Pixel values that fall between these two outer numbers will have varying degrees of transparency, a value of 127 would be 50% transparent. Again, we are talking about the Alpha channel containing 'information' regarding the amount of transparency on a pixel by pixel basis.

A good example of an Alpha channel is found in the Text Generator. When we set type in FCP and have a transparent background surrounding the type, the information regarding transparency is carried in the Alpha channel that FCP created for our text.

I mentioned that Composite Modes are not adjustable or keyframable which is correct. You can change the way that the Alpha channel interprets transparency by changing the Luminosity of the clip itself, and you can keyframe these changes in the clip as well. Changing the brightness level of the clip will change how the Travel matte will record transparency. This will give you the ability to modify which parts of the image are transparent, semi-transparent, or non-transparent over time.

In my example above I use the Text Generator to create my stencil video. You can use art from other applications like Photoshop. In my example I wanted my type to be taller, to fill more of the screen so I used the Aspect setting in the Text Controls box. This will enlarge the text and the text will stay sharp however you can only enlarge so much before you run into the Bounding box. Another way to enlarge the text is to open 'wire frame + image' in the Canvas window, click on the corner of the blue Bounding box and stretch up. While you're text will be bigger there will be some distortion, soft edges, as you enlarge. The best way to have really large text would be to set it the size you want in Photoshop first and then import into FCP.

The ability to control the transparency of a video clip or parts of the video clip lie at the heart of all the compositing work we do in FCP.