How to do The Blues


Soundtrack and the new GarageBand are fantastic tools for anyone who needs to add a soundtrack to their projects. If you have a music background, these tools provide a canvas with which to work. If you have no musical background, these tools are a little more than a fun toy unless you can somehow unlock the codes of making music. And that's just what we are going to do with this tutorial. We'll create a tune around a blues progression, a popular form of music that has a simple, repetitive chord structure.

Now don't get freaked out about chord structures. I'll show you how to approach this in layman's terms - a "play by numbers" approach for all who want an easy way to approach loop based music creation.

If you want a bit of theory, read on. If you just want to get into creating, skip the music lesson.

Blues theory in a nutshell.
First, let's take a look at The Blues. We're going to create blues in the key of C. For reference, here is what a typical blues progression looks like to a jazz musician (rhythm guitar part):

This progression, as are most blues progressions, is in 4/4 time and is 12 bars long. In simple terms, that means there are 4 beats per measure, or bar, and there are 12 of these measures - repeat.

The letters above the staff indicate the chord changes and when to change them. The first chord is a C chord and we'll number this 1 to indicate it's the primary or "root" chord and is played for 4 measures or 16 beats. The next chord is an F chord. This is 5 half steps (semitones) above our root, or 1, and played for two measures. Next, back to our root or C for two measures. Then up 7 half steps (semitones) to G7 for one measure, back to F for one measure and then finally to our root, or C, for the final 2 measures. That's 12 bars of blues!

Theory over, lets program (compose) in Soundtrack
The Blues is very flexible musically and is a foundational jazz form. Blues progression, or structure, is a standard music bed on which soloists can improvise or "jam" around. I have provided you with two downloads so that you can hear and see my SoundTrack project. If you have SoundTrack, download the completed track "Blues in C" SoundTrack Project .loop file, (120k). This project file will open in SoundTrack for you. We will work together using Soundtrack and loops from the PowerFX loop library that installs with Soundtrack. If SoundTrack is not available to you, here is the completed "Blues in C" project as a QT movie, (292k).

First we need a beat. We'll audition the drum track by selecting Search and then the Drums button. I like the loop Drummers of Motown 03. 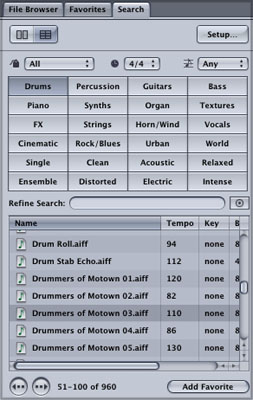 When you find a beat you like, drag it over to the timeline and then stretch it out over 12 bars. Let's slow the tempo down to 105 BPM and set the working key to C from the pulldown.

You may notice that the change of key doesn't affect the drum track. This is because drums are atonal and do not have a key. In other words, they play rhythm only and no melody.

Next we'll add a bass line. Select the bass button from the search window and audition some base lines. Click play, or spacebar, and have the drum loop play while you audition the bass and select one that fits well with your drummer. The cool thing about Soundtrack is that it will play back any loop "in key" with the key of the timeline. In musical terms it "transposes" the loops to fit the current key you have set on the timeline.

Ok, nice groove. Now we're going to do a little magic to the guitar and bass to create a blues progression. Select the bass track and position the playhead at bar 5. Hit the S key to split the track. Make another split at bars 7, 9, 10, and 11. Repeat this for the guitar track.

Now we are going to create the illusion that our band members are playing their riffs according to the standard blues progression or framework. Blues played in the key of C start on a C chord and then go to an F chord in measure 5. Control click the bass track segment in bar 5 and transpose the segment +5 (This changes the loop from the root of C to F, which is 5 semitones, or half steps, above C). You'll notice that a small +5 is added to the segment. Do the same thing for the guitar track. In a standard blues progression, bars 7 and 8 go back to a C chord so we'll leave this segment as is. Bar 9 is a G7 chord so we'll transpose this +7 in the bass and guitar tracks. Finally, bar 10 is an F chord so again, transpose bass and guitar to +5. Your tracks should look like this:

Not to bad. You could simply let this loop and you would have a nice blues music bed for that documentary about southern living you're working on!

Creating an arrangement
Let' create a more sophisticated arrangement by copying and pasting these 12 bars a number of times. Copy these 12 bars and then past them twice, creating a total of 36 bars. We'll then build these basic tracks up with a soloist and a horn section.

Select all (command-a), copy (command-c) and position the playhead at bar 13 and paste twice (command-v).

Now we'll add some horns to the mix. After auditioning some horn tracks, I am going to select R&B Horn Section02. I'm going to have the horns come in at bar 25 and extend them for 12 bars. Interesting thing here; you don't need to transpose the horn section. Why? Well without going into it too deeply, the horns are all playing in unison (same notes) and the notes they are playing fit over the progression without clashing.

Time to bring it on home. Let's copy the last 12 bars of drums, bass, guitar, and horns and past them at bar 37. Let's also copy the 12 bars of harmonica solo and paste it at bar 37 also. Now we've got the whole band jammin'.

To add a touch of excitement to the final 12 bars, will add a key change. From Soundtrack's pulldown menu select View>Show Master Envelopes. Double click the Transpose envelope at bar 37. This will add an envelope point (what we know as a keyframe).

Now click on the envelope point and raise it to 1 which is one semitone or 1/2 step. We're now playing in the key of C# (practically no musician would choose to play in this key because its a difficult key to solo in - but our band loves it and doesn't miss a beat).

Let's add a horn note at bar 36 to help smooth the transition to the new key. I'm going to add the first two beats from R&B Horn Section04 at beats 3 and 4 of measure 36 (36.3). This note serves as a lead-in to the key change. Finally add a fade out beginning at bar 45. Mix your tracks to your liking and you've got The Blues in C. 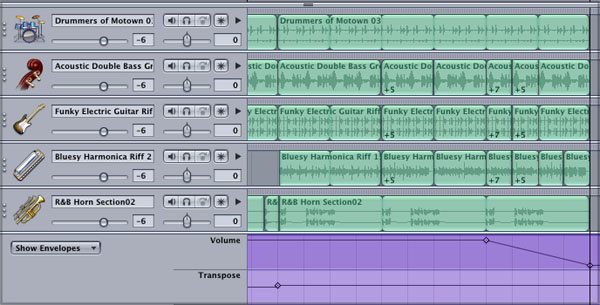 I hope this tutorial has given you a place to start experimenting from. Experiment with a slow blues progression and different soloists. Once you know some rules, you can begin to break them and create some interesting tunes to add to your productions. When you get the hang of transposing loops, there is no limit to the different progressions you can create. The bottom line with creating music with Soundtrack is, if it sounds good, do it! If you would like to see some other songs recreated, or if you have any questions drop me a line.