The release of Adobe’s Production Premium CS5 bundle brings a refined interface, dozens of under-the-hood improvements and several “wow” features to the integrated application suite. This series of reviews will evaluate what is new, improved, and useful in CS5 Photoshop, Premiere, After Effects, and onLocation CS5 Mac with video professionals in mind. Also in the queue is a look at the Adobe Mercury Playback Engine and how it uses NVIDIA GPU cards to provide a GPU-accelerated real time editing and effects in multi format projects. Our first look is at Photoshop CS5 Extended.

Preamble. Why discuss CS5 Photoshop as a video editing tool? The answer is two fold. Photoshop is an indispensable content creation tool for the video professional. Its unique capabilities enable editors to prepare graphics for video, create titles, logos and backgrounds, enhance images, utilize mattes and masks, and it provides basic video editing capabilities as well. If you edit video for a living, Photoshop is an essential tool.

New: Content Aware Fill. The most discussed new feature of Photoshop CS5 is Content-Aware Fill, and for good reason.  This amazing tool removes undesired image elements from a photograph or image, and replaces it with content that replicates the noise, lighting, and look of the surrounding area. The unwanted elements can be as simple as a telephone pole or wire, or as complicated as a person or tree. For many images and elements, the tool works like magic. Select the image element to be removed, hit delete and choose content aware fill in the drop down menu, which is the default election.  Processing depends on computer speed and image complexity. The processed image and fill content, in my view, is more realistic, natural and seamless than using the clone tool.

Don’t expect perfect results for every image or element. An image that overlaps another image element may require feathering the selection, or creating a tighter selection to get better results.  In small areas, CAF worked best because the selected element and sampling area are both small.  When a larger element was selected, the larger sampling area was more likely to provide a fill that did not match the target area.  Additional touch up may be necessary, or the image simply doesn’t lend itself to the tool. While not every element can be eliminated perfectly, the tool is a genuine time saver, and a great starting point for further clean up. Here is a before/after example of a typical use: 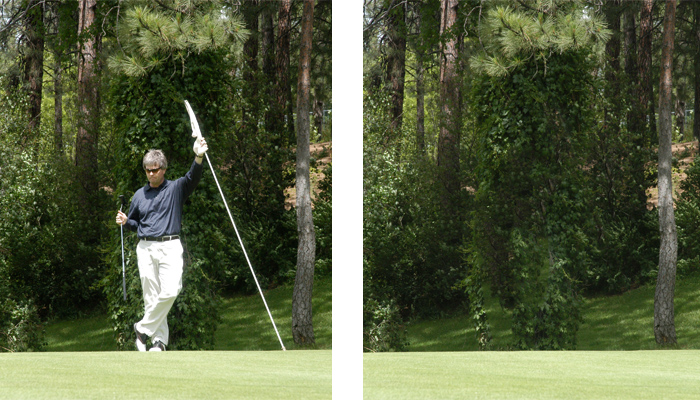 The tool has other uses as well. Select an element, move it to a different layer, and then fill the original selection with Content Aware Fill. Then move the image in the new layer to a different location in the photo to create an entirely different look. Nice. It would be great to see this incorporated for video footage.

Improved: 64-Bit Cocoa Environment  Photoshop CS5 Mac is both a 64-bit application and written entirely in Cocoa, Apple's native object-oriented authoring program for OS X. Because Snow Leopard doesn’t boot, by default, into 64-bit mode, hold down the 6-4 keys when starting your computer.

A 64-bit Photoshop accesses physical RAM and multiple cores, rather than swapping memory. More than 4 GB/s of RAM is required and allocated in PS’s preferences. Most gains are experienced when working with high resolution images and for basic motion tasks, such as scaling, masking, and rotation. I saw up to a 200% increase in performance in certain operations over CS3, and substantial improvements over CS4 -- but again mostly when working with larger images.

The downside is that 3rd party filters and drivers are, for the most part, not yet 64-bit, including some supplied by Adobe. Launch PS as a 32-bit application if you need to use these filters. 64-bit compatibility will improve over time, but be aware of this limitation.

Improved: Refined Streamline Interface. Dozens of small but significant improvements in tools and their capabilities populate PS CS5 Mac. The interface remains comfortably familiar, but with some nice changes. Many tools icons have been modernized for easier identification, the PS’s interface can be instantly customized using buttons to access different workspaces. A downloadable utility facilitates further customization.

An improved clone stamp tool better aligns the clone target with a transparent brush. The crop tool displays a lined grid to assist in composing the crop. Straightening an image is now a one click process, rather than a series of commands. The crop tool’s new grid positioning guide produces a perspective crop that simultaneously straightens a skewed image. Scrubby zoom speeds zooming by dragging the zoom tool across the image. A convenient mini Bridge facilitates access to your images without leaving Photoshop. A file can be dragged from directly from the desktop to an open Photoshop document where it populates its own layer.

Improved: Refine Edge Tools. CS5 also provides its own built in tools simplify the tedious task of extracting an element from a photograph where the edges are complex, such as wispy hair.

The new Edge Detection feature set is a component of the Refine Edge tool in PS CS5. After making a rough selection of an image element, elect the Refine Edge tool, and you are presented with several new intelligent selection tools to further refine the selection. Among them is a tool to attenuate the background “contaminating” color on the edges of the selection. The matte will be erased based on color and content of the image using a brush to identify the unwanted color. In addition, the new smart radius feature distinguishes between high and low contrast edges to further refine the selection. These new tools facilitate fast, sophisticated selection capabilities without the need of 3rd party plug ins. Videographers can now composite still image elements over video, or create multilayer composited files much easier with these new tools. Complex edges still presented challenges, but these new tools are impressive.

New: Puppet Warp. The Puppet Warp feature, previously an After Effects exclusive, has found its way to Photoshop. Select an image object or element, and use the tool to apply a mesh to the element. What results is an inverse kinematic meshed object to which positional joints can be attached. Position the pivot points or joints, and move them, and Photoshop adjusts the rest of the image correspondingly and realistically. A typical use would be to animate the arms, legs, head and torso of an image. Or to reposition and warp an image element using the Content Aware Fill command. The tool provides a simplified approach to innovative content creation, but more is involved. Hopefully, if Adobe can move this feature to Photoshop, perhaps it can move Content Aware Fill to motion graphics.

Summing Up On CS5 Photoshop.  On balance, the new 64-bit Photoshop Mac provides significant performance increases in the proper hardware and software environment, improved workflow, a refined and more intuitive interface, new features and more to maximize a videographer’s creative potential. The availability of Content Aware Fill is more than a wow feature emblematic of this upgrade. It suggests where 64-bit, multithreading applications are headed -- which is good news to all of us.

David A. Saraceno is a motion graphics artist located in Spokane, Washington. He runs a video blog and review site called secondchairvideo that provides up to date information on most things Final Cut Pro and video related.  He has written for DV Magazine, AV Video, MacHome Journal, and several state and national legal technology magazines. David moderates several forums on 2-pop.com, is active on the Apple Support Discussions forum for their Pro Applications, ranked as among the highest contributor as a Level IV in the pro apps forums, and contributes at dvxuser.com. [Top]
This article first appeared on lafcpug and is reprinted here with permission.