Some months ago, I was looking for a project that would let me explore FCP-X’s multi-cam capabilities. Then I heard about “The Nash” – Phoenix’s new Jazz education and performance venue.  I figured a project with them might be a great opportunity to learn something useful about the subject, so after securing permission from the venue, I pulled together a volunteer crew for a live performance shoot featuring a five-piece jazz combo drawn from the graduate music students at Arizona State University.

Saturday morning we all converged on the facility - twenty or so volunteers, 14 cameras (7DSLRs and 7GoPros) and five musicians. 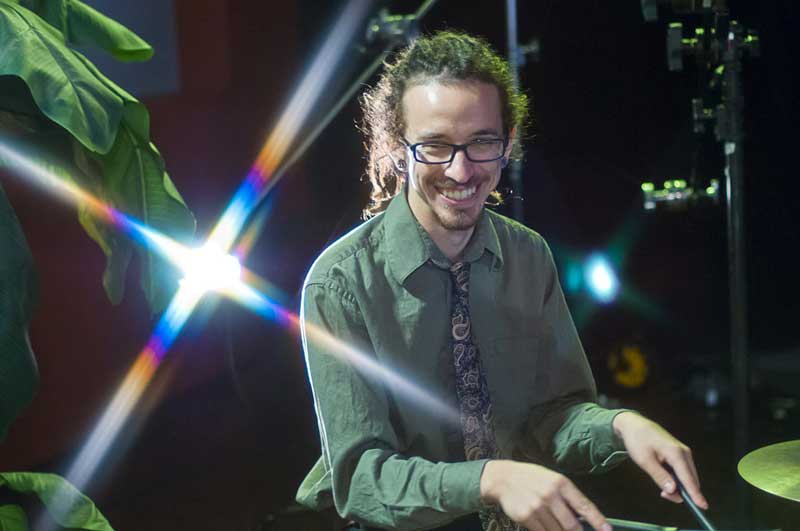 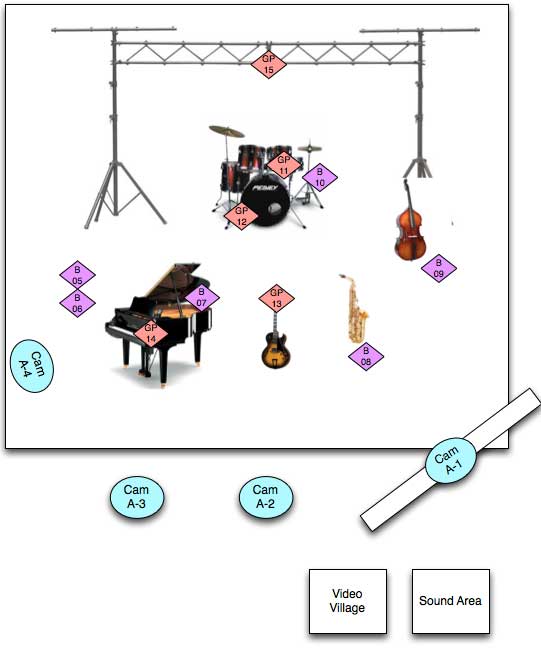 I built my initial camera plot around four primary manned DSLRs (the blue ovals on the plot above) positioned in a rough arc aimed at the band. Monitor lines from these to video village would let me direct these to avoid getting stuck with four simultaneous medium shots of the same player at the same time.

To add a more active view, we had one stabilizer-mounted “Rover” DSLR to grab behind the scenes shots and interesting angles. 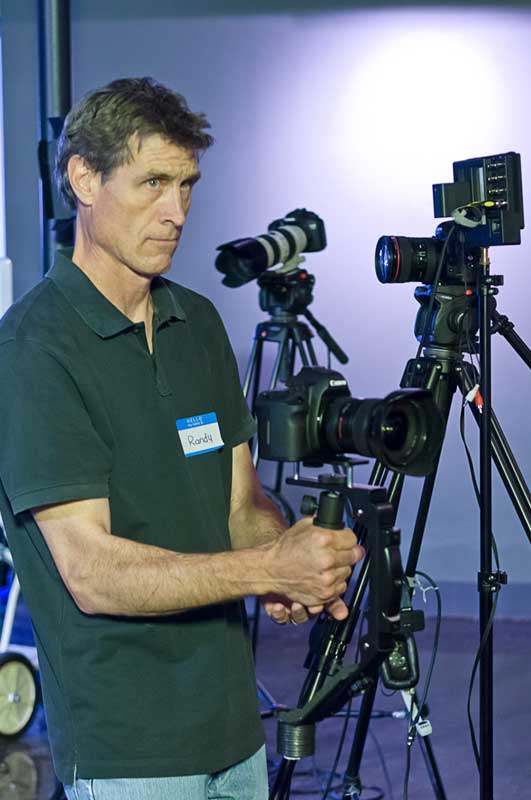 We recorded two original compositions created by the band members, each played through two times for a total of four recorded performances.

One thing I learned from this project, is how quickly multi-cam chews through storage!

Just making the initial hard drive backup disk images of the fourteen 32gig cards we shot on a pair of laptops  kept us on set almost 4 hours after the wrap.

The background processing of such a huge mass of footage meant my edit machine (a pre-thunderbolt MacBook Pro i7) had to do a lot of transcoding over the days directly after the initial shoot.

The whole process really made me appreciate the software engineers at Apple for building X around a  “go ahead and work while the housekeeping stuff is happening in the background” model. 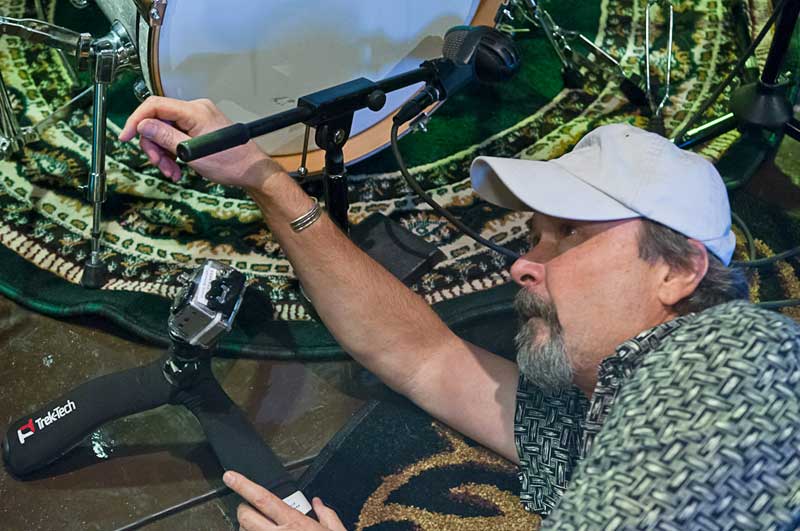 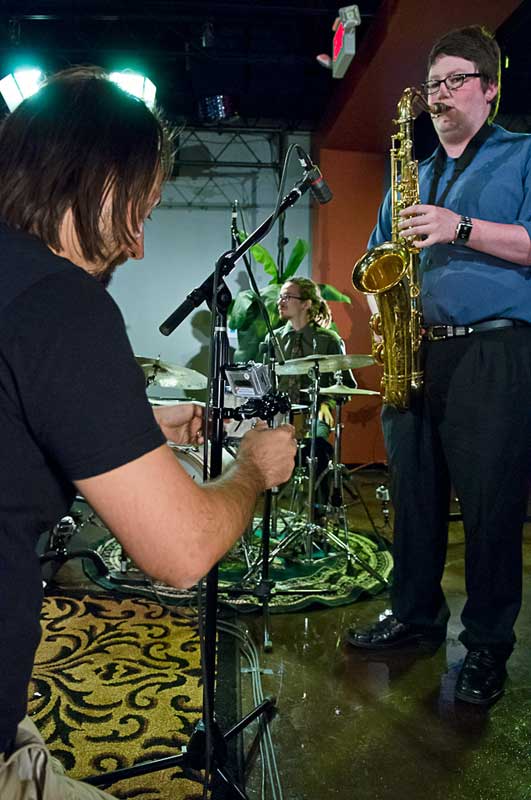 That approach let me do the work I needed to do in project organization and even actual edit decision-making while the file preparation was still happening under the hood.

When I sat down with FCP-X to figure out my editing strategy, I initially thought I’d have to go through the entire six hours plus of performance footage, applying keywords to everything.

And, honestly, I completely wasted a day or two on that approach.

While I understand that spending time in X’s Event Browser doing keyword application is one of the most powerful parts of the program, for a live performance situation like my multi-cam shoot, it’s really just an unnecessary optional step.

Unless you are building an archive of performances so you can go back at a later date and pull out clips by a instrument or some other tag – significant keywording isn’t particularly valuable for a “real time” post-switch.

What WAS important to me was to sort all my shots into four simple “buckets.”

I picked a simple four-character tag where “S1T1” would indicate the the clip belonged to Song 1 Take 1 and so forth.

That’s really all the tagging that was needed to let me isolate each song for multi-cam post switching.

I did initially worry that X would “bog down” with 15 tracks (video plus audio) in multi-cam view — but with X’s built in proxy workflow, the program was able to display and switch all 14 cameras plus my master audio track without missing a beat.

The only real problem turned out to be that while X was fine managing 15 tracks of content, my BRAIN wasn’t nearly as agile!

Try as I might, I just couldn’t monitor 14 images and feel like I was making the best shot choices in real time. There was simply too much visual data to monitor at once, particularly with five of those cameras always in motion seeking better shots. 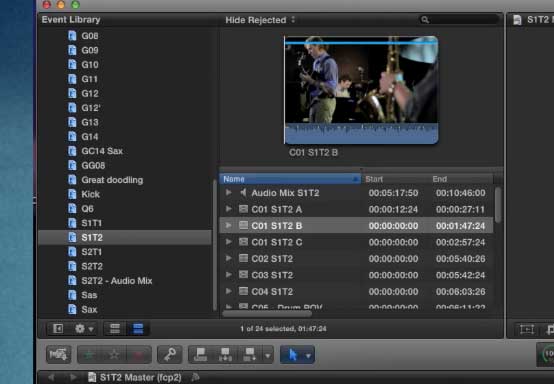 The Song/Take tags in the FCP-X Event Browser 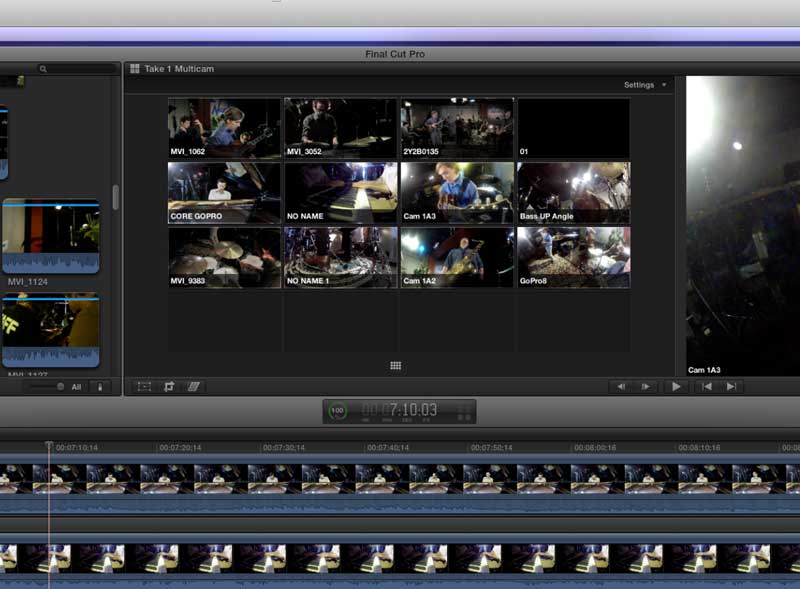 Thankfully, X is extremely flexible in letting you approach the same task in different ways, so after lots of trial and error I started using a “divide and conquor” strategy for knowing where and when to focus my attention.

The key was not to watch everything at once, but instead focus on my primary four cameras to see which of those shots were the most critical at any point in the performance. With a few virtual rehearsals, I was able to build a “first switch” out of my selected primaries— then to refine the resulting base edit by adding alternate shots and tweaking choices on subsequent passes.

In the end, X turned out to be an absolutely excellent tool for a project like this. 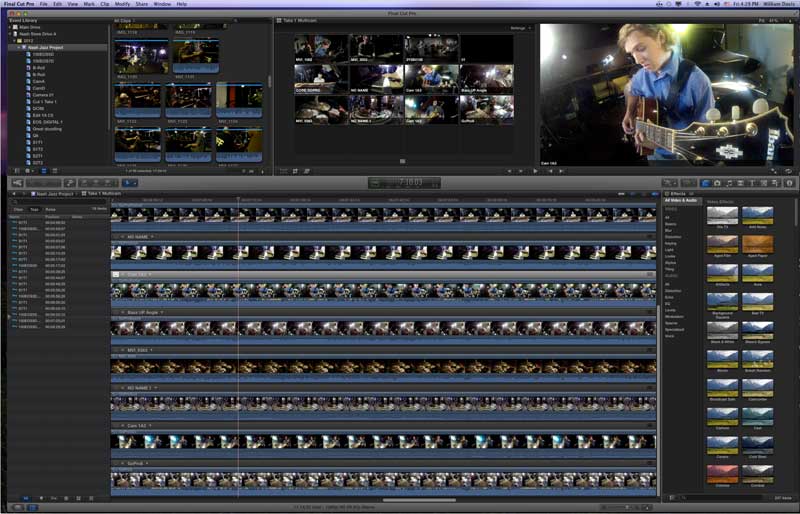 A wider capture of the FCP-X angle viewer with the final 8 of 12 camera tracks shown.

It’s real-time proxies let me import footage and get to work fast. The multi-cam tools were critical to be able to view and choose (or restrict!) my focus on some or all of my cameras. And I was able to cut an extremely complex project down to manageable size in just a few days.

If you haven’t yet spent much time editing in X, I’d caution you not try to download it and immediately attempt to cut a complex project on it — regardless of how experienced an editor you might be. As has been discussed extensively in the professional video editing community, FCP-X operates quite a bit differently from most other editing software.

But once you do come to understand it’s unique new toolset, you start to see how it’s database orientation and many timeline strengths help make not just editing, but organizing and re-arranging a complex project like mine a lot easier than you might expect. 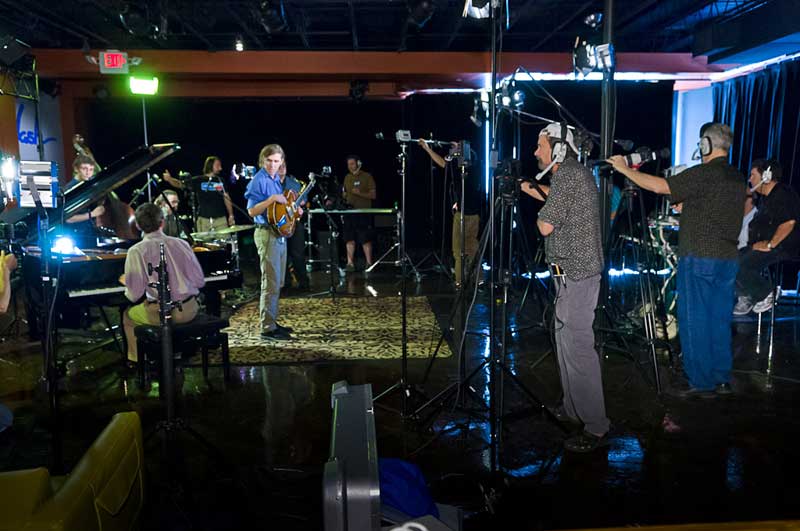 I took on this project because I look around and see a world where quality cameras are becoming less expensive and more available – and I wanted to see if FCP-X’s new multi-cam capabilities were a good fit for today’s new “cameras everywhere” reality.

The answer for me was a clear and convincing “absolutely.”

When all was said and done, X really helped me create order out of the natural chaos of a complex project like this multi-cam music shoot.

It let me easily see, judge, manipulate, organize, correct and edit my way through 14 cameras times four performances way more agily and efficiently than I had expected.

In the end, I came away convinced that while my shoot was all about Jazz, using FCP-X for the edit really ROCKED.

One of the performance videos is posted HERE:

has been editing and writing about video for more than 20 years. He’s the creator of StartEditingNow! – editing instruction curriculum with licensed practice content for elementary, middle school and college editing instruction. He also writes for magazines and web sites and lectures about video production nationwide. He can be contacted at: newvideo@fastq.com

This article first appeared on lacpug and is reprinted here with permission.