Following Rob Morgan’s Final Cut Studio shootout between Compressor 3 and 3.5, and Motion 3 and Motion 4, I decided to test further to determine if I could produce the same results.  Rob timed Compressor encodes and Motion RAM previews in Final Cut Studio 2 and Final Cut Pro (2009) using identical footage and a high definition Motion template.  Released in mid-2009, the latest Final Cut Studio should have been faster in these tests to FCS2, which was released following NAB in 2007.  At least that was the street wisdom.  However, Rob confirmed that Final Cut Pro 2 produced faster encodes and renders for both tests.  I performed these two tests, and four additional ones on my test machine, and the results are below.

My Test MacPro.  I used a Mac Pro Quad-Core Intel Xeon 2.26 GHz Nehalem  with two processors, 12GB of RAM, and a NVIDIA GeForce GT 120 with 512 MB/s VRAM.  A clean install of Snow Leopard 10.6.2 with all upgrades was made on separate, identical Seagate 7200.11 boot hard drives.   Final Cut Studio 2 was installed one volume, and all apps were updated to their latest versions.  Final Cut Studio (2009) was installed in the same manner on the other volume.

My Test Files:  For the additional testing, I used a one minute long Motion JPEG video clip (1920x1080i@29.97fps).  An interlaced clip was selected in part to test the frame based de-interlace function of Compressor 3.0 and 3.5.  Identical presets for encoding and transcoding for Compressor were used, and when not available, the preset was duplicated in the other program.  The test file resided, and the renders were made to a dedicated internal SATA media drive.

The Tests.  I ran both of Rob’s tests on my machine.  Those included a Compressor test using the wildlifeHD Reel 720p sample from Quicktime's HD Gallery.  This was encoded to the HD DVD H.264 60 minute preset in Compressor.  This preset was used in 3.0 and 3.5 because it was a comparable h.264 preset. The second duplicated test was a RAM preview of the stock template Blocks-Detail HD, rendered all 900 frames.   For the other tests, the Motion JPEG file was used as a source file.  I chose two HDV encodes because it is a common high definition format and taxes the CPU.  I also placed the Motion JPEG footage in a ProRes 422 FCP sequence, and timed the full, unlimited render.  Finally, I converted the 1920x1080 Motion JPEG interlaced footage to a DVCProHD 1280/720 progressive file using Compressor’s frame controls, which again taxes the computer.  In each instance, a QuickCluster was used with the maximum number of instances available for the MacPro.

Here are my results: 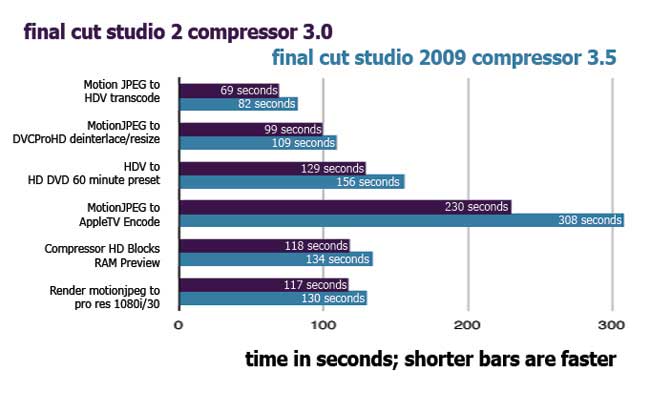 It’s difficult to assess why the latest version of Final Cut Studio is slower in these tests over a two year old version using the same hardware and identical tests and presets.  There are rumors that a 64-bit version of Final Cut Studio is being developed following recent releases of 64-bit versions of Aperture and Logic. When and if we will see this release is uncertain, and Apple isn’t talking.

David A. Saraceno is a motion graphics artist located in Spokane, Washington. He runs a video blog and review site called secondchairvideo that provides up to date information on most things Final Cut Pro and video related.  He has written for DV Magazine, AV Video, MacHome Journal, and several state and national legal technology magazines. David moderates several forums on 2-pop.com, is active on the Apple Support Discussions forum for their Pro Applications, ranked as among the highest contributor as a Level IV in the pro apps forums, and contributes at dvxuser.com. [Top]
This article first appeared on lafcpug and is reprinted here with permission.