The 'Creating Motion Graphics in LiveType' tutorial is included at no additional charge.


While most of us use Final Cut Pro, we have always been aware of FCP's little brother, Final Cut Express. If you have ever had the chance to see or work with FCE, it's obvious that the FCE interface is exactly the same as FCP's interface and it's workflow is the same as well. So what is the difference between the two? The most obvious difference is the price, with Final Cut Studio 3 costing $999.00 for it's suite of applications, while Final Cut Express 4 costs $199.00 and only comes with LiveType. The other main difference is that some of the advanced features found in FCP are not included in FCE. While there are lists that show which features are missing from FCE, the lists do little to explain what this really means to the user.

So, where am I going with all this? A few weeks ago I got a copy of Steve Martin's 'Final Cut Express' tutorial to review. Often I have been asked what the main differences are between FCP and FCE, which features are omitted and how do these missing elements impact editing. So I posed these questions to Steve. (Actually I asked him if he could put together a small article that would list the feature differences between FCE and FCP, but I also asked if he could elaborate on these differences and what they would mean to an editor.) In his 'Final Cut Express and the Middle Child Syndrome' article, he has included 6 excerpts from his Final Cut Express 4 tutorial that demonstrate how to workaround the absence of these features.

So now, on to the review. As with all the other tutorial products from Ripple Training, the production values of this tutorial are excellent. Because some people who have purchased FCE are new, not only to FCE but new to the Mac as well, Steve Martin introduces the viewer to the Mac and provides the viewer with the information necessary for running Final Cut Express on the Mac. Steve then demonstrates how to set up FCE and provides a complete tour of the FCE interface, menu and keyboard shortcuts. The tutorial starts with the basic FCE set up and introduction, acquiring media from both tape and memory media cards, editing in FCE with excellent lessons using the tool set in FCE, working with transitions, filters, audio, markers, trimming, titles, color correcting, motion effects and finally on to the output of your finished project.

As with his other Ripple Training tutorials, Steve Martin delivers comfortable, evenly paced instructions, often with a little bit of humor. The lessons are enjoyable to watch, and easy to understand. Each chapter has its own, on screen menu, for easy navigation. The Final Cut Express 4 - Express Yourself tutorial is not a reworked FCP tutorial, but rather was created from scratch. Final Cut Express ships with the LiveType application, so Ripple Training includes, as a bonus, a LiveType tutorial, free of charge. 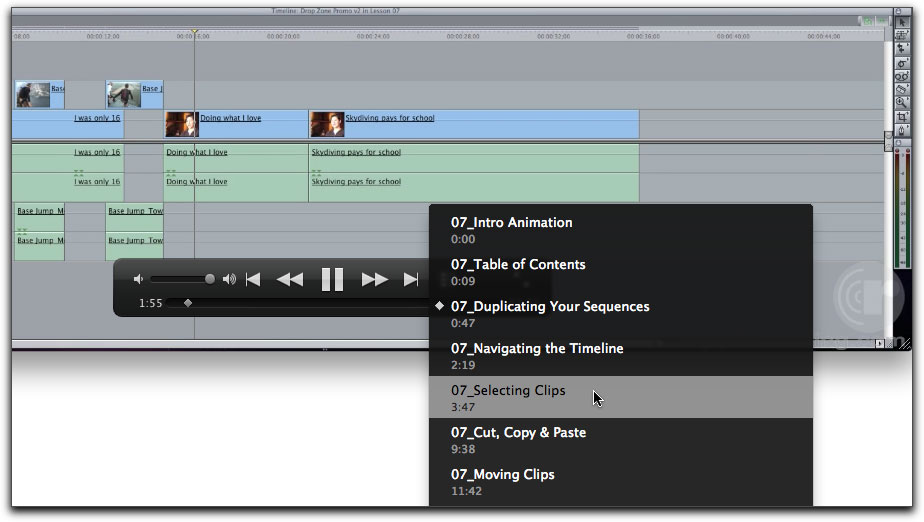 'Final Cut Express - Express Yourself' is offered at Ripple Training's web site and when purchased, a link to the tutorial is generated and sent via email. Once clicked, the tutorials appear in the Podcast section of iTunes. For those of you who are new to iTunes download, Ripple Training offers a FAQ which takes you through the iTunes download and setup process. The Final Cut Express tutorial plays on Macs and Windows PCs computers, the iPad and on ATV as well. The tutorial is 15 chapters long and has a run time of just over five hours. Steve teaches Final Cut Express by working through projects and Ripple Training supplies, as a download, all the Projects and media that are used in the tutorial so you can work along with Steve and build the projects demonstrated in the lessons. The Projects and media download file is large at 1.1 gigs, so your download times will depend on your internet connection speed. However, having the projects and media to work with really enhances the learning process and is worth the wait for the download.