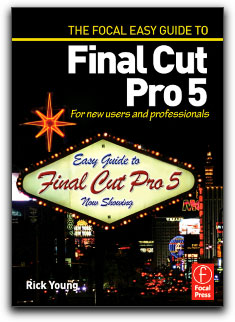 
There are not many books that surprise me as much as this one has. I find that most books aimed at the new or advanced editor have, certainly, their strengths and weaknesses but most all of them have something to offer. Sometimes, however, perhaps due to their complexity or organization, finding just what you need can be a chore in itself.

Rick Young's book, The Easy Guide to Final Cut Pro 5, is really aimed at the new user of Final Cut Pro. While the advanced editor may find several helpful hints and information that they long ago forgot and have now been reminded of, it is the new Final Cut Pro editor that will benefit the most.

In such a relatively short book as compared to the 800 page tomes I usually find, there is not much that Rick Young does not cover in order to get the new user up and running as soon and as painlessly as possible. Covering all the important and necessary information from the initial set up and understanding and use of the interface, he seamlessly segues on to methods for log and capturing, organizing the footage, usage of the more important editing tools, rendering and media management. Further chapters cover the use and application of transitions and filters, how to properly apply audio, outputting and the new multicam features. I do not mean for this to sound like a simple running off of the index features, as he reviews each of these application attributes beautifully.

What really sets this book apart from so many others is how, when covering one feature or another, Rick Young's step-by-step directions and graphics are so very easy to follow. There is nothing here that will leave the new user confused by either the terminology or provided steps that are an enigma to follow. The graphics are plentiful and large enough for even the oldest eyes to read. As an example, his explanation of the time remapping feature in FCP was the most clear and concise I have seen in any book. The writing style could even be called 'friendly'; his demeanor in prose is like having someone sitting next to you explaining each step enabling you to get into Final Cut Pro as quickly as possible.

There is no complimentary disc full of media by which one follows a tutorial task towards a projected end. The reader will need his or her own footage to capture and experiment with. Since most of the users of Final Cut Pro shoot video themselves, this is probably a good thing, as I often prefer to use my own footage clips anyway when working through a book.

It has been my experience that most brand new users are often stymied by their inability to add a transition to a clip that they've dragged down from the viewer. Rick Young gives excellent directions early in the book on the several ways to 'insert edit' clips into the timeline, however, Rick doesn't mention the need to create 15-30 frame handles for each clip until some 60 pages later when he covers Transitions and Effects in a later chapter. In addition, because the new user might very well be shooting with any one of the new HDV camcorders on the consumer market, I found the very brief section on working with HDV to be just that, barely touched, with no mention of or how to change to the proper sequence settings or adjusting settings between HDV and DV projects. Then again, you can't have it all.

The Easy Guide to Final Cut Pro 5 does not cover everything you will ever need to know or want to eventually use. That is not its purpose. For instance, he devotes much needed time to the essential editing tools, the pointer, arrow for selecting tracks, razorblade, magnifier and pentools. For the new user, these really are the most necessary tools to get one going. That he spends almost no time covering the roll and slip edit tools, the crop and edit selection tools is not a negative at this stage of the game. The purpose is truly to get the newbie up and running, with confidence in their game, rather than confusing them with every nuance and feature to be found in FCP 5.

Bottom line, there are so many editing books out there, I usually find myself simply going to the sections I am interested in or in need of. Though I am a fairly experienced user since version 1.0 hit our editing bays, The Focal Easy Guide to Final Cut Pro 5 is a book I read cover to cover and enjoyed tremendously. My friend, Gene, has already asked to borrow it and he's been editing for a while. That's a pretty darn good recommendation if I do say so myself.