Recording better audio became an issue when I recently brought the Canon 5D Mark II into my workflow. The audio recording capabilities of the 5D are limited -- a built in level limiter that drops the audio level when it peaks in an abrupt way, and 1/8" mic jack were the two largest setbacks. I had a project coming up and needed a solution and the Zoom H4n seemed to be an answer. After using the H4n for a short while it has quickly become not only an excellent double system audio recording solution, but has changed the way I shoot documentary stories.

I have been involved in some film projects in the past I am familiar with the audio and video of projects being recorded separately. After years of recording the audio of most projects directly into the camera I have become a bit lazy. As difficult as it may sound, recording audio separately is actually very easy. But it does require a shift in the way you shoot.

Please do not think of this as a comprehensive technical review, but rather sharing my experience incorporating the H4n into my work flow with the Canon 5D Mark II and Final Cut Pro. ATTACHING THE 5D MARK II AND ZOOM H4n
One issue is how to attach the two devices together. I'm still working on that one. I used a Manfrotto arm and camera plate. It looks a bit awkward but works. Two companies offering specific solutions for the Canon 5D are Zacuto (store.zacuto.com) and Cavision (ww.cavision.com). A benefit of these systems is the quick release plates. You can hand hold and then quickly snap everything onto a tripod. I hate messing around when I shoot and the easier it is to change setups the better. 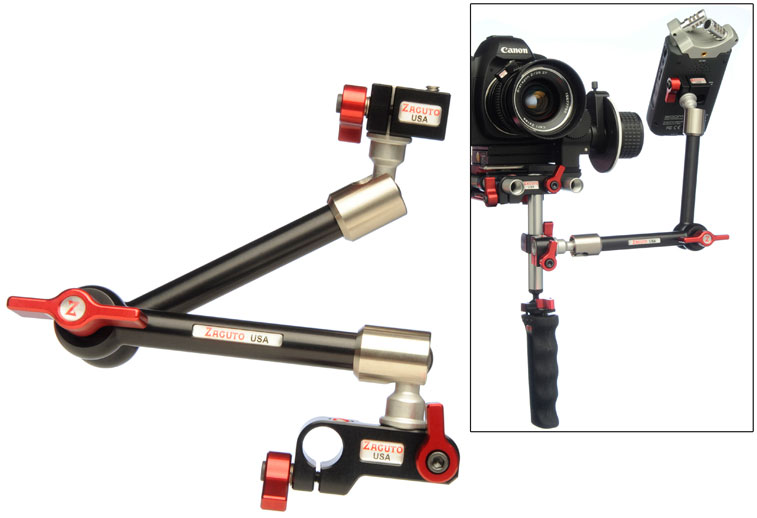 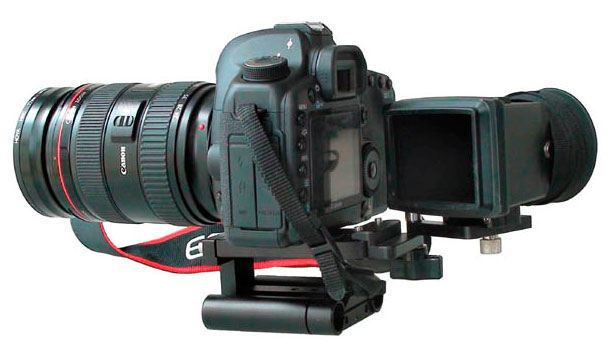 SETTING UP THE H4n
First I set up the H4n to record in my preferred format, 48 KHz 16 bit. I find the menu system very intuitive. You press the menu button on the right hand side then use the wheel above it to make a selection, and press the wheel to see the options for that selection. It is similar to many camera menus.

When the H4n is mounted on or near the camera reaching the controls is painless. I mount it so I can watch the levels and the viewfinder at the same time. I've used it with my wireless lav and shotgun mics.

I shot some documentary footage recently, alone, and used the wireless lav. It was an exterior shoot and I mic'ed the subject, and left the H4n and receiver on top of our vehicle while I followed the subject around. This left my hands free and I was able to concentrate just on the shooting. This is the point I made in the introduction, how it has changed the way I shoot documentary stories. Rather than relying on video footage, I record all the audio. I can put the camera down, change cards etc. and keep speaking to the subject. It seems to put the subject at ease when you can keep communicating without pointing a camera at them. And it frees up my thought process so I can ask better questions and keep the conversation going. I remember what they spoke about and plan on getting appropriate cutaways for the edit.

It has two XLR- 1/4 inch combo inputs so recording to both a mic and a wireless lav is easy. You can also record to two mics and the built-in mics for a total of four tracks. Documentation does mention that if you are pushing that much data around it's best to use a fast SD card as dropout can occur.

You can monitor the input levels with the input sound record level meters. They are large enough and legible enough for viewing at a distance. When shooting alone I've rigged up a setup with a manfrotto arm and clamps so the meters face me. I can watch the viewfinder and levels simultaneously. The 1/8" headphone jack is positioned well to enable monitoring audio. 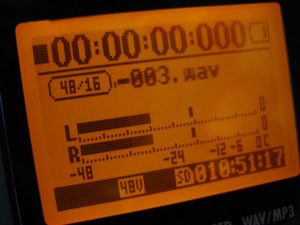 The H4n records to a standard SD card, which I think is brilliant. It comes with a 1GB card. I bought an 8GB card so there was no chance of running out of room. The specs say that an 8GB card will record for a little over 6 hours for WAV, 16 bit 48 kHz. You can record up to 24 bit 96 kHz and get almost 4 hours recording time. Other options are WAV 48 kHz and 44.1 kHz at either 16 or 24 bit and MP3 from 48 to 320 kbps. You can pop the SD card out and transfer the audio files that way, or plug in the whole unit into your computer with the USB 2.0 plug.

You can power the device via two AA batteries, the supplied AC adaptor, or USB when plugged into a computer.

It seems to be rugged, with a rubberized exterior that is very difficult to let slip from your fingers. The plastic case that is included protects it well and takes up very little space in your case. There is a 1/4" tripod mount on the back side.

The H4n is mind boggling in terms of the amount and diversity of features. I have just touched the surface in recording audio. It will normalize your audio for instance, tune your guitar, use it as a metronome and enjoy some Karaoke!

It has a phantom power option so all microphones will play nice with it.

FINAL CUT PRO
The footage from the Canon 5D is exactly 30 fps. A typical timeline is set to 29.97 fps. So the audio from the H4n will eventually go out of sync. I used to teach a Photoshop course and in the first class I always made the point that there are a dozen ways to do any one effect with that program. One way is not better or more correct than another. I don't know about a dozen ways of overcoming the audio issue in Final Cut Pro, but I'll offer two.

Method One
Slow down the audio in the timeline. Adjust it by selecting the audio clip in the timeline, hitting Command J, entering 99.9% and clicking "OK". Done. One downside to this is the pitch of the audio will be changed, but to me it is imperceptible.

Method Two
This method involves creating a timeline that is 30 fps to match the 5D footage. Drop the audio in the timeline and all will sync nicely. The process is explained wonderfully here by Bruce Sharpe brucesharpe.blogspot.com so I won't go into great depth. Bruce has also created an Easy Setup for you to download. To create your own you select an existing Easy Setup where the specs are close to what you need, modify it, and save it as a new custom Easy Setup. In my case the only modification was the change the time base from 29.97 to 30 fps.

I keep the Canon audio on the timeline and note where there is a visible spike and line up the Canon audio with the H4n audio. The trick is to have a visual and audible cue, a hand clap or clappers when starting your shot. I find it quite easy to sync audio without the use of a clapper board, but it is much faster with.

An alternative method to syncing audio is a product by Singular Software www.singularsoftware.com called PluralEyes. It is a standalone application that will sync your dual-system audio automatically. Audio must be recorded to the 5D and the better the quality the better the results. Putting a shotgun mic on it would be wise. Then in a FCP timeline add the 5D footage and audio, and the H4n audio to their own tracks. Launch PluralEyes and click "Sync" and it works its magic lining up the tracks in the timeline. It works even if you've stopped and started the camera. I did not believe it would, I tried it, it did. 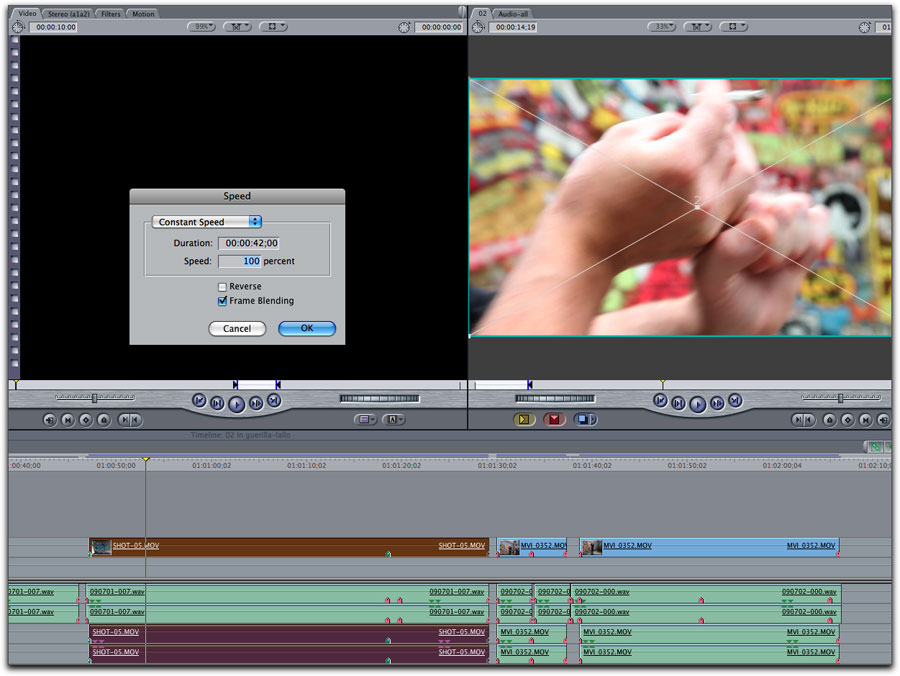 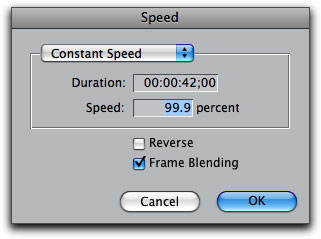 SUMMARY
I'm very pleased with the Zoom H4n. It's small, rugged and well thought out in terms of controls and menu system. The quality of the audio is excellent. It has changed the way I shoot and this is a good thing.

Picking up additional audio only is easy, turn it on and record sound effects, ambient noise, or dialogue for your project.

I've started to use it to record voiceover. It's much easier and quicker than recording onto the computer.

I think it would be a great addition to any kit. 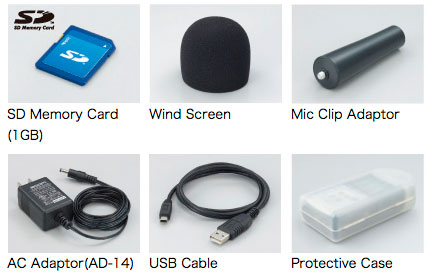 Graham Law and Associates is a forward-thinking media consultancy specializing in video, photography, and new media. Our track record features over 25 years of industry experience, including work for author Douglas Coupland, Harper Collins, Parks Canada, the Canadian Cardiovascular Society, the Public Health Agency of Canada and a series of PSA's featuring Daniel Alfredsson working with the Royal Ottawa Hospital to help de-stigmatize mental health. Our recent focus has shifted to include helping businesses use social media to increase their online presence. www.glaw.com