HDV is a tempting video format because it offers high quality video images at a fraction of the price of other HD solutions. However, creating the right HDV editing workflow for a particular project is a difficult task. As the creator of HDVxDV, a program which translates HDV video to many different HD and SD formats, I'll explore the advantages of using a non-native HDV editing workflow and show how HDV can be converted to Quicktime with HDVxDV and edited in Final Cut 4.5 HD and above.

A common misconception is that HDV is just a high definition version of the mini-DV format. However, the two formats are so different that about the only thing they have in common are the letters D and V. While DV or DVC Pro are very easy for the computer to edit, HDV in its native form is extremely difficult for the computer to handle. Many native HDV software and hardware based editing solutions claim to have better quality than non-native solutions. However, even a simple cut in a native HDV editing system will cause some kind of change to the video. This means that new video has to be generated which taxes your computer's CPU. More complicated things such as color correction, titles, and resizing video frames will cause all of the affected video to be re-generated. Therefore, in many situations, native HDV editing offers little or no advantage because so much new video needs to be created.

Another problem for native HDV is that HDV and DVD use the same video encoding scheme, and therefore have many of the same limitations. There are many types of scenes that HDV doesn't handle well. If you've ever watched a slow fade to black on a DVD, you may have noticed that the picture breaks up into squares. This happens because the video encoder has hit the limit on how much video it can compress. When this happens, it leaves ugly squares scattered all over the video frame. Editing in native HDV, forces these limitations on you. It will affect the quality of the effects and transitions that you put in your video.

Get it into I-Frames

To avoid these problems, the best thing to do is convert HDV into an I-Frame based video codec. There are several good choices for this, such as DVC Pro HD, the Apple Intermediate Codec, and Uncompressed 8 bit and 10 bit. Once the video is converted to one of these formats, editing becomes a lot easier. The computer doesn't have to work so hard decompressing the HDV video.

I-frame based codecs don't require re-rendering when a cut edit is made.
I-frame rendering is a lot less CPU intensive and many effects can be done in real-time and displayed on an external monitor. This means more streams of video can be combined on the screen in real-time.

The downside of converting video from HDV to another format is that it requires more hard drive space and it takes time to do the conversion. First the HDV video has to be captured to the computer and then converted to another codec. This conversion process can be very fast for codecs such as the Apple Intermediate Codec or Uncompressed HD, but DVC Pro HD will take much longer because the video must be re-sized to fit. While the HDV video file requires 14 gigabytes per hour of video, DVC Pro HD requires 4 times as much space for 1080i. Uncompressed HD requires as much as 500 gigabytes per hour. However, the cost of the extra hard drive space may be trivial compared to the amount of time and money you save in editing and post production.

Capturing and editing video with HDVxDV

Setting up a Sony HDV Camcorder or Tape Deck for capture

In the menu settings of your Sony HDV camcorder or tape deck make sure you have the followings settings:

Make sure that the setting A/V->DV OUT is set to ON. 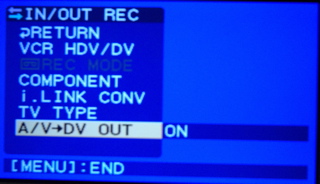 The device must be in HDV mode. Make sure that the VCR HDV/DV setting is set to HDV. 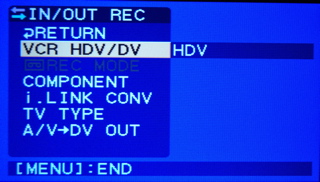 The i.Link CONV setting must be OFF. 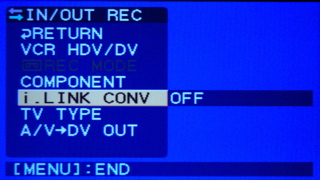 Capturing HDV from an HDV device

Start HDVxDV and you should see the following - 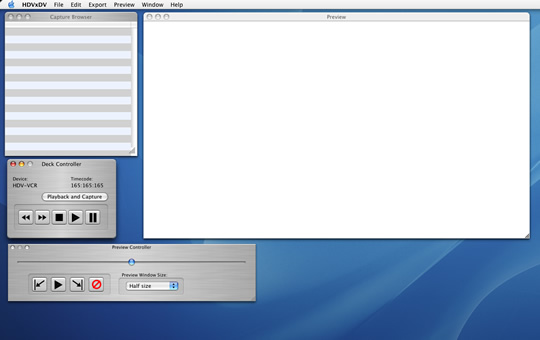 If your HDV device is connected, the Deck Controller window will look like the this.

You should see a device listed under the Device: text and the buttons for controlling the deck should be enabled. If you don't see this, try checking the connection between your computer and your HDV device.

Once you have found the location you want to capture, press the Playback and Capture button. You will see the following dialog appear.

Specify a name and folder to place the new capture file. Make sure that this disk drive has plenty of space to handle the capture file. You will need at least 14 gigabytes of space per hour of video.

If the HDV device is stopped, HDVxDV will start it. If you have the HDV device paused, you will need to press the pause button again to resume playback. The Playback and Capture button will change to read Stop Capture.

Press the Stop Capture button when you are ready to stop the capture process. The HDV file that you created should appear in the Capture Browser. 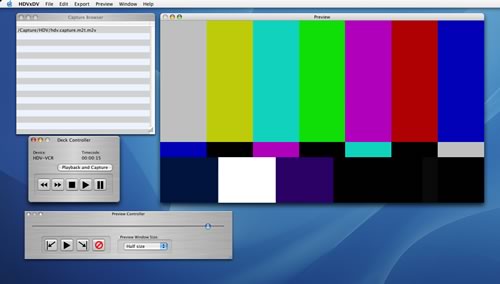 Once you have captured an HDV file you are ready to convert the video to a Quicktime movie. If the file you want to convert isn't already loaded in the Capture Browser, use the Open Capture File command from the menu.

Once you have loaded the file, you can use the Preview Controller to scrub through the timeline.

The first step in exporting video from HDV to Quicktime is to determine the frame size that you want to use. To do this open the HDVxDV preferences panel by selecting it from the menu.

The HDVxDV preferences panel will appear:

In the preferences panel, you can pick the output resolution under Frame Size.

Select the size of the video that best fits your needs. If you plan to export the video to the Apple Intermediate Codec, use the Leave as is option. If you want to export to DVC Pro HD, you must use the correct frame size for DVC Pro HD 1080i or 720p.

You may need to change the field ordering as well. Set the Field Dominance setting which best reflects your needs.

Once the preferences have been set, select one of the two export menu items. The first way to extract is Batch Encode Movies...

This option allows you to export all the movies in the Capture Browser. This is the best setting if you want to convert a great deal of HDV files into Quicktime movies. You can load the same HDV file into the Capture Browser multiple times and mark different in and out points for each copy. This way you can convert selected scenes into Quicktime movies.

After selecting this option, the Export panel will appear.

This is where you select the video compression codec to use in the Quicktime movie. Here's a brief explanation of the options.

DVC HD 720p60 - This setting is matched for video with only 720 lines of resolution using DVC Pro HD.

After selecting the codec, HDVxDV will ask you for a folder to save the files to.

This folder is where all of the Quicktime movies will be saved to. The names for the individual files will be the same as the names of the capture files. If there are any duplicate capture files in the Capture Browser, they will have a number appended to them.

After pressing the Export button, the progress panel will appear:

Once the conversion is complete, the progress panel will disappear and the Quicktime movie will be ready to use. You can press Cancel at any time during the conversion.

If you want to convert only one of the files that is in your Capture Browser, use the To Quicktime Movie... selection in the menu. It works the same as the Batch method, but it will only convert one file.

After converting the video, the next step is to bring it into Final Cut Pro by dragging it into the your Final Cut sequence. Make sure you have set the sequence settings to match the video format you are trying to import.

You will notice that there is an orange bar at the top of the sequence. This is because Final Cut imports the video with a distort setting of 33. Select the clip and press return to bring it up in the Viewer window.

In the Viewer window, click on the Motion tab.

Change the Aspect Ratio setting from 33.33 to zero.

The orange bar should disappear.

Working with HDV is very easy when you convert it to an I-Frame based codec. For monitoring HD, I use a Black Magic Design Decklink HD card combined with a Black Magic HDLink connected up to an Apple Cinema display. This solution will display video encoded at 1440x1080 resolution and output it at 1080i HD (1920x1080). If you have a Sony HDV camera, editing video at this resolution is ideal, because you don't have to re-size it during the conversion process. You can create a custom sequence in Final Cut Pro 4.5 HD and edit at 1440x1080, but see the video displayed at 1080i on an HD monitor. The Apple Intermediate Codec and 8 bit or 10 bit uncompressed both support the 1440x1080 resolution.

Brad Wright is the creator of the very similarly named DVDxDV and HDVxDV applications. Brad has been a featured speaker at LAFCPUG meetings four times and appears on the "HDV Night" Lafcpug on DVD. From time to time Brad also appears on the Inside Mac Radio Show.