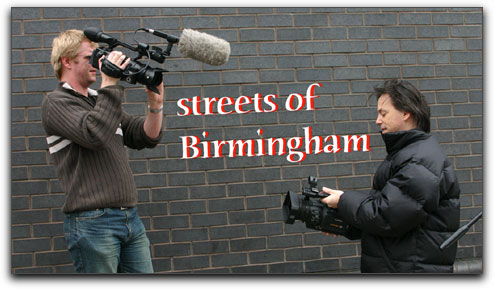 
This wasn't meant to be a shoot-out between 2 cameras or 2 formats, though this may come to be seen as the outcome of this piece. Hand-in-hand with the new Panasonic HVX-200, recording DVCPro HD straight to P2 card, with a Sony Z1 filming the action side-by-side in HDV.

Having shot with the HVX-200 for a couple of hours on the streets of Birmingham I've got to say the Panasonic HVX- 200 feels like any other camera I have ever used. It feels like a camera should, all the controls are in the right place, it feels good. I've heard reports that it's chunky, some people have said it's ugly and bulky - I don't have any of those problems at all. I like it! 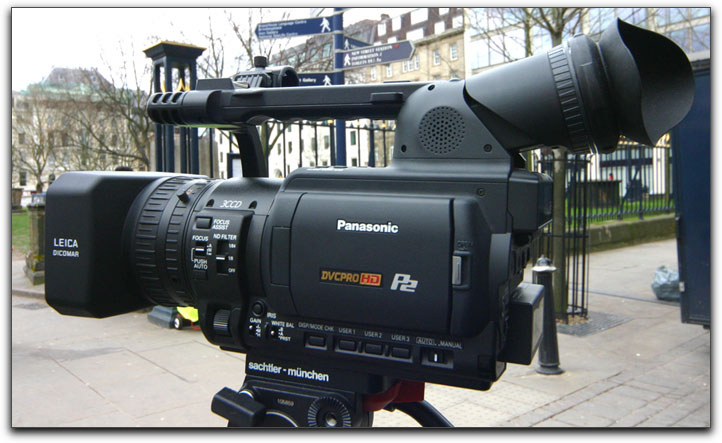 On other cameras, when shooting on HDV, at times, you can wait up to 8 or 10 seconds for the camera to go into record. With the HVX-200 to put the camera into record mode is instant. The moment the record button is pressed you are then recording. For a professional camera this is what you need. It can make the difference between getting and not getting a shot.

The zoom controls are nice and responsive - one can get a steady, subtle zoom, nice and controlled. On the base of the camera one can slot the lens into servo or manual. Good zoom controls. 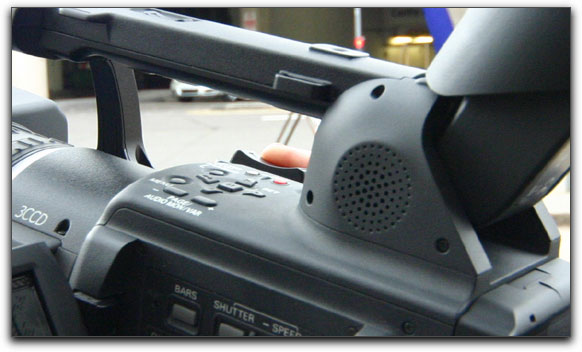 In some ways the camera is quite similar to the Sony Z1 - not a copy, but similar. On the top of the camera is a zoom control and record button, the zoom rocker is in the same position, one can switch between manual and servo zoom servo zoom, a good flip out screen, mic holder just where it should be - "one" feels very much at home with the camera. 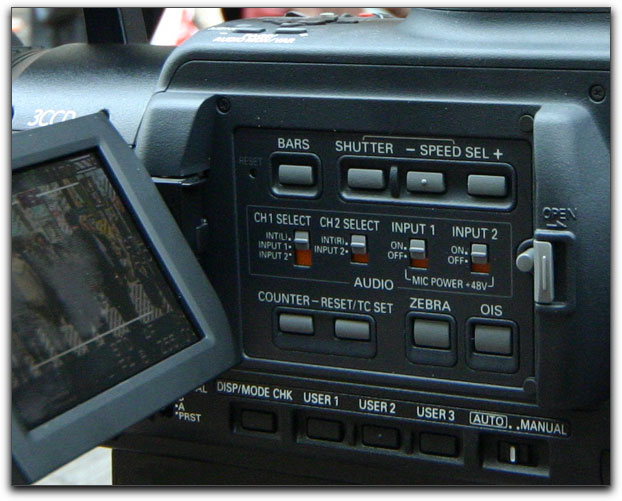 There have been reports that the screen resolution on the HVX-200 and the quality through the viewfinder is not up to scratch. I found it to be fine. Not a whole lot better or worse than other cameras in a similar class or price-range. 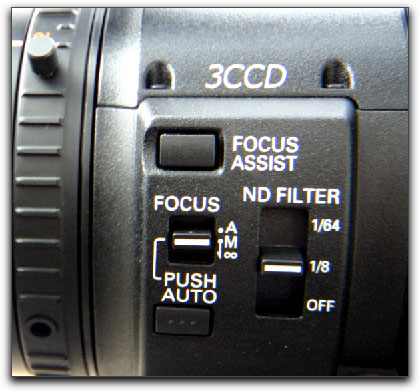 When shooting to P2 - as with tape, one can see in the viewfinder how much time is left on the P2 cards. The camera takes two P2 cards, which at present are available in either 4 or 8 gigabyte versions. You get 4 minutes of DVCPro HD on the 4 gig card or 8 minutes on the 8 gig card. With two 8 gigabyte P2 cards loaded into your HVX-200 you will get a total of 16 minutes of DVCPro HD shooting time.

Cards can be hot-swapped while recording, meaning if one of the cards fills up you can take the full-card out, continue recording on the card still in the camera, then copy the contents of the card you have removed to hard drive, wipe it, and put it back into the camera, enabling one to automatically record onto the empty card as soon as space is needed.

Ideally one would have 3 of the 8 gig cards to work with. P2 removable media will increase in capacity as time goes by. Expect 16 and 32 gig cards to appear sometime in the future (no predictions on when).

For "in the field production", Panasonic make a portable battery powered hard drive with a slot in the top for a P2 card. 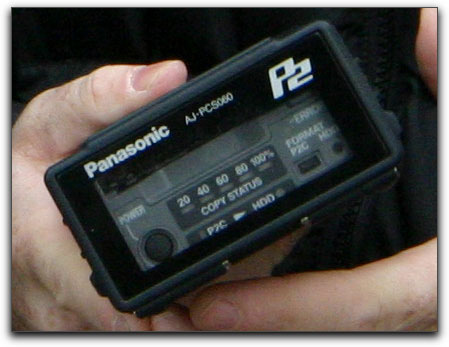 What this gives you is a way of shooting continuous. Once a P2 cards fills up, remove it from the camera, continue recording onto the P2 card still inside the camera, copy the data to the Panasonic hard drive, wipe it, and then put it back into the camera and continue working. Obviously one would need to repeat the procedure as each P2 fills up.

In our tests it took four minutes to copy 8 minutes worth of DVCPro HD data from P2 direct to hard drive. You will therefore never have a break in a live recording - providing you can keep up with the shooting and copying routine. Even with tape you need to change tapes every hour. The P2 media can be moved to your Final Cut Pro system very easily. When shooting DVCPro HD you are shooting with a frame-based codec which means the workflow in post-production is a lot easier than it is with HDV. Simply go direct to the Panasonic hard drive, or straight to you Macs hard drive via a USB P2 card reader (also made by Panasonic) or use the P2 cards which fit directly into a PCMCIA slot found on the 15 and 17 Apple G4 Powerbooks.

Importing P2 Footage into Final Cut Pro
Importing files into Final Cut Pro from P2 is easier to achieve than capturing from tape. Simply install the P2 driver provided by Panasonic and the P2 device will mount on the desktop like any removable media volume. The driver from Panasonic is available on CD or by download. To import the media select File - Import - Panasonic P2. This copies the media from the P2 card into your Capture Scratch folder and places a QuickTime wrapper around it to edit in Final Cut Pro. Sounds slightly complicated? be aware the above happens automatically once you invoke the File - Import Panasonic P2 command. 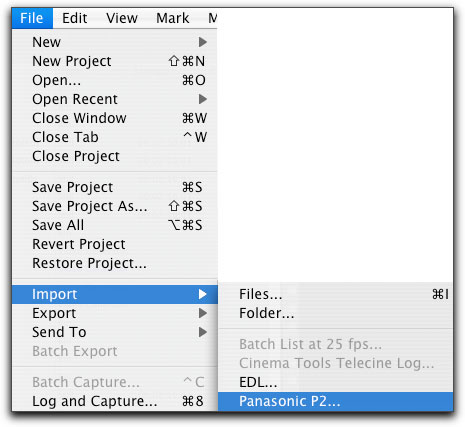 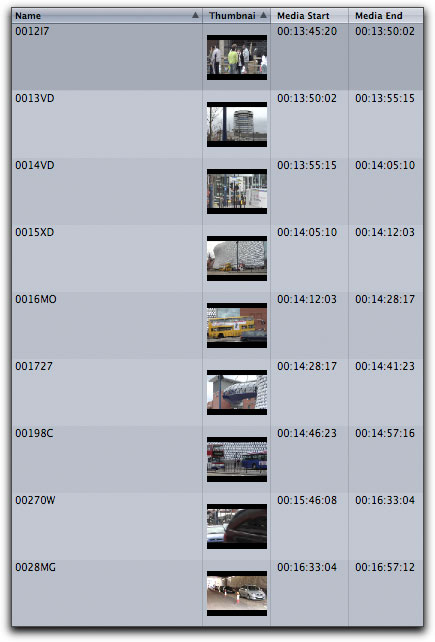 COMMENTS - WHAT Z1 USERS SHOULD KNOW ABOUT THE HVX200 (Thanks to Matt Davis www.mdma.tv)

True progressive scan
No CineFrame or resolution halving modes in the HVX. You can shoot 1080p25 and 720p50 for better playback on non-interlaced displays (e.g. LCD, plasma), and if you want to shoot tape, the DV mode can also be progressive (and 16:9 of course)

Subjectively nicer film-like gamma
Without wishing to provoke argument, the HVX continues and extends the DVX100's strengths in image tweakability and stretched latitude

Flexible frame rates
Shooting 50p and playing back as 25p for slo-mo or 'overcrank' shots that are way beyond the interpolated shots from Twixtor and the like. Similarly, timelapse and undercrank (speeded up) shots are economical to shoot as 12.5fps uses half the space of 25pfs material. You can also dub these P2 shots in- camera onto DV tape to keep a DV workflow.

Higher colour resolution in P2 formats
DVCPro50 (SD) and DVCProHD (HD) use 4:2:2 colour recording, unlike HDV (4:2:0) - bottom line is that colour resolution is much better for chromakey and where strong colours are part of the scene (e.g. pop concerts, stage acts).

Rolling start record modes (Pre-Rec)
P2 media allows you to keep the camera rolling and recording - automatically discarding anything older than 3 or 7 seconds (depending on mode) until you hit the record button. Imagine wildlife filming - watch for behaviour with this mode, and as soon as it starts happening, dab the button. The last 3 seconds are already in the can!

Sceptical about the limitation of 8 minutes of HD shooting per P2 card? Loop record with 3 P2 cards - an assistant copies and clears a card whilst the camera records onto one card with another standing by when its full (though a weighty tripod would seem a wise investment)

Scene files & metadata
The HVX has an SD slot that opens up two interesting opportunities - firstly, scene files can be stored and retrieved. Matching a couple of cameras as tweakable as the HVX is much easier than Z1s with custom Picture Profiles. Secondly, the SD card can store metadata about the clips shot on P2 - similar to the info stored on DV regarding exposure, time, etc. but extending it to location, crew details, notes and so on. At time of writing, metadata integration isn't quite there with Macs and FCP, but it would seem logical to update CinemaTools to integrate this info with the clips used in a given production... 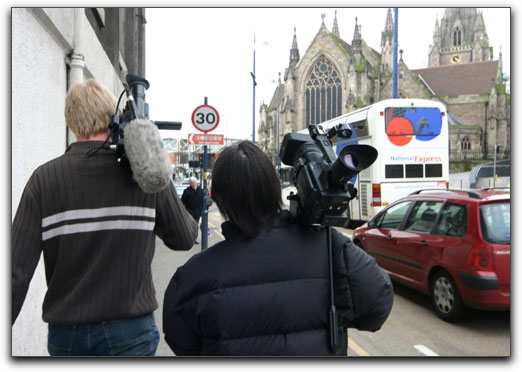 CONCLUSIONS
For a camera announced in April - a year ago - to only appear now - seems quite a wait. Though I suspect it is because Panasonic have been working hard to get the camera right. This is a make or break camera for Panasonic. The emphasis in the market, for many levels of production, has shifted away from big cameras. When you get small cameras, such as the HVX-200 which produce excellent results, the question needs to be asked does one need a big camera to shoot with.

The HVX-200 is revolutionary in that it shoots onto solid state media - known as P2. The camera will shoot in several formats including DVCPro HD, DVCPro 50, DV. If recording DV only one can record direct to tape - I stress only for DV. The other formats can only be recorded to P2 cards or, imminently, direct to hard drive. Each of the 8 gig P2 cards cost Ł930 each ex-vat.

This cameras sets a whole new direction for acquisition because one does not need to record to tape anymore. Some people have made a bit of noise about the fact that you can only store 8 minutes of DVCPro HD material on each of the 8 gigabyte P2 cards, though I'm convinced the P2 workflow described is workable.

People shout that they cannot work in 8 minute chunks, sounds like complaining and short-sightedness to me - back in the days of 16mm film one would get between 10.5 and 11 minutes to 400 feet of film, and excellent films were made. People have gotten lazy with tape. Perhaps shooting onto P2 will bring some discipline back into the filmmaking process.

I like the idea of P2. As time goes by it will get cheaper and the cards will get bigger. Expect 16 and 32 gig cards to appear in the future.

Tape is on a limited life. Solid state recording is the future and future is now, of course, at a price.

Rick Young is a Producer/Director based in the UK. He writes, shoots, and edits for clients both in the UK and internationally. Rick is the founding member of the UK Final Cut User Group and is the author of the Easy Guide to Final Cut Pro, published by Focal Press. He is also the editor for MacVideo magazine which can be ordered as a printed magazine with DVD or electronically in PDF format http://www.macvideo.co.uk