Few settings are more physically demanding than the vast, untamed wilderness of Alaska's Iditarod Trail. Despite these trying conditions, producers of the "Last Great Race on Earth" are challenged to capture the Iditarod on video and make that video readily available to media, schools, web site creators, and other audiences.

By switching to all digital acquisition, the whole process has been streamlined. The digital equipment is able to withstand the intense climate and weather demands, while delivering pristine video. Archiving and sharing the video is streamlined with Mac Digital Clip Library and HD Log from Imagine Products.

Panasonic P2 cameras have proven rigorous enough to withstand the event's difficult weather conditions, including sub-zero temperatures and winds that can cause a complete loss of visibility. After all the action on the course has been captured by the cameras, the digital cards holding up to 32 GB of High Definition video from each camera are removed and inserted into Apple MacBook Pro notebooks equipped with Imagine Products' Mac Digital Clip Library and HD Log, as well as external dual 500 GB hard disks. The software archives two copies of the video in its original format, while creating a QuickTime version of each clip. All video is logged and indexed for easy access.

Iditarod Director of Public Relations Chas St. George described the process. "The digital acquisition, archiving and indexing allows us to make the video available right away, in an easy-to-find database." The five seats of Final Cut Pro Studio can all access the media as original P2 clips or as pre-converted QuickTime proxies or full resolution MOV files.

Extra equipment is hard to come by in the remote Alaskan territory while the race is in progress. By quickly archiving the video, producers are able to re-use the cards in the P2 cameras to capture all the action.

As a complement to the Panasonic P2 cameras, Mac Digital Clip Library provide the digital library solution that allows the Iditarod video professionals to setup web-based sharing of logs, thumbnails, and video clips. .

The digital acquisition process allows producers to capture and archive High Definition video in the field, from various locations simultaneously. Since the video is indexed when it is archived, the database provides ready access to any video clip.

Over the estimated 10 to 17 days and 1,150 miles of the race, more than 13 TB of video is generated. With the digital acquisition process, this video becomes part of the Iditarod database while the event is still in progress. It enables Iditarod fans worldwide to track a certain musher, or view a particular segment of the race shortly after it has occurred. 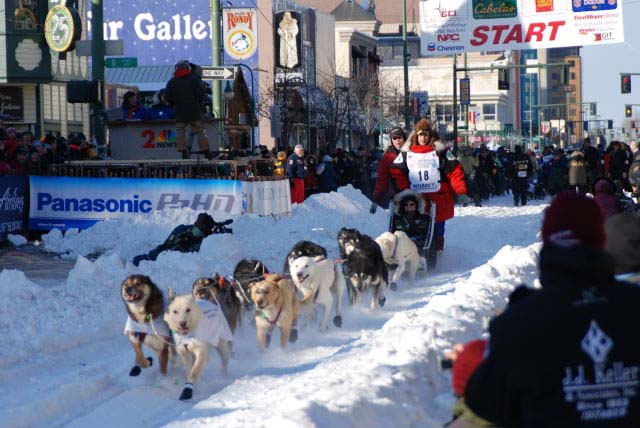 The Iditarod Trail Sled Dog Race first ran from Anchorage, in south central Alaska, to Nome, on the western Bering Sea coast, in 1973, after two short races on part of the Iditarod Trail in 1967 and 1969. The Iditarod Trail, now a National Historic Trail, had its beginnings as a mail and supply route from the coastal towns of Seward and Knik to the interior mining camps at Flat, Ophir, Ruby and beyond to the west coast communities of Unalakleet, Elim, Golovin, White Mountain and Nome. Mail and supplies went in, and gold came out - all via dog sled.

The modern Iditarod is a commemoration of a not-so-distant past that Alaskans honor with pride, and the race route encompasses both large metropolitan areas and small native villages.

When the last musher has crossed the finish line, all the video is safely archived and indexed allowing event organizers to immediately begin editing the video in Final Cut to create documentaries or other specialized products with the video material.

"We don't have to spend hours scanning through footage to find a certain shot. With the digital process, it's easy to find exactly what we need and storyboard with QuickTime clips or access the original footage," explained St. George.

How much time did it save the Iditarod videographers? Switching from tape based acquisition to direct to disk in 2007 shaved six months off the editing cycle. And by completing editing at the end of May, DVDs were available in time for the Alaska tourist season, greatly increasing sales. Previously DVDs weren't completed until after the close of tourist season in September, causing them to only be available for purchase via the web.

St. George summed up the experience of the Iditarod video professionals. "We can't imagine doing things 'the old-fashioned way' when we know how much easier it is with digital acquisition, archiving and indexing."