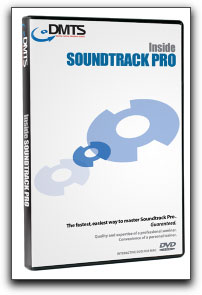 
There are a number of books and tutorials out for Soundtrack Pro and DTMS has its own as well. Consisting of 5 hours of video based instruction divided into 25 lessons, the DTMS is certainly a disc worth considering for the beginner or advanced user.

Narrated and taught by Jem Schofield, the user is lead through an extensive building of a very interesting project entitled "The Box". Mr. Scholfield, with humor and a comfortable speaking style, takes the user step by step through this video project, which comes off as a very scary trailer for a movie. With each step the user is guided through the use of a great many features and capabilities that many Soundtrack Pro users might not even be aware of.

Every transition to a deeper level and understanding of Soundtrack Pro is logical and fits in the workflow. Many tasks are repetitive which creates a second nature to what you might be doing. This certainly works better than a snapshot approach where you may be asked to do something once and by the time you get to the end of the disc you've forgotten how to do what you had already done 5 lessons back.

Beginning with the basic introduction to audio fundamentals such as audio waveforms, beats vs timecode, preferences and the standard Soundtrack Pro layout, Jem prepares you properly to build this unique trailer. 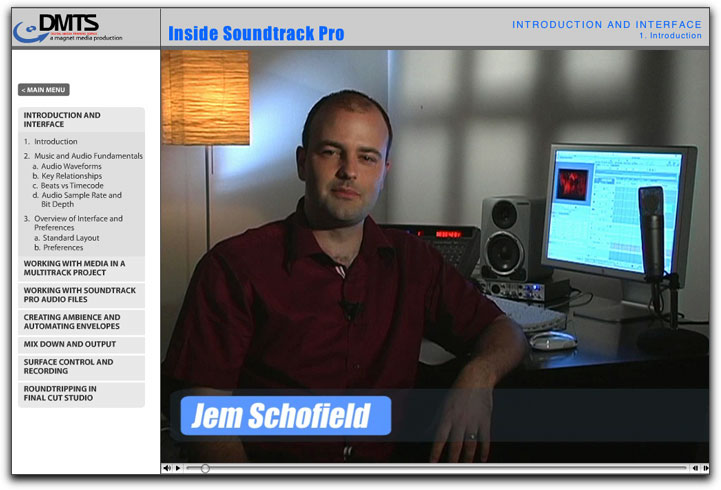 In the second section the student learns how to properly set up their initial multitrack project, creating both background and ambience while learning how to search for and apply Foley effects. Many of these effects are adjusted, trimmed and highlighted in later chapters as your knowledge and skills increase. 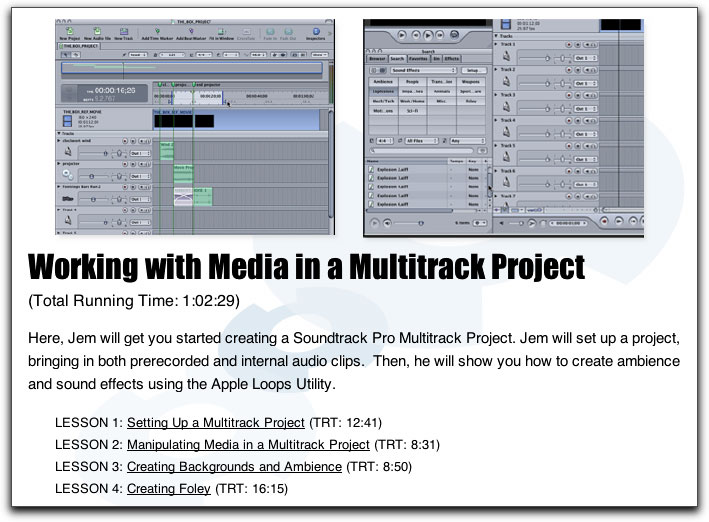 Thorough instruction on removing noise with noise print and creating composite audio clips is not all. Have a pop or hiss in your audio files? You'll learn how to remove them while adding natural ambience to fill the gaps. Section 3 also nicely covers applying and using audio Process effects and an excellent lesson on beneficial and practical methods while using the audio waveform monitor.

It is in this section that we find a problem, one that is not insurmountable but never the less, should have been fixed. While working with the 4th segment of this lesson, that which covers the application of Process Effects to a voice, you are instructed to apply the Vocal Transformer from the Process Menu of Soundtrack Pro. Herein lies the problem. Soundtrack Pro 1.0 had the Vocal Transformer while Soundtrack Pro 1.0.2 does not. DTMS, when producing this tutorial, used a pre-release version of the software. Thus, the effect used within the project cannot be applied as directed. I simply used a similar effect as my own work around. My thoughts are that they should have waited for the final version to hit the market so as to avoid problems for those purchasing the Inside Soundtrack Pro disc. 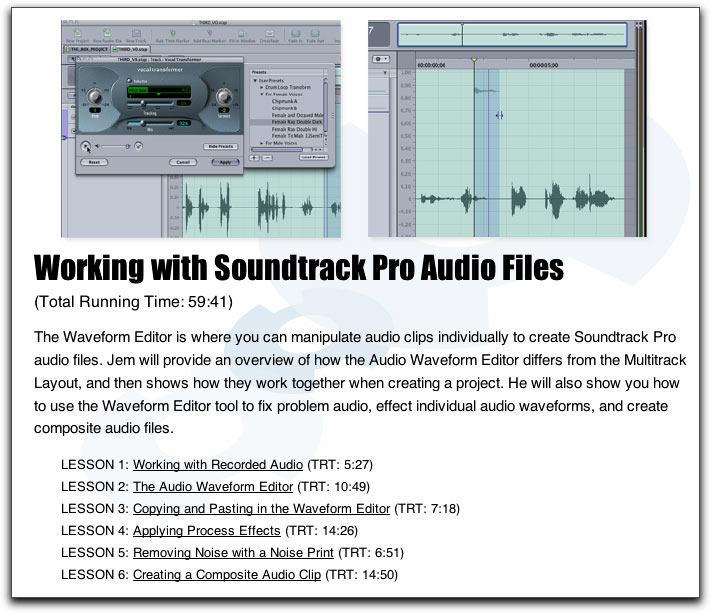 Chapter 4, divided into four lessons, runs 52 minutes and teaches you the ins and outs of adding sound effects and adding music. A tremendously beneficial lesson on automation in a multitrack project follows. Creating automated key frames in real time is one of the many strengths in Soundtrack Pro and yet many editors I have met have not even been aware of this possibility. 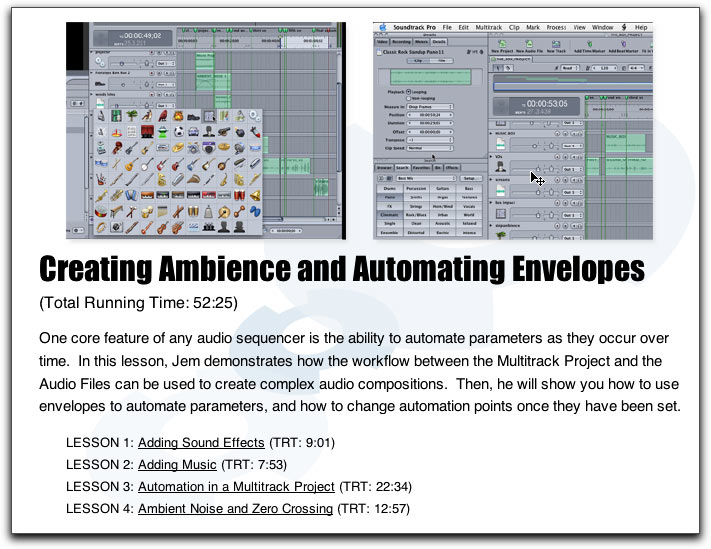 Your project is almost done by this point and it is impressive. While it has been typically time consuming, seeing it all come together has been fun. However, you work isn't done as chapters 5, 6 and 7 demonstrates how fine tune your project utilizing the Soundtrack Pro mixer while creating busses, sends and voice overs, as well as exploring the export options open to you. To finish up this tutorial disc the last chapter covers roundtripping between Soundtrack Pro and Motion and Final Cut Pro 5. 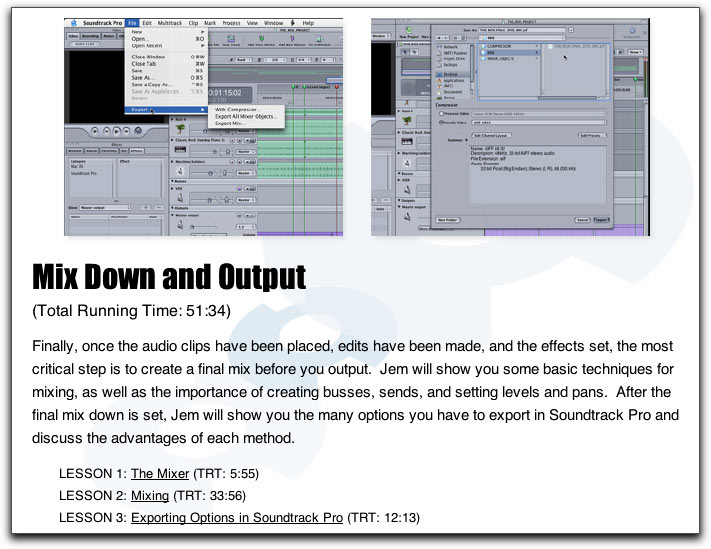 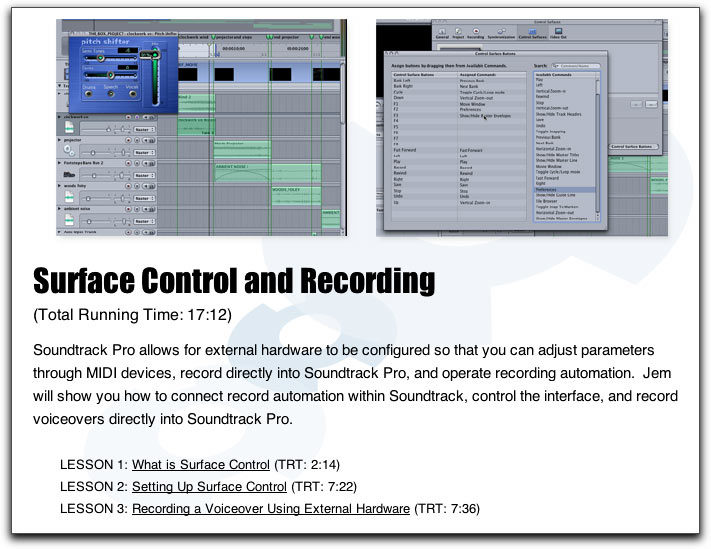 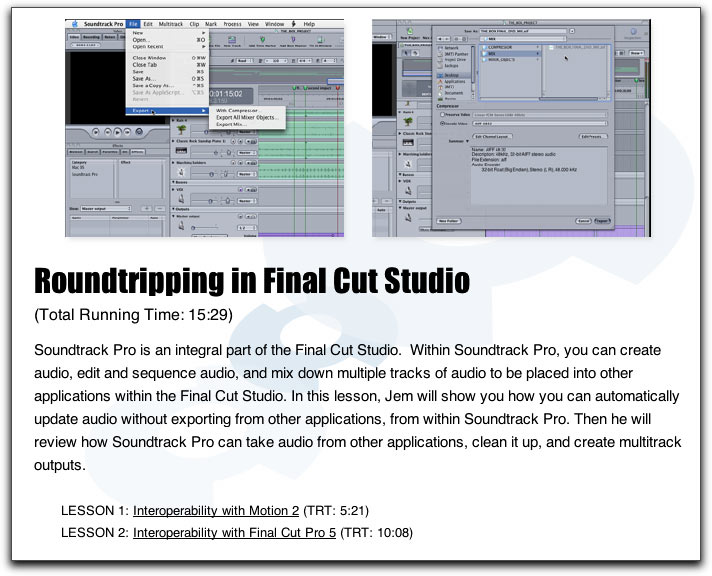 While this disc, like most tutorials, is certainly self-pacing, be prepared to spend plenty of time with it. There is much to accomplish and do while working with the DTMS tutorial and interruptions can throw your concentration off. I found that while working with the disc, switching between the tutorial and my own Soundtrack Pro project necessitated my having to repeat several tasks over again. For example, if you highlighted a portion of your waveform after measuring out a specific section, and then switched to the tutorial to receive the next instruction when going back to your own project, you would then have to repeat the measure and highlight. This slowed my workflow tremendously and was a real pain. The positive side is that repetition makes for mastery.

The bottom line is that Soundtrack Pro is a more complex and powerful application than many realize. Sure, it is lots of fun to simply bring over loops and create your copyright free songs but it is capable of so much more than that. It would be a shame not to be able to utilize all that it has to offer. Aside from that one major problem in utilizing the vocal transformer, I really think that the DTMS disc for Soundtrack Pro is a great tutorial. It brings to you a wonderful project for you to build while enhancing your knowledge and abilities to work with a very capable application. Jem Schofield and DTMS utilize most of what Soundtrack Pro can do. If you work through the tutorial you will come out a much more capable editor and user of this great application. Do I recommend the DTMS 'Inside Soundtrack Pro? Absolutely!

DTMS Inside Soundtrack Pro is available for $84.15 at the lafcpug store.