It's Alive! How to Make Cut-Out Animations in FCP. 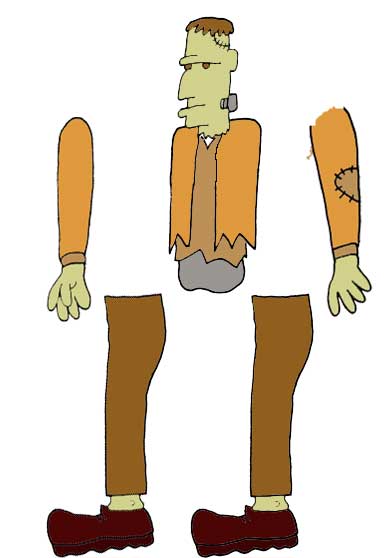 When I was little, I had a felt board. It was basically a board made of felt that came with a set of felt cut-outs in the shape of animals. You could make the animals stick to the felt stage and drag them around to create your own little performances. It wasn't sophisticated, but it gave me hours of fun.

I haven't seen a felt board for years now, but just recently while I was making a short animation using a photoshop file it occurred to me that I was still using the felt board method - only these days it's called 'cut-out' animation.

This tutorial outlines a simple way of making cut-out animations similar to the style used in programs such as 'Monty Python's Flying Circus', 'Angela Anaconda' and 'South Park' with FCP. This is an intermediate level tutorial, and a basic working knowledge of Photoshop and FCP is required.

The first thing you need to do is to make your character. For this example my good friend Shaun Salmon sketched a Frankenstein's monster for me, which I scanned into photoshop and coloured.

I chose to use the Franky character for two reasons:1. It's kind of amusing to demonstrate animation using the original (re)animated object and 2. Franky lurches, and that means his walk cycle is a lot easier to follow than something with working knees, ankles, elbows and so on.

If you want to work with the example character you can download it HERE, but as always, feel free to use your own material to work with if you prefer.

You can see that in the Photoshop document below each part of Franky has been put onto a separate layer, and that each part has a transparent background. Both of these steps are critical for using them as puppet parts in FCP, so keep that in mind if you are designing your own character. 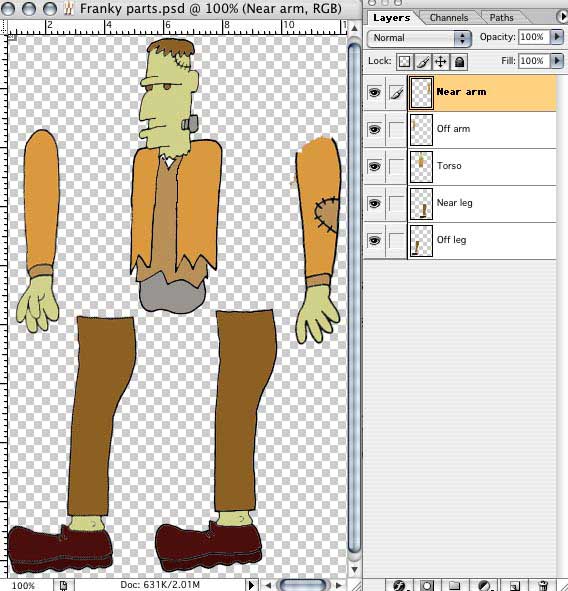 It also helps if you name your layers in a way that will let you easily identify them in FCP. For example, I have the layers "Near Arm" "Torso", "Off Arm", "Near Leg" and "Off Leg". (The 'near' and 'off' thing is my own quirk - you can call them "Left" and "Right" or "Wibbly" and "Potook" if you want, as long as it makes sense to you what things are when you need to know.)

While you're still in Photoshop, use the move tool (or Edit > Free Transform) on each of the layers to assemble your character and test that all the bits fit together correctly. 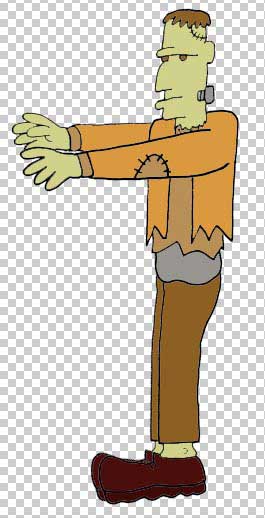 Now we're ready to jump over to FCP and get started on the fun stuff.

To get there, save the document as a Photoshop file - being careful not to merge or flatten the layers. Then open FCP and select File > Import > Files > and select the file from the popup menu.

Double click the franky file in the browser and you will see that in FCP the photoshop document is magically transformed into a layered sequence. 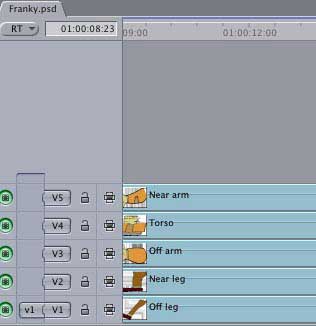 This means that each layer of the character can be manipulated separately, allowing you to move single parts like legs and arms without affecting the rest of the image.

Due to the wonders of modern technology all we need to do to make our characters move is use the rotate, scale and positioning tools on the layers to move the parts to their extremes, and then use key frames to tell FCP when the parts should arrive at those positions. All the hard work of 'tweening' (drawing the positions that occur in between those extremes) is handled by FCP.

That might sound a little confusing, but it's really quite simple once you get started. To demonstrate let's just do something easy like getting Franky to travel across the screen.

In any animation the simplest way to begin is to decide on your extremes - the points of extreme motion. In this very basic walk cycle there are three of these -

1. The near leg at the most extended forward position like this 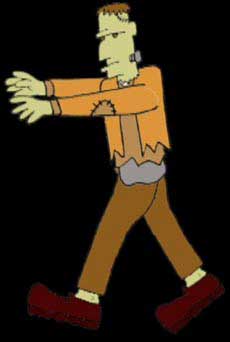 2. The off leg at the most extended forward position like this 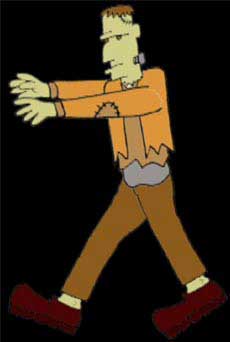 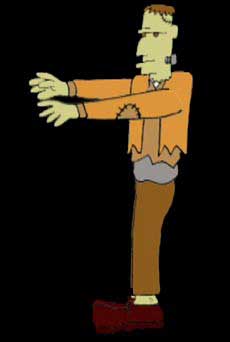 Don't forget that you also need to animate the upper parts of your walker - here Franky's torso and head lurches forward and backwards and his arms move slightly to reflect this lurching.

So how do we make these extremes? With care and patience and the wireframe function, of course.

Before we get into that, to reduce confusion, at this point it would be a good idea to close all your open timelines and make a brand new timeline. Call this timeline 'WALK THROUGH' and double click it in the browser to open it.

Now put a copy of the franky.psd (or your own character's .psd) on the WALK THROUGH timeline and double click it on the timeline to open the layers.

Using the blade tool, or control-v, make a series of inline cuts across all tracks of the .psd, until you have three sets of parts like this. 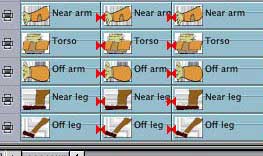 Don't worry too much about how long or evenly spaced the sections are - we will be adjusting these later.

Once you have done this each of the sections in each layer is a separate entity that can be manipulated independently of all of the others - that is, if you move one version of the torso, it will no longer affect the other torsos in the same timeline.

So, let's make the three extremes.

In your canvas, turn on Image and Wireframe 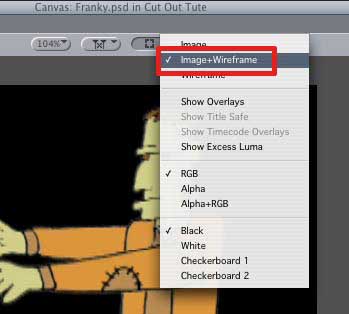 Choose the body part you want to move by selecting it in the timeline. 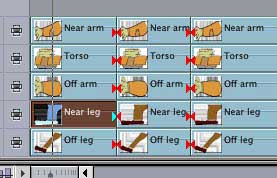 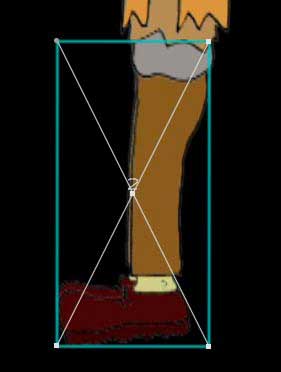 Now using the arrow tool in the canvas, you can shift and rotate the parts to where you want them to be. To move a part, click and drag anywhere inside the blue bounding box. To rotate, move the arrow tool over a corner of the box until you see a rounded arrow, then click and drag left or right. 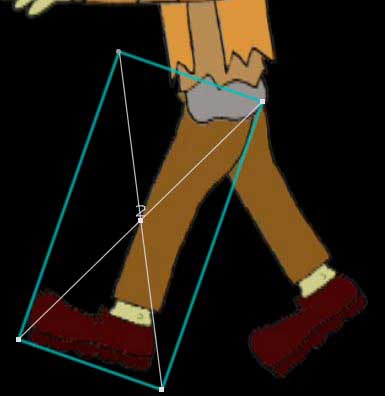 If you want more precise movements, you can use the motion tab controls for each part of the animation - just be sure to double click what you want to adjust on the timeline first to load the correct version into the viewer. 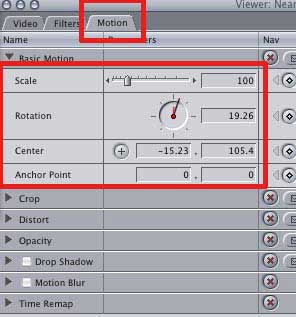 If you need to do any foreshortening, use the scale and perspective tools - it's quite amazing what you can fudge in this mode with a bit of motion quick trickery.

So, go ahead and make your three extremes - remembering that each group of vertical layers in the timeline is a separate version of your character in a different state of movement.

Now that you have the three extremes, you need to repeat them so that you can do a test of your character walking on the spot to see how it looks.

This is easy enough. First reduce the length of all your sections to about four frames and butt them up against each other. If you were doing faster movements you might work in two frame units, or even single frames. Slower movements use more frames or more pictures.

Use the arrow tool to lasso all of the layers and copy them, then put your playhead at the end of the group and paste. And paste again, and again and again, until you have a reasonable set of repeats of your extremes.

Now go back to the head of the timeline and play this down to see how it looks.

Terrible, right? Well, what did you expect? You've only been in the animation business for twenty minutes. Geez!

So now we want to make a few more stages to go in between the big extremes to smooth off the movement a little. These are called (wait for it) in-betweens.

So let's take a copy of the first state (in my example this is the near leg fully extended) and adjust the legs, arms and torso so that they are about halfway between the fully extended position and the fully closed position. 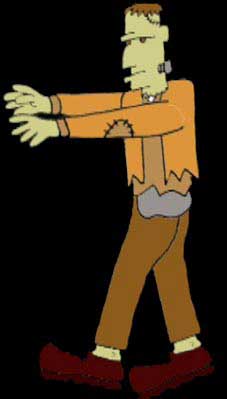 Insert this new state between the first and second states, so your timeline goes : near leg fully extended, near leg half extended, feet together. Then make another one of these for the off leg so you have an in-between for both legs.

Play the timeline to check that everything is in the correct order and functioning the way you want it to. Add more in-betweens for smoother movement, or experiment with extending and/or shortening the number of frames for the different states.

Once you have your character walking nicely on the spot, its time to make them walk around inside his or her own world.

In Photoshop, make yourself a background. Here I've got a nice bit of castle wall and floor from Shaun, but you could import a photograph or a scanned image or even work over the top of video. Its up to you. 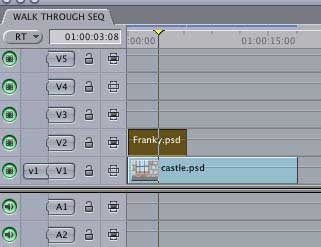 You should be able to see something like this in the canvas. 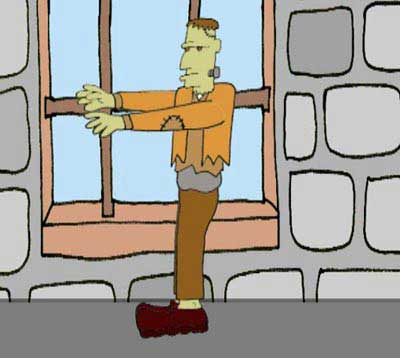 Now to make your character travel from one side of the screen to the other, we just need to set a couple of key frames.

First, put your playhead at the beginning of the clip and select the franky.jpg in the timeline with a single click. Then in the canvas drag the whole thing to the extreme right of frame so that the entire character is off screen. Mark a key frame by hitting the add motion key frame button, or pressing control-k. You should see the cross in the bounding box turn green to tell confirm that your key frame has been set.

Then put your playhead further down the timeline and drag the franky layer to the extreme left of screen, so that he is entirely off screen, and add a key frame.

You should be able to see the motion path you have created in the canvas, like this.

And now, with a little rendering, your character should walk right across the screen. 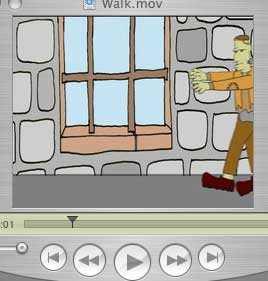 And that's pretty much all there is to it.

Of course you can apply the same principles to any movements that you need your characters to make - just remember that the parts of the character are moved in their own layered sequence, and the whole character in is moved in the canvas.

I hope this tutorial comes in handy - and gives you as much fun as my felt board circus did all those years ago.

By the way, the Franky character and castle background are copyright©Shaun Salmon. You can check out some of Shaun's weekly strip, "All Our Yesterdays." HERE.

Jude Cotter lives and works in Australia as a freelance broadcast editor, FCP trainer and trouble-shooter. [Top]
This article first appeared on lafcpug and is reprinted here with permission.