Keylight™ is a powerful plug-in from UK's The Foundry, (maker of the high-end Nuke compositer/VFX program). Keylight is used on chromakey shots in virtually any major feature film you can think of. It comes from a product developed specifically for motion picture chromakey work, normally bluescreen production.

If you're wondering what the difference between bluescreen and greenscreen might be, well, let’s see. Different colors? True; and blue is better for blonde characters, green for everybody else. Originally, blue-filtered imagery was motion picture in-camera special effects. In the 1930’s Technicolor’s London lab came up with the blue screen process which better suited color film. (It’s always from the UK, isn’t it? Except Technicolor itself was invented in Boston by refugees from MIT.) It was an arduous workflow from shooting against blue, controlling spill, pulling male and female traveling mattes… a headache. Today, for digital film and video, greenscreen is enormously popular, because the green channel in video carries most all the luminance information needed to isolate a key background from a foreground subject.

Today, whole feature films like 300 and SIN CITY are greenscreen productions, unless everybody’s blonde. Why are we seeing so many green shoots? Is the economy really improving?

Live-on-webpage production is becoming extremely popular. You often see spokespeople walking out of nowhere onto a browser web page when you load it, to say hello, deliver a mission statement or company overview. It's a little spooky to see leprechaun-like folks talking to you or to each other, but, when done right, message transcends media, and it's compelling. You see instructors standing next to bullet-point examples of their topic or product, often interacting with it-- often only when you click your mouse to direct the presentation. It's a whole new “humanizing” media initiative which doesn't challenge bandwidth the way full size videos do. But it requires careful planning, shooting, and good tools in post.

Cyclone Interactive of Boston, working with Moving Media of Arlington, MA, used greenscreen for a multinational corporate client specifically to bring live action and virtual sets together on the web, along with stand-ups to be composited against web page white backgrounds, all ending up as Flash elements. The experience and workflow was typical and today many editors get involved in these shoots.

Moving Media's A.J. Dimaculangan directed the green stage elements and I was hired to pull keys in two venues. The first was live on stage, allowing the director and client to check HD greenscreen alignment with the intended virtual sets for each scene. We captured each take through a Sony Z1 camera’s FireWire output, directly to a 13” MacBook (back when it had a FireWire port) right into QuickTime recordings, and from there imported into After Effects CS3 —which unlike FCP actually ran on a MacBook! With the wrong keying tool, this could be a fairly high pressure job.

The second venue was in post, refining keys, troubleshooting unwanted shadows, and with the wrong tool, you may not have all the bells and whistles you need for special situations.

The Foundry's Keylight™ excelled in both venues. It's hard to believe you can sit right on a stage and get a workable key with but one mouse click. That's often the case with Keylight™, because very good default edge spill suppression is incorporated. This is why the product has been used on major feature work. 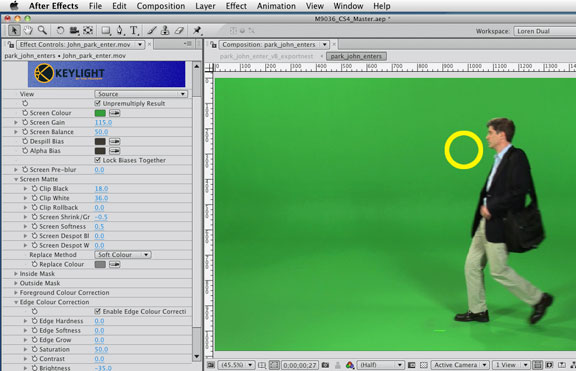 A greenscreen shot ready to key. The eyedropper click will be made inside the
yellow area. 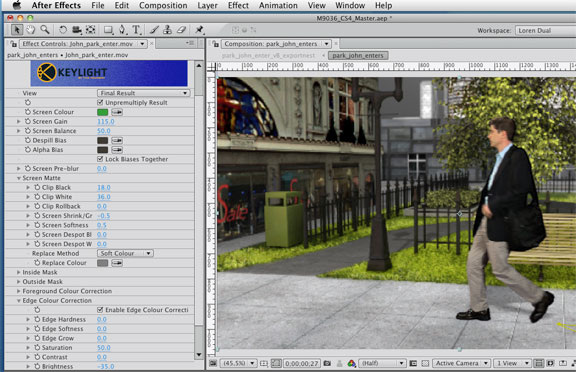 Keylight also has a gift for tracking reflections (car windows, for example) and tackling hair- the toughest keying problems. Often you can confidently utilize the shadows cast on the green stage floor in your final composite! Sample the source green near the subject and poof, you get exactly what you want, with no erosion of the subject and all the background completely knocked out, as was I by its ease of use live on stage. You can use matte sliders to refine the knockout if the background was unevenly lit.

Nevertheless, this is a heavy-duty post tool with a raft of controls for refining less than stellar keys. Keylight packs together functions often available as separate filters in other product lines. There are convenient  controls for tweaking foreground subject, background, and edge, from fine spill suppression to gain, softness, color quality and correction, all grouped into sections on one powerful pane.

Keylight even gives you the ability to crop the edge of the frame and replace it with a custom color to eliminate stage apparatus you’d normally garbage-matte out. It allows you to load special foreground and background masks, so you can apply one pass for each to troubleshoot areas you cannot tackle with one application of the filter. It gives you the ability to choke the edge or spread it, and to blend edge pixels with a custom color background, which makes for virtually invisible keys. Look, Ma, no  lines!

There are so many controls in Keylight it helps to know what each does to the image. For example, there is one default setting which affects the quality of the foreground object color. It’s the Replace Method option under Screen Matte settings, and the default is “Soft Colour.” I found, at least with HDV footage transcoded to ProRes444, I repeatedly got better quality keys switching to Hard Colour, and early on this was a little “gotcha!” I had to track down, as characters wearing dark clothing were noisier than they should have been. Switching to Hard Colour cleared them up most every time. Your mileage may vary with “true” HD or stage variables. 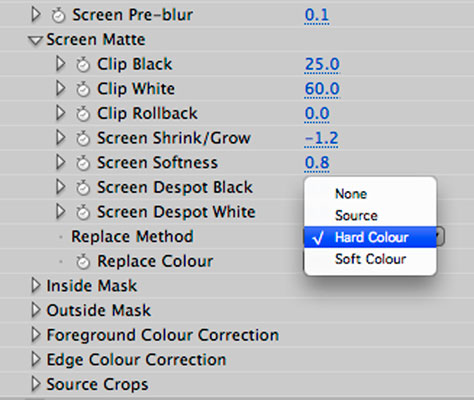 Though now available as Version 2.0 in Final Cut Pro, many prefer to use Keylight version 1.2, with identical controls, in Adobe After Effects, which has offered it preinstalled going back several editions. It's now also available as a version 2.0 plug-in for AVID DS, Shake, and several other systems. In FCP, you’re provided image wells to load custom inside (foreground) and outside (background) custom masks if you need them.

Keylight is available with a flexible licensing scheme-- you pick the lease time. Foundry support is responsive and constructive. The tutorials are concise, providing real feature film blue and greenscreen frames on which the product was actually employed. There are some insane examples of realworld footage they had to deal with. The website’s Keylight page shows it in use in FCP, and the revision history reports early bugs have been squashed.

Keylight can be described in a short time, and its default settings are good. Mastering custom controls of the toolset in a variety of stage and subject lighting situations takes a bit longer.

Keylight™ - a major key to success in the new economy. Also check out The Foundry’s Technical Academy Award-winning FurnaceCore plugins.

Loren Miller is a freelance storyline editor working both coasts, reports for LAFCPUG and other venues. He is inventor of the ShadowBuster™ greenscreen light prop table; develops KeyGuide™ shortcut placemats for popular media applications; and teaches college-level basic and advanced editing. Reach him anytime at techpress@mindspring.com.