A focus selling point for Motion, Apple's new compositing program, is real time video output of multilayer, multi-object projects. Unlike Adobe After Effects, which requires a render to preview a project, Motion heralds "real-time on-screen responsiveness and interactivity that feels like a dedicated system." <http://www.apple.com/motion/>

That's the hype, but what are the variables? They seem to be largely a function of three factors: processor speed, RAM amount and your graphics subsystem. Apple established the minimum requirements to use the app; otherwise it won't even install: <http://www.apple.com/motion/specs.html>

Try and you'll get this screen:

Questions remains about how a good video card, plenty of system RAM, and processing speed really contributes to the real time performance of Motion. And which of these factors produces what result in Motion? I tested these factors as they affect Motion's performance on a dual processor G5 2 GHz (rev.1). Please remember that my testing was hardly scientific, but it did leave some definite impressions. Your mileage may vary.

Our Stock G5 Specifications. This is a first generation dual processor G5 2 GHz. It has a stock ATI Radeon 9600 Pro video card with 64 Mbs of VRAM, a boot drive running a fresh install of Panther that has been updated using the 10.3.5 combo updater (not the Delta updater). Apple's stock SATA 160 GB boot drive has been augmented by a Hitachi 250 GB SATA media drive where all source files reside.

The Test Template. I selected one of the stock templates, and used a DV clip captured off a Sony DSR-30 deck using FCP HD 4.5 to the media drive. After substituting the clip for one of the elements in the template, I gauged playback both on a first pass, and then on a subsequent passed, because Motion seems to cache renders in system RAM. Our maximum playback was 18 fps, and our minimum was 13 on BOTH the initial pass, and the second pass. 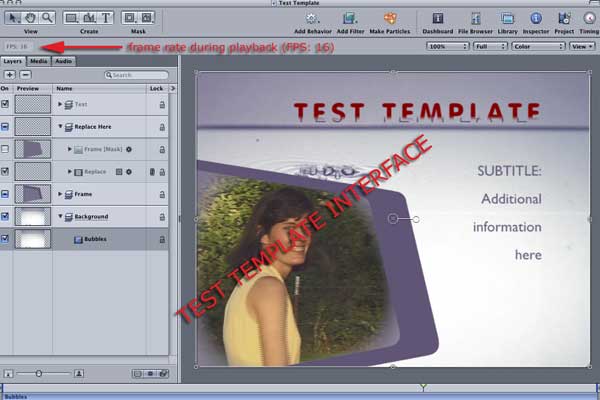 On a separate test, I added a soft focus filter to a video clip, and playback dropped below 8 fps.

New Video Card . . . Same System RAM. Next we swapped out the Radeon 9600 and substituted an ATI Radeon Pro Mac Special Edition. The card comes with 256MB DDR memory, dual integrated 10-bit per channel 400MHz DACs, an ADC and DVI-I port with VGA Adapter, and retails for $399.95 at ATI's web site. What distinguishes this card from the non-SE edition is the ADC port. Apple is strongly urged to offer ADC video cards as a separate purchase at the Apple Online store. The ATI specs: <http://www.atitech.com/products/radeon9800/radeon9800proseme/index.html> Currently, ATI offers a $50.00 rebate on the purchase of this card, or the 9800 Pro with the purchase of Motion. Check the ATI and Apple's Motion web site for details.

Our results: Maximum playback using this configuration, which quadrupled the VRAM was 23 fps, and our minimum was 14 on BOTH the initial pass, and the subsequent passes on the stock template. 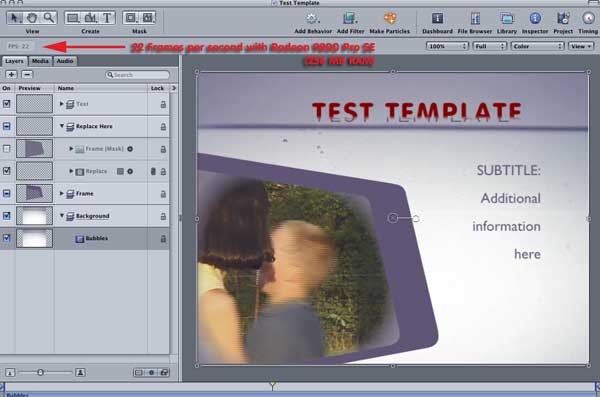 New Video Card . . . 4.5 GBs RAM. Larry O'Connor of Other World Computing, a leading supplier of a wide range of Mac products, including RAM, external and internal drives and other Mac only products, provided an additional 2 Gbs of RAM to test the final variable in the Motion equation: system RAM. <http://www.macsales.com/>

Then I changed the project presets to NTSC DV, saved the project, and relaunched the app with firewire out to my Sony NTSC production monitor. On the first pass I saw a low of 26 fps, and on subsequent passes it stayed at 30 fps.

Finally, I added a simple throw behavior to each of the layers. The frame rate remained unchanged. Adding a basic smoke particle emitter, however, dropped the frame rate to 14 fps on the first pass to 17 fps on the second pass. Not bad, especially with firewire out. With that disabled, it jumped back to 30 fps.

I also imported a SD D1 file exported with the animation codec, and stored on the internal Hitachi 250 GB SATA drive into a SD project. 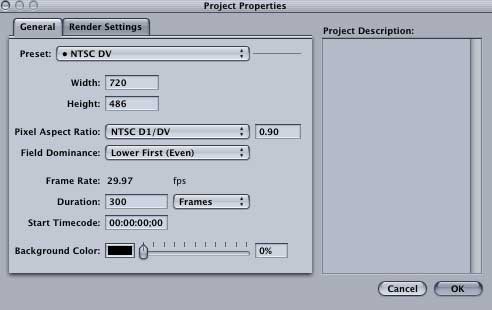 It played back uneventfully at 30 fps. I scaled it, brought in a resized DV clip and it continued to play at 30 fps. Adding a blend mode between the objects slowed down playback to 22 fps on the first, but it bumped to 30 fps on subsequent passes. I lengthened the project to a full minute, and playback was unaffected.

Even adding a soft focus blur for the full length of the animation file didn't affect 30 fps. Adding a light rays filter dropped the frame rate to 8 fps. Disabling the soft focus didn't change anything, with the hit being taken on the light rays.

As a final test before adding more system RAM, I add a bubbles rising emitter, and the uncompressed file played back at 30 fps. The "type" of emitter does make a difference, however. Add a more intensive emitter, like diesel fire, and playback dropped to about 19-22 fps.

A post by user on one of the boards seems to indicate that workflow on any system is handled this way:

The final variable was installing the additional 2x1Gb RAM sticks provided by Other World Computing for the purposes of this review. The RAM installed in the final two slots of my G5 bringing the configuration to 4.5 Gbs of RAM. 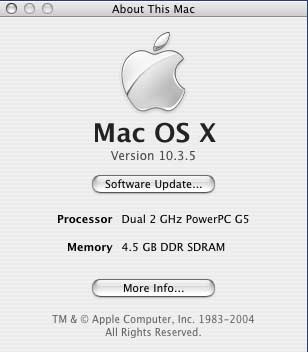 After repairing permissions, I launched my test template to continue testing.

On our stock template playback, I experienced no discernible playback change for frame rate. The results: Maximum playback using this configuration, which quadrupled the VRAM and nearly doubled the system RAM to 4.5 Gbs was 23 fps, and our minimum was 14 on BOTH the initial pass, and the subsequent passes. System RAM changes did not seem to affect frame rate as much as VRAM.

On the second test with the eight scaled, duplicated clips with two throws and a smoke emitter without FW out stayed at 29 to 30 fps per second until the basic smoke emitter kicked in, and then the frame rate dropped to 22 fps. Using firewire out, I saw approximately a 15-21 fps range, an improvement over the 2.5 Gb RAM configuration.

Interestingly, our compressed file with the diesel fire emitter played back slightly faster with firewire out, running at 19 to 26 fps.

It appears that the single most significant variable in the equation is the power of your video subsystem, your video card. The Radeon 9800 Pro SE, with 256 MB of RAM, currently is the most powerful shipping card for the Macintosh. Not only did frame rate increase overall, but Motion felt more responsive and snappier ­ certainly much more responsive than the 9600 Radeon with 64 Mbs of RAM ­ the stock video card in most 1st rev. G5s.

While the general belief is that emitters and filters gain the most from a powerful video card, the overall system configuration also contributes, it appears, to performance. This means media drive, VRAM, CPU, and system RAM. I definitely saw an increase in fps with filters when moving to the Radeon SE and with installing the additional system RAM. Obviously, I couldn't test processor speed because this is our only available production machine certified for Motion.

My experience and recommendation is to purchase the most powerful video card compatible with your CPU to maximize serious workflow and production for Motion. No doubt you can get by with less, but if creativity depends in part on working through various alternatives for your clients quickly with maximum feedback, your video card is the ticket with Motion.

The second recommendation is buy the most and best quality system RAM you can ­ particularly if you're running Motion on a G5. I recommend highly the people at Other World Computing, having purchased other Mac items from them in the past and never having a negative experience. Not all Motion projects are the same; some will be video heavy, and others will make extensive use of filters and behaviors.

In working through this review, I also experience a fairly significant fps range in the same VRAM/RAM/CPU configuration when running the same project. So as your projects become more complicated, your frame rate will not always be consistent as the OS pulls some resources differently at different times.

A good comparison of the Radeon 9800 SE with other Radeon and nVidia video cards can be examined at barefeats.com. The author gratefully acknowledges the kind assistance of Larry O'Connor and Other World Computing <http://www.macsales.com/> in providing additional 3200 G5 RAM for the purposes of this review.