Multicam Sync in Final Cut Pro
A workflow guide to syncing video clips using in-points
for use with FCP's multiclip feature. Assumes the footage
has been generated by free running cams some of which
have not been run continuously throughout the shoot.
Also contains a workflow for cutting a realtime event into
separate sequences to greatly reduce overhead. By Jon Hiseman

The multiclip function assumes that you have shot several angles of the same continuous realtime event on separate cams and wish to edit your footage in realtime by watching the event on up to 16 windows while choosing the camera angle of the moment.

The Current versions of FCP (5xx) allow you to sync cams by Timecode(the captured TC) or by in-points.

TC works perfectly well assuming all the captured timecode is in sync because you synced your cams to a code generator or ran from an agreed TC point running free in all your cams.

In-points work fine if all the cams start at the beginning of the shoot and run continuously throughout.

However, having got half way through editing a music shoot on 5 Pro HDV cams which did not have agreed free running TC or external sync AND stopped and started throughout I had to solve some of the limitations inherent in FCP's multicam editing feature ( vs 5.1.2). In theory my procedure below would allow the whole 55 mins to be created as a single multiclip but you can't show more that 16 screens on a multiclip and the set up procedure might take longer than the edit. See my comments about handling this later in this doc.

Method:
For this example we assume you know how to create and edit in basic multiclip mode. It's in the manual and well explained.
You should also know that it's easier to pull footage into sync by audio than it is by video unless you have a clapboard or other clear visual indicator.
Assume your cams have no interlocked time code.
Assume some cams have been turned off and on while others have run the length of the shoot.
Know also that where you set the in-point as the sync point has no bearing on the start of the multicam, i.e. if you had three full length cams running and the only audio or visual sync point was half way through, if you set that point as your sync point you can still multiclip edit from the beginning of the shoot (set the multiclip viewer's in-point to your first required frame before pulling it onto the timeline)
Assume for this example a multicam music shoot.

To create the multiclip using in-points as your sync reference choose a musical bar with a good bass drum beat on the soundtrack where the most cams were running. (we will call it the majority bar.)

Set In-points on the same beat of the bar for each of those cams.

All the cams whose footage contains the majority bar are in sync.
Those that don't are out of sync and will appear blank if the footage starts after or ends before your current position.
To pull them in sync this is what you do:

1. Select : Menu/View/ Show multiclip overlays. Each cam shows its captured timecode when play is stopped.
Make sure that when you play each cam or the soundtrack cam the sound source follows your choice of cam.

2. In the multiclip display in the viewer select one of the cams which are not in sync and and play the footage with this cam selected as the sound source. Choose an audio sync point (or incisive visual point) and shuttle it to the frame before - note down the overlaid timecode on that cam.

3.Then find and select from one of the in-sync cams the same audio or visual sync point and shuttle to the frame before - note the overlaid timecode (in case you press the wrong button in your excitement!) Leave the in-sync cams exactly at that position (don't hit play!)

4. Go back to the out of sync cam and holding down control+shift click your mouse down over the cam's footage moving to the left or right until the displayed timecode matches the timecode noted when you found it's sync point. (A trackball with mousedown latch mode is very useful here.) The cams will now play in sync and of course appear blank when there is no footage.

5. Follow the same procedure for all cams that are out of sync.

The only thing Apple could do to make this easier is to decrease the resolution of the mouse drag so that you could get to the nearest second quickly and then choose a finer resolution to get frame accuracy. At present it's a lot of mousing around.

The simple way for the FCP team to make the procedure above easy would be to retain the existing system for fine adjustments and make each cam's overlaid TC enterable, in order to move that clip's position relative the all the other clips. You would copy the timecode in step 2 and paste it in step 4 above.
No more endless mousing!

Multiple sequences:
Remember, any multicam shoot can be cut into sequences referencing the same captured media and all within the same project. This is useful if the number of clips generated during a long shoot exceeds the max. number of multicam screens available or you want to reduce the overhead on your system.

1. Again using a music shoot as an example, put all the media in a bin called song 1 - mark in-points for your cams and create the multiclip. Create a sequence and do the edit to the timeline. When finished, cut off the last clip & soundtrack the frame before you want the next song to start.

2. Duplicate the bin and rename as song 2. Delete the song 1 sequence and multiclip from this bin, set in-points for your cams at the first frame of song 2. Create the multiclip etc. as before and go on with this procedure for the whole shoot. Then create a master sequence and drag copy all the song sequences to it.
The concert will play out or create a QT movie perfectly with the one reservation; the joint between sequences in the master sequence can only be a butt joint - I haven't found a way to dissolve from one sequence to another.

Another tip - Lets suppose you have a section of footage on a cam that is poorly filmed but later on the same cam, another sequence of footage could be used to replace it. Normally one would have to finish editing and collapse the multiclip then start substituting shots with all the games associated with getting the visuals in sync with the soundtrack. BUT, you can actually duplicate - Edit Menu>Duplicate - any clip in the browser (clips in the browser are only pointers to the real digital media buried on your hard drive) and then include it in your multi-cam using the techniques above to sync it to the soundtrack where you want to substitute the footage. Neat!

Finally, assuming you are not yet tooled up with the last word in Intel powered Macs or turbo raid arrays (drool) you will probably be down-rezing your footage for the multicam edit hoping to reconnect all to your original hi-rez files after you have finished. I have found that this works flawlessly as long as:

1. You retain the same names as your original files at the down-rez point (an option in the dialog)

2. NEVER change the names subsequently in the browser of the low-rez project. Make all your comments in any one of the many Description/Scene/Shot/take/ Master comment fields in the browser.

A practical example
The browser snapshot below shows the captured clips from five cams none of which run the length of the shoot. During capture every time a cam has been stopped and restarted a new clip is generated. Even the cam which runs almost throughout (CamB_stage left,) was not operating at the beginning where the Majority Bar (MB) was selected. Clearly the only way to edit this shoot comprising 5 songs is to create a multiclip and sequence for each song and join them in a master sequence.
Song 1 "Breathless" (B'less) requires setting in-points for those clips containing footage at the MB but including those clip which have footage of the song before or after the MB. The two highlighted objects are the stereo audio mix from the separate recording of the gig(16bit/48k) and the playback clip generated from it which because it's actually a QT movie with blank video will appear as the master soundtrack clip in a Multiclip window. 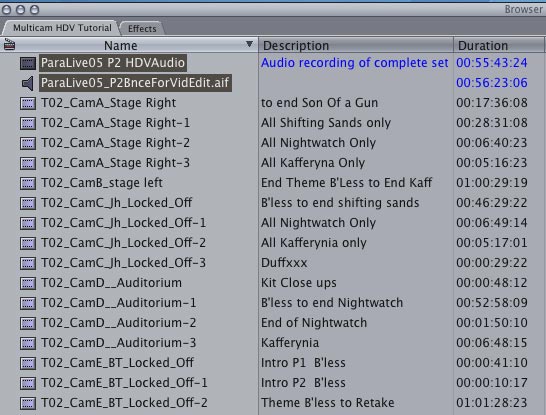 The highlighted clips below make up the Multiclip (topmost object) containing required footage for the first song - all the clips whose description starts with "B'less" contain the MB - all the others will have to be manually synced. The clips with no in-point set will be used in later songs(sequences). 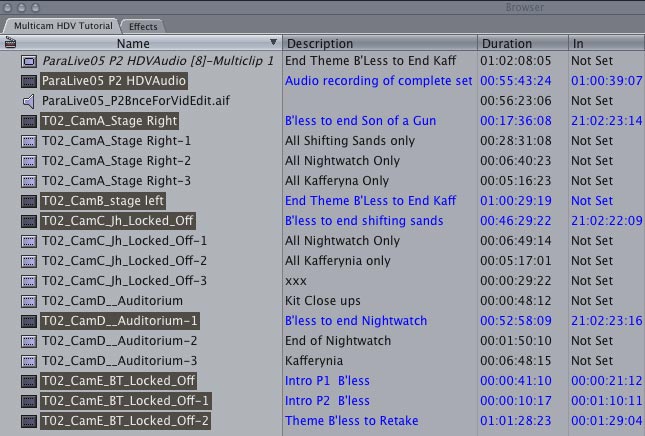 With the duration of the longest clip being in excess of 52 minutes the "make multiclip" dialog below can't really show the in-point relationships- indeed the third clip down seems to have no relevant footage at all but it does contain a beautifully filmed 4 bars lasting all of 10 seconds - Get it where you can! 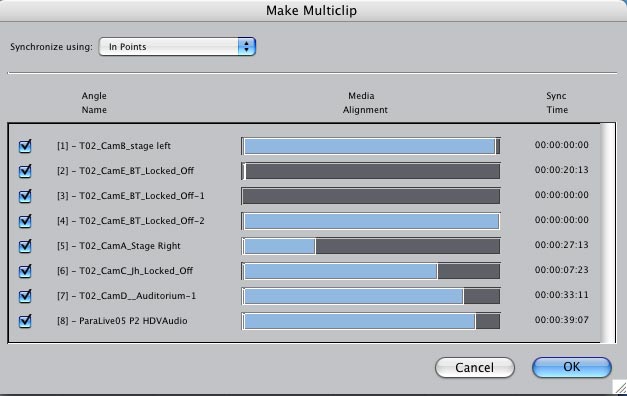 Here is the resultant multiclip with View/Show Multiclip Overlays selected. Holding your mouse down over the timecode in each clip window while holding shift+control allows you to change the clips timecode position relative to all other clips as described above. The good news: this multiclip snapshot was made using native HDV clips for clarity -the OK news: it won't play on my rig (G5 dual 2GHz/8GB ram/LaCie1T FW-2x500 as Raid) without falling over so I down-rez to photo jpeg and 12 windows run with no hitches. Mind you I can't see much! 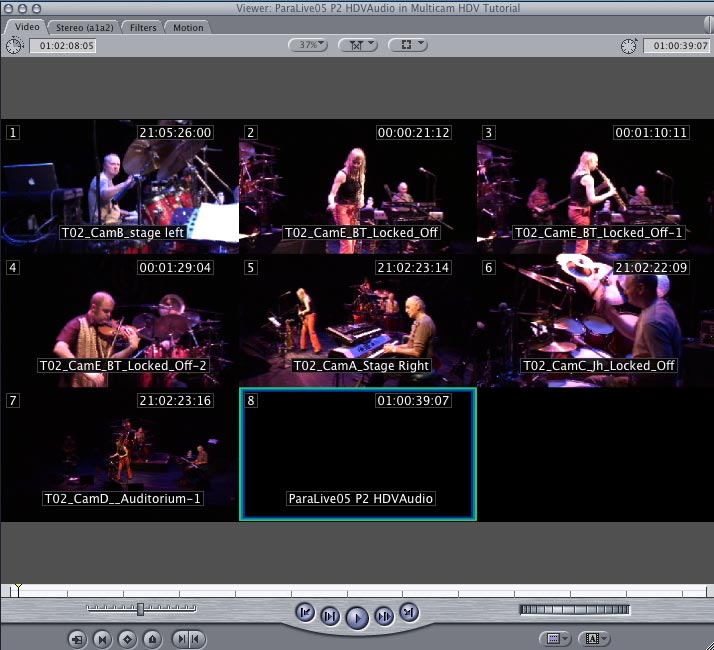 Here is the Timeline of the finished edit. The tabs along the top named for each song represent the sequences containing the multiclip edit for each song. The open tab is the Assembly Sequence containing the individual song sequences. Obviously you can return to individual song sequences to fine tune the cross over points between sequences and finally select all and export as a QT movie or use compressor to output your edit.

I used to be Jon Hiseman but am feeling much better now! That's because I started my career as a drummer and for the last 40 years have averaged about 60 concerts a year. My own group COLOSSEUM was arguably the worlds first ever Jazz- Rock band even touring America in the late 60's. I built a 24-Tk studio from the ground up in 1982 and today it's a state of the art Pro-tools facility and for 25 years I've been heavily involved in recording and producing all kinds of music, much of it for TV, so audio to picture sync has been with me a long time. I got into computers in the mid 80's for music(audio & score) production and embraced digital audio as long ago as 1983 producing the first all digital Jazz album for CD in the UK. A year ago following a five cam music shoot in HDV I decided to edit it myself in FCP. Having spent the last 20 years pushing against the boundaries of applications designed to facilitate the artistic endeavor and ferreting out features or workarounds, I naturally took the same approach to FCP.