Noise Industries released FXFactory v.1 eighteen months ago to coincide with the introduction of Apple's FXPlug architecture for Motion and Final Cut Pro. The debut package was an impressive bundle of filters, generators and transitions, all of which were optimized for GPU-accelerated rendering. You could even author custom filters and plug ins using Apple's Quartz Composer for use in FXFactory. V.2.0.2 improves and refines many of the plug ins, provides Leopard/FCS2 and FCE4 compatibility, and adds new capabilities to enhance the production value of your Motion, FCE4 and FCP projects. Some previously bundled filters are now sold separately, but the total number of filters has increased in the base package. It remains an excellent value.

Unique Installation. Unlike many FCP/Motion plug ins, FXFactory organizes its tools in an intuitive application/control panel that resides in your Applications folder. The pane is used to install and manage trial and purchased FXFactory and 3rd party filters. A help menu is available to explain the use and parameters of installed plug ins and new search function is included. The pane installs and uninstalls packages, registers serial numbers for new purchases, and provides a simple, attractive visual summary of what is available. 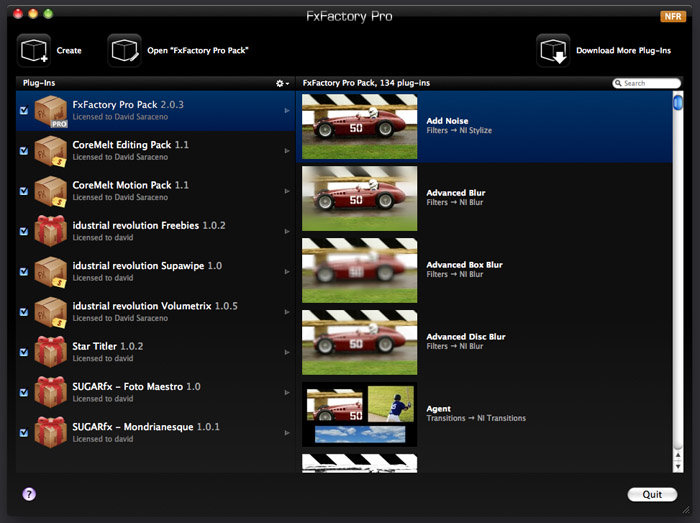 What's New and Improved. FXFactory is a Universal Binary app compatible with Leopard, FCS2 (including Motion 3), and FCE v.4, as well as later versions of Tiger. Check the web site to determine if your OS and pro apps are supported. The CoreMelt Editing and Motion packs are now unbundled, separate purchases. Despite losing these bundles, FXFactory actually increases its total number of filters. The Pro version breaks out to more than a hundred filters, generators and plugins. 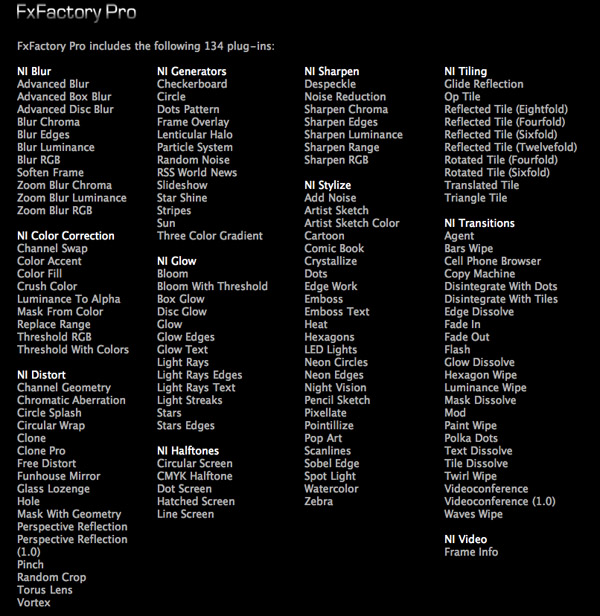 To incentivize an upgrade to Leopard, some new plug ins require Leopard to run. The dot version 2.0.2 upgrade includes five new effects -- Mask From Color, Color Accent, Cell Phone Browser, Color Fill and Replace Range. Many filters have presets that are accessed via a drop down menu and serve as starting points to achieve a custom production look. 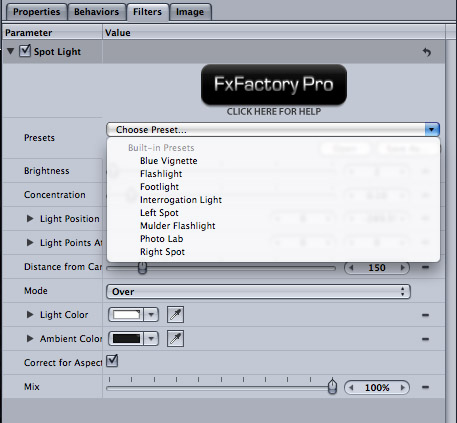 There are examples of each filter at NI's web site, or you can download a time limited trial version of FXFactory to evaluate the package. Third party developers provide free or time limited trial filters as well. Several filters are emblematic of the application's reach. They include an interesting Perspective Reflection, various glow filters, a Video Conference transition, paint and bar wipes, and the extensive availability of masks. There are dozens of filters available in Motion as well. A Slideshow generator will quickly produce a basic slideshow from a folder of stills you designate. 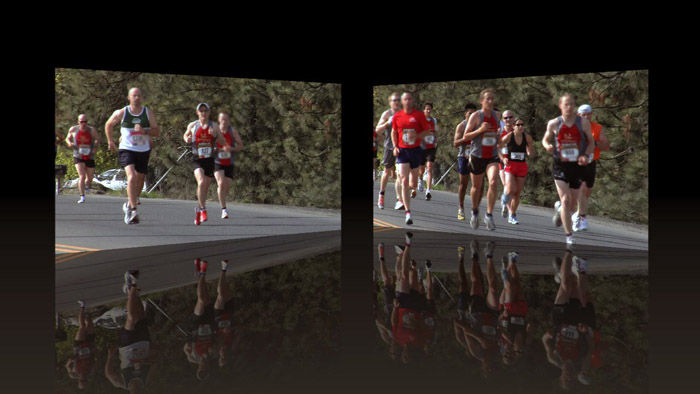 The Experience. NI's FXFactory demonstrates attention to detail in its interface and help system, two factors sometimes missing in other plug in packages. As noted earlier, help menus are available to explain each effect and its parameters both in the FXFactory application and in Motion or FCP/FCE4. The company is responsive to user suggestions, and works continually to update and improve its offerings. There are literally dozens of available generators, filters and transitions with distinctive styles, multiple presets, and numerous adjustable parameters. 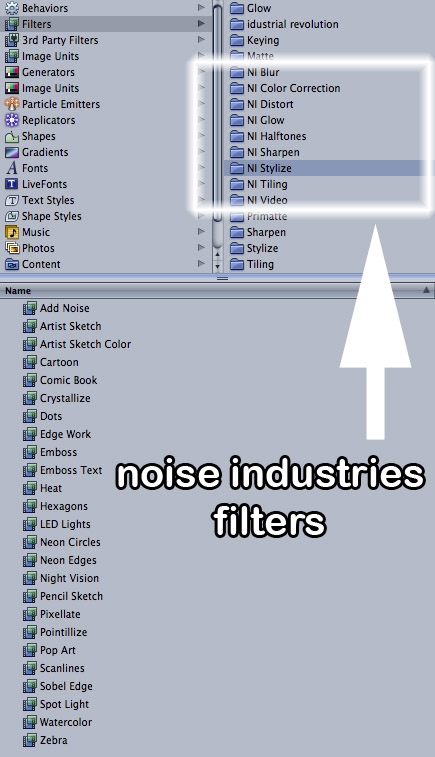 Improvements under the hood, among other things, include a high-precision output clamping option for several effects.

SupaWipes - Object Based Transitions. SupaWipes is an object-based wipe transition that is entirely controlled by parameters and requires no key framing. In a word, they are "cool." While not appropriate for every project, they can add production value in the right environment.

The wipes are object-based, which mean alpha channel based graphics such as CDs, dollar bills, airplanes, oranges, soccer and football control the wipe. You can even create your own alpha channel wipe object from a client's graphic or logo and use SupaWipes to animate it. 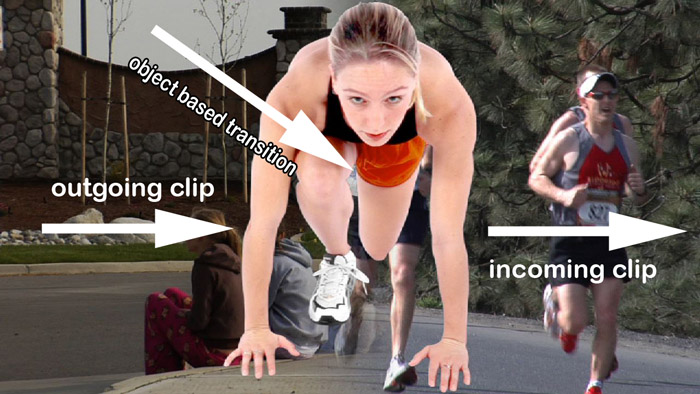 Numerous controls in the transitions pane govern rotation, angle, width, motion blur, use of a drop shadow -- and a lengthy list of presets is also available. Custom object wipes can be created in any graphic format that supports an alpha channel. 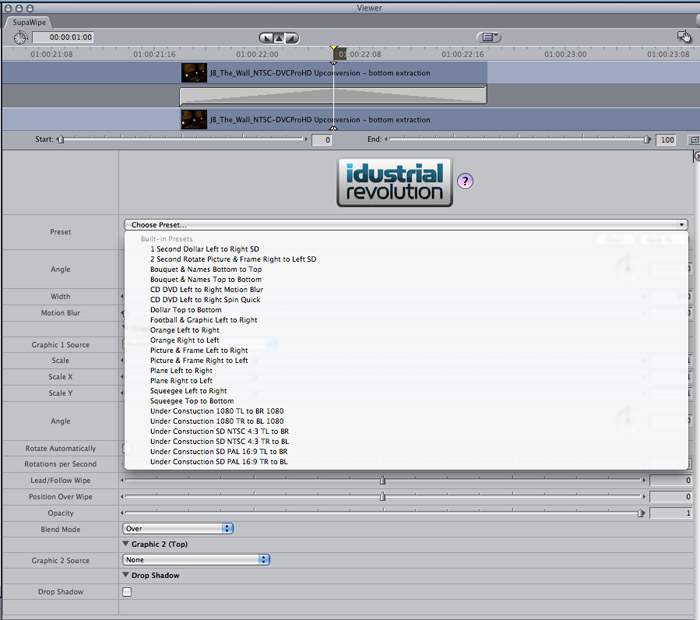 Final Thoughts. Noise Industries continues to refine, update, and expand its FXFactory motion effects package. The company is responsive to user feedback, and responsible in its development package. It quickly hammered out an update to FXFactory when an earlier version proved incompatible with p2 card input. Although the CoreMelt packages are now available separately, the FXFactory bundle has actually expanded its reach.

No one will find every filter useful, but most projects should benefit from at least one or several of these filters. To be a good value, a motion effects package must be easy to use, affordable, and provide a good mix of useful and customizable plug ins. On these factors, and others, FXFactory exceeds the criteria. It remains a true, affordable value.

David A. Saraceno is a motion graphics artist located in Spokane, Washington. He has written for DV Magazine, AV Video, MacHome Journal, and several state and national legal technology magazines. David also moderates several forums on 2-pop.com, and contributes as a Level IV as the Apple Professional Applications Discussions. [Top]
This article first appeared on lafcpug and is reprinted here with permission.