PAL Editing And TV System Conversion in FCP: PAL to NTSC and Back Again

The Wonderful and Mysterious DSR-11
By Ben Bryant

With the advent of the reasonably priced 24 frame DV camera I suspect fewer US movie makers will be shooting in PAL. The proximity of the PAL 25 fps rate to the cinematic 24 fps rate prompted a lot of folks to go that way and it's why I know this stuff. I'm cutting a feature which was shot with a Canon XL-1 Pal camera for that very reason.

I thought it was going to be a hassle before I started but it's only a matter of changing some settings in FCP and after that it's just ... editing. You will need to acquire some hardware however. I needed a new monitor anyhow so I bought the Sony PVM 14 N5U which reads both PAL and NTSC and costs just a bit more than an NTSC only model. And you'll need some kind of device for play through. When I started the aforementioned project I was using the director's camera for this but my (NTSC) Sony GVD 900 was getting cranky and I finally bought a DSR-11 which, like the monitor, goes both ways. (See last section of this article)

IMPORTANT NOTE: If you, like me, are tech-challenged, before you change anything make notes of what your NTSC settings were and what the PAL settings are for future switch over reference. This only applies to versions before the advent of "Easy Setup".

With FCP V2 you have a choice between the detailed settings menus I'm about to describe and the Easy Setup technique laid out above in the V3 section.

In FCP version 1.2.5 it's easy too but not quite as easy. In the EDIT menu go to > PREFERENCES.

In Capture, select the appropriate aspect ratio for your project and click or don't click the Anamorphic box, click the Video button and select Compressor: DV - PAL and FPS: 25;

Once you've okayed these settings your FCP is in the PAL mode.

To go back to NTSC just read these directions backwards. (Joke)

As to getting it all to work with play through; Take a look at the section on the DSR-11 (last section of the article) and apply the same approach to restarting, quitting etc. until you find out what works for your system.

NOTE: All this (below) will go either way; PAL to NTSC or NTSC to PAL.

So now that you know how to switch in FCP you're cutting a project in PAL and you need to screen it in NTSC; What to do? The best thing is to lay it off to tape and take the PAL tape to your friendly neighborhood format conversion house and have them make you an NTSC copy. If you can do that then forget the rest of this article and go back to your solitaire game.

However if that's not an option and you need to do it in FCP then:

The first time I did this I had a bit of advice from "Intelligent Assistant for FCP 3". It got me started but I had to figure out the rest as I went along. This is about how I did it and there are, no doubt, other ways to get it done so feel free to experiment for yourself as you follow this "map".

I converted the PAL feature (mentioned earlier) to NTSC for a director to use making finishing notes. While editing the project, as I said, I used the director's PAL camera as a deck but when I did the conversion I had no PAL deck or camera. When you do a conversion in FCP it doesn't matter if you don't have a deck in the format FROM which you're converting. You only need a deck in the format TO which you're converting. My new monitor, also mentioned, (Sony PVM-14N5U) will read both NTSC and PAL.

Here's a method that I know will work.

With your NTSC deck turned on, open FCP/NTSC and create a new project and a new sequence then save it as "Whatever NTSC". Without changing any settings, open the PAL version of the project. A still picture may appear on your monitor and when you play the PAL timeline you will see and hear it on the Mac monitor but the picture will remain frozen on the video monitor. If your monitor is NTSC only you may not even have a still on it. I don't know but it doesn't matter as long as you can see it on the Mac. You now have both the PAL project and the new NTSC project open in your browser. 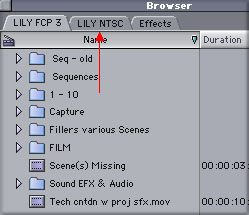 In your PAL project go to the Browser, pick the sequence and duplicate it. Duplication is not strictly necessary but I recommend it as a safety measure because you're gonna be messing around with these sequences and you don't want to take a chance of fouling up the originals. Having opened a copy of a sequence, select a chunk no more than 3 minutes long and copy it. If you used nested sequences in the original project do not use them for the conversion. I tried that and it was a "train wreck", video layers were all over the place. Go back to your pre-nesting sequences and bring them into NTSC. Then you'll be able to fix the bizarre oddities I'm going to mention a couple of paragraphs further along. Be sure you select all your layers of both audio and video. Once you've copied it all click on the new, NTSC project tab to activate it. Place the cursor at the head of the timeline and paste what you've just copied from PAL into the NTSC sequence. Render - then play the NTSC timeline. 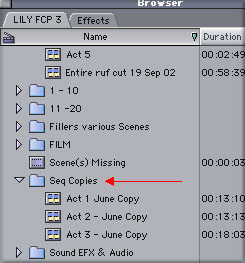 If you're anything like me you'll feel elated. Son of a gun, it worked!! Now comes the first wrinkle. You'll notice somewhere between 1-1/2 and 3 minutes in, maybe sooner, that you're losing synch. The longer it plays the worse it gets. I can't explain this phenomenon in proper techspeak but what's behind it is this; the frame rates and frame sizes are different in the two systems and in some (to me) incomprehensible way this causes the converted sequence to gradually drift out of synch. The cause/effect makes sense logically even though you or I may not grasp the underlying cyber details but we don't need to as long as we know how to fix it. It's probably out of sync after the first second but this slippage remains outside the range of perception for a while. Since no one is likely ever to use a system conversion done this way for anything other than viewing a "work print" of a project in progress, a little synch loss can be tolerated. Once you reach the point of intolerability chop it off at an edit point, go back to the PAL sequence and grab another chunk (starting where you chopped off the newly converted sequence) and repeat the process. 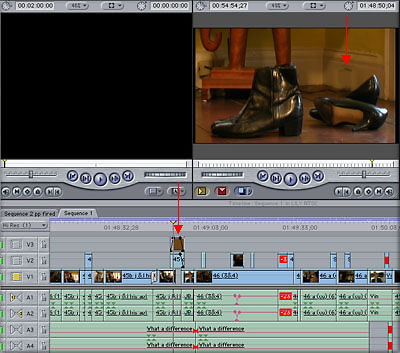 Depending on the complexity of your project - how much compositing and audio mixing you've done - other bizarre oddities may show up like layers of video that either aren't there at all or are in the wrong place. One example I experienced was that a matte I had placed on V3 to cover an anachronistic electrical adaptor wasn't there in the NTSC sequence. Once I found it (in the PAL) and moved it to the NTSC project I needed to reset my keyframes and opacity. Whenever you encounter this sort of issue play around for a while and figure out how to fix it. There are way too many possible variations for me to begin to try to cover them all but if you think through your specific problem you should be able to solve it. If you can't, send me an e-mail detailing the dilemma and I'll try to help.

The Wonderful and Mysterious DSR-11

The Sony DSR-11 is a DVCAM/DV deck (both speeds/both sized tapes) and it plays and records both of the formats I've been writing about. For a FinalCutPro editor it's two grand well spent.

The reason I called it mysterious is that it's supposed to switch automatically between NTSC and PAL depending on what's coming out of the firewire plugged in to it. The manual says it will do this and one or two editors I've contacted agree. Try it the way the manual says and maybe in your case it will work. But my experience, as well as that of many editors who have posted here and elsewhere, is that it won't. Once again the inexplicable mysteries of the magic boxes we work with jump up and bite us where we sit.

Here's the way I get mine from NTSC to PAL and back again:

1) Quit FCP, shut down your Mac and turn off the DSR-11.
2) Using the tiny switch in the back of the DSR-11, red arrow above, (You'll need a small nail file or blade of some sort.) go to PAL and startup your Mac.
3) Once the Mac is up, turn on the deck and open a PAL project. In the Edit menu select Easy Setup and chose your project title if you've created a setup for it or DV-PAL if you haven't. You should now be ready to boogie in PAL.

To go back to NTSC simply do it all again, this time with an NTSC project and its Easy Setup. Here's another wrinkle; sometimes after you've done all this (going in either direction) you still won't get a picture on your video monitor. Never fear, quit FCP and reopen the project and all will be well.

All Mac users know how individualist and, forgive me, cranky our beloved machines can be. What this means is that with your machine, following all the above instructions may not have produced the desired result. Don't worry, the order I've laid out works with my G4 and maybe you'll need to try a variation or two with yours to make it work. Try the same things but in a different order. Eventually it WILL work. Each time you run through the steps make note of the order in which you do them so that when you set the proper routine for your system you can repeat it without trying it 43 different ways all over again.

Ben Bryant has acted in prime time TV shows and commercials and on Broadway, sung at the Metropolitan Opera and in Jazz clubs, produced over 1,000 TV commercials and dozens of industrial films, worked as First AD on features, produced and directed over fifty TV shows. Now he shoots, directs and edits video productions of all varieties.
Ben Bryant Web Site