Is it a application, is it a plug-in, does it pound through your syncing frustrations as a train through a balsa-wood blockade? Actually, it is all these things. Singular Software has come out with PluralEyes, now in its 1.2 version, which provides automatic synchronization with or without time code enabling you to sync your multiple audio and video layers seamlessly.

PluralEyes is downloaded into your applications folder and, if you do a lot of multi cam editing, you will most certainly want to drag the PluralEyes icon into your dock, which is what I did for this review. PluralEyes runs as a 32 bit plug-in for both Final Cut Pro and Adobe Premier Pro CS5 but will run as either 32 or 64 bit when using Sony Vegas Pro. Should Final Cut Pro eventually come out with a 64 bit version, hopefully, Singular Software will produce a similar 64 bit version for Final Cut as well. Not completely sure that for a plug-in application like PluralEyes, it would make a difference. Currently, PluralEyes does not run on either Final Cut Express or iMovie.

In the past, syncing clips from multiple cameras was a task that looked at multiple hours and frustrating issues. This is no longer the case as PluralEyes really does what it advertises; it dramatically enhances and speeds your workflow for multi-camera and dual audio productions syncing all your video and audio layers spot on.

To test PluralEyes I had a couple of very inexpensive camcorders, recently reviewed, hanging around and set them up on opposite sides of my drum kit. Dreaming of being the next Max Weinberg from Bruce Springsteen's E Street Band, I had a wonderful time waking the neighbors while performing a heart-stopping drum solo that chased my two dogs as far as they could go to the back room. All testing was done on a 2 x 2.66 GHz-6-Core Intel Xeon Mac Pro running Snow Leopard on an NVIDIA FX4800 card and 20GB ram.

In use, I was surprised at Plural Eye's simplicity. You first open a project in Final Cut Pro and create a sequence whose clips need to be synced. After importing the footage from the two cams into FCP and transcoding them both to Pro Res LT, I dropped them in the timeline nowhere near each other. Wanting a 3rd camera angle to test with, I duplicated one of the clips and dropped it in the sequence as well. I then locked the audio layer of this clip and dragged the video out of sync with its own audio. This left 3 separate video and audio layers completely out of sync with each other. Though I could have placed many more video/audio clips in the timeline, three was a good start.

Three audio and video layers of the same shoot are totally out of sync with each other in this initial set-up. 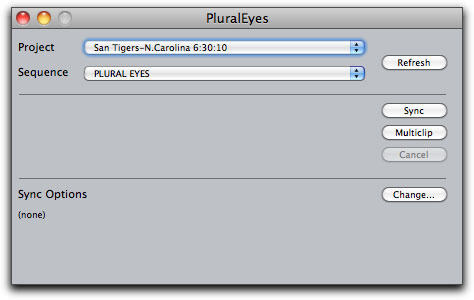 PluralEyes then duplicates the sequence and will give it the name 'pluraleyes 001'. With a surprisingly fast moment of 'preparing data' and 'Analyzing', PluralEyes synced the three clips perfectly in their own 'PluralEyes' sequence. A multi clip sequence is also constructed and placed in the Browser.

The entire process took only a moment and worked every time no matter how convolutedly I un-synced the different audio/video layers from each other.

When bringing clips into a sequence where the chronological order is important and some of the cameras may or may not have been turned on or off at different points in the shoot, PluralEyes can use this information to still be able to sync the audio and video. In this case we can start with the PluralEyes options set to 'None'. Should any of the clips fail to be synced, they would then show up in a separate red labeled sequence named 'pluraleyes 000 unsynced'.

There is no need to make any changes here unless you find that some clips did not sync.

This did not occur to me but with several more cams or clips, there is that possibility. Should this occur go back to PluralEyes but this time click on the 'Change' button. Check the 'Clips are in chronological order' box, click OK and hit the Sync button again. You should find that now all the clips, are in sync. 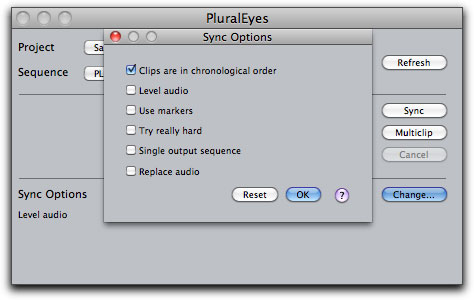 I have found that Multi-clip editing within Final Cut Pro can sometimes be a bit buggy. I notice that there can often be a lag when switching camera angles or the multi-clip markers do not always get made when using the Viewer to switch angles. On the whole, it is better to use the FCP multi-clip buttons to more effectively switch angles. While it may be a minor issue, when reopening a multi-clip sequence remember to change the playhead sync button in the Viewer back to 'Open' so that both the Viewer and Canvas are playing the same frames in real time. When closing Final Cut the playhead sync button always defaults back to 'Sync Off'. I kept forgetting this so here is my own reminder for one and all.

While syncing with PluralEyes was picture perfect each time, it was only when I used Plural Eye's own Make Multi-clip function that I ran into trouble. When I attempted to use the multi-clip sequence made when using PluralEyes, it did not always want to change the camera angles. This occurred a few times and the problem was intermittent. If I highlighted the now synced clips in the browser and used FCP's own 'Make Multi-clip' there were no problems.

A 3 camera angle window in the Viewer for this multi-clip edit. I found that switching angles by clicking in the Viewer didn't always work as it should.
It is better, and quicker, to use Final Cut Pro's own Multi-clip angle buttons/keyboard shortcuts to change between camera angles.

It is, and always will be, a pet peeve of mine when software companies do not have any sort of 'check for updates' button, or do not notify you, via your registration info or serial number, that new, updated versions are available for installation. My second big peeve is when companies do not provide an understandable manual or, even worse, bother to take the time to produce good quality video tutorials on their websites to help the new user come up to speed with their new purchases.

That is most certainly not the case for Singular Software. I opened up PluralEyes again yesterday and a window opened letting me know that an update was available. I didn't even have to check. I did the install and continued on. Just as important, Bruce Sharpe, the creator of PluralEyes, has produced several excellent video tutorials on the Singular Software website that are sequential, properly paced, and easy to watch and understand. You can tell that he placed a major concern for his clients at the forefront of Singular Software's priorities.

There is no question that with the availability of PluralEyes to ease the aforementioned difficulty and frustration ascribed to syncing footage shot in a multi-cam setting, an important void in the editor's toolbox has now been filled. There was strong and positive buzz about PluralEyes long before I got my hands on it. Unlike many movies that critics praise and then, subsequently, disappoint the general public, Singular Software's PluralEyes becomes an instant 'Must Have' for anyone editing multi-cam shoots. That's my bottom line.