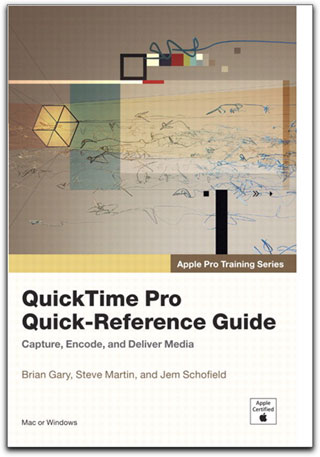 
Not too long ago I had the chance to review Brian Gary's Quick Reference Guide for Compressor. I hadn't expected such a thin book as that to be as good as it was, nor as thorough. Now Brian has teamed up with Steve Martin and Jem Schofield to produce another Quick Reference Guide under the Apple Pro Training Series, and this time it focuses on all that you can do, but probably don't, with QuickTime Pro. And, once again, the trio of writers pulls off the trick of compiling a great deal of information into an even narrower number of pages. Arriving at your bookstore with 138 pages (it can be downloaded from the Peachpit Press website as well, http://www.peachpit.com) you will find this reference guide to be as thorough as its predecessors.

What the QuickTime Quick Reference Guide really does is forgo much of the theory which can often confuse the newcomer, and get down to the brass tacks of utilizing the many features and functions of QuickTime. The authors take you through many of QuickTime's capabilities with great graphic illustrations and step-by-step instructions. Sure, there is the obligatory 'Getting Started with' opening. After all, where is there a book without one? Even then, this opening chapter provides easy to follow, detailed instructions on recording both audio and video clips for both Macs and Windows as well as the different Saving and sharing methods for email, internet and your own website. Then things get more interesting. In the second chapter, "Exporting Movies", exportation steps are provided for iPod, Apple TV, Still Images and Image Sequences, Audio and Podcasting as well a thorough review of suggested codecs for individual uses.

Further chapters covering editing, creating interactive movies and delivering them are easy to follow and interesting as well. I wasn't falling asleep and that is saying something right there. A pretty complete chart entitled "Codec Central" is laid out with each codec's suggested application, and its' Pros and Cons for usage can come in handy. No one can be expected to memorize all of this, so having it at a quick grab, when needed, will make someone appreciate it when the need occurs.

The chapter on Delivering your movies is exceptional. It gets you off to a running start whether you want to use a progressive download, use real time streaming, or send to a cellular phone. Suggested settings for all are provided as well as, in a further chapter, full coverage of all QuickTime Pro preferences, controls and a lot more that most probably aren't even aware exists.

While the QuickTime Pro Quick Reference Guide is of excellent quality, I do bemoan the increase of price as compared to Brian Gary's last Quick Reference Guide for Compressor. Thirty dollars for a 138-page book seems to be a bit much. Maybe with 3 authors and the price of petroleum going up it was necessary but it's not the rational I would use. At any rate, with this, my view at a second Quick-Reference Guide, I can only say that these small reference books will be the way to go for many editors looking to get a ready jump on things, wanting to have something light weight to carry with them, and an easy to locate reference tool. The book succeeds in every way.