The FCP Community loses a piece of its heart 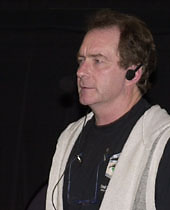 I first met Ralph Fairweather on the online FCP discussion forum 2-pop.com, in June of 1999. I spent a couple weeks lurking before I had the courage to make my first post which wasn't easy as I still didn't understand most of what these people were talking about and damn if I wasn't going to make a fool of myself. The language of NLE was as foreign to me then as Swahili is to me now. So I figured if I ease myself into the forum, I might be taken more seriously down the line and maybe even welcomed and people would forgive me my stupid questions. So I made my first post; "Who is Ralph?" I asked. I got a response in a few minutes which was pretty exciting to me. "He works for Apple." someone said. Well that figured, I thought. Who else would have this knowledge and information except someone from Apple. Only thing is, it sure didn't seem like this Ralph guy worked for Apple. I mean, Ralph didn't just answer people's posts, he composed the answers. These were eloquent essays worthy of publication. This guy not only solved your FCP problem but inspired you to write for the New Yorker.

Ralph and I first met in person at Ken Stones house in Los Angeles shortly after Ralph left Apple to take over 2-pop.com. By this time FCP was well on it's way to becoming the NLE of choice for editors and directors alike. FCP was the only affordable solution at that time for sure, but more importantly it was supported by a community of users all of whom had met on 2-pop.com and all of whom gave an enormous amount of their time helping each other. At the heart of this community was Ralph Fairweather. He was, to borrow a well worn phrase, "THE MAN." 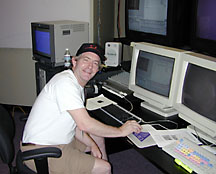 Many of the "big" names were there that night. Kevin (Telly) Monahan, 2-pop founder, Larry Jordan, Andrew Balis, Doug Lindeman, Ken Stone, and I can't remember who else. We were there to discuss launching the LA Final Cut Pro User Group because we were tired of Telly razzing us about the San Francisco User Group, and we were there of course to meet, "THE MAN"... (who showed up about 40 minutes late which gave us all time to drink Ken's beer.)

Ralph finally showed up, and as is often the case looked nothing like I imagined he would look like. My picture of Ralph had him looking like William F Buckley with a dash of Tom Wolfe. Instead, in walks this middle aged guy wearing Bermuda shorts, T-shirt, and one of those "director vests" with all the pockets. His hair was a unruly and he looked quite honestly like one of those guys who are ambushed for a make-over by those 5 "Queer" guys.

Ralph doesn't talk much in person. He is a man of few words as they say. We'd each ask him a question and more often then not there would be a long pause as though he was searching for the exact words needed to reply. This would be followed by a long "welllllllllllllllllllllllll," followed by a breath, a couple nods of the head, a stare at the floor, then a burst of carefully chosen words, another pause, then a long "annnnnnnnnnd," a few more words, and finally, silence. This made for an interesting first impression by all. 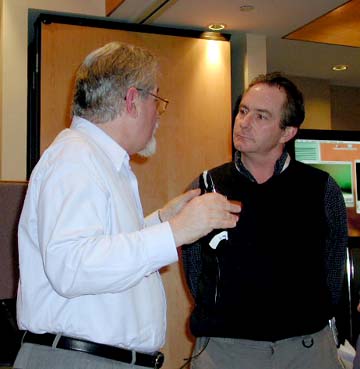 A few months later we launched lafcpug at Video Symphony in Burbank.<http://www.lafcpug.org/user_meeting_6_21_00.html> By this time Ralph and I had become close friends and we "talked" almost daily.

Ralph was our special guest that first meeting and the room was packed. All these people came not so much learn a little about Final Cut Pro, but to see and meet Ralph Fairweather and to see and meet each other.

Ralph was never comfortable with his celebrity and getting him to show up and actually speak in front of a group of people was not easy. It took a little coaxing and nudging on my part, but because this community was so important to him he gave in, showed up, (in tattered shorts, T-shirt and baseball cap) and showed us all FCP 1.25. And thus began lafcpug, an extension of the 2-pop community and an extension of himself.

Over the next year or so Ralph was a staple at lafcpug meetings and along side Andrew Balis inaugurated "Stump the Gurus" in November, 2000. It was his idea for Stump the Gurus and yes, he never got stumped. 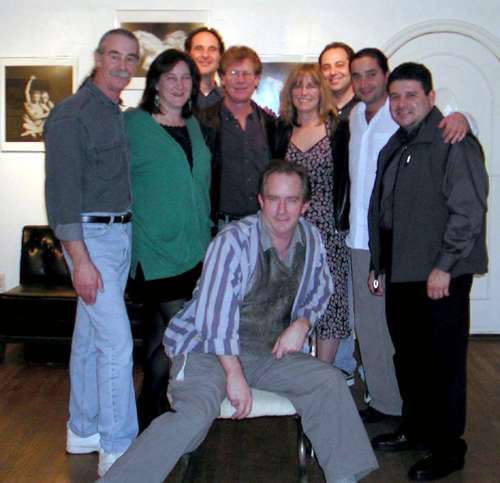 Ralph ultimately left LA and 2-pop to return to the Bay Area which he called home. That was where his son Abrol and where his granddaughter lived. I threw a going away party for him at Ken Stones house and that night was a mixture of celebration and sadness.

Ralph and I corresponded over the next couple of years and we would meet up at various trade shows around the US and hook up with the likes of Charles Roberts, Doogie, Lisa B, Loren Miller, Telly, Tom Wolsky, Ned Soltz, Ramy Katrib, Charles McConathy and so many others. Everyone knew Ralph and Ralph knew everyone.

Occasionally he'd make it down to a lafcpug meeting and there was always a bigger crowd when people knew that Ralph was going to be there and always, ALWAYS after introducing him someone in the audience would shout out,"THANK YOU RALPH." Happened every time. I'd like to think he was moved by that, but he never showed it.

The last time I spoke to Ralph was Sunday, Nov 23. He had taken over authoring the lafcpug DVDs since March 2003 and we were talking about doing a "Best Of Lafcpug" DVD to be released in a couple weeks, 'just in time for Christmas.'
"This one was going to be huge," I said.
"Yeah, I hope so," replied Ralph. We've only sold 3 Novembers. Good thing I have a sense of humor." We never did make much money on these DVDs as hard as we tried and as hard as he worked on them. Didn't matter though. It was an excuse to hang out with my friend Ralph.

I got the call from Telly on Tuesday morning Nov 25 that Ralph had passed away. It still hasn't sunk in. When death is so sudden we mortals just can't grasp the concept. Come on, I still have a few of his emails in my mailbox that I haven't answered. He's got my tapes from the November meeting. He's been booked to do Stump the Gurus at DV Expo in 2 weeks. His name is all over my forum. Who the hell is going to be around to figure out the Media Manager? What is this, a joke? Telly was crying and I couldn't say anything to make him feel better.

Tomorrow is Thanksgiving here in the US. It's a holiday where we are instructed to be thankful and give thanks for all we have. We do this over a dinner of Turkey and Gravy. I won't be mourning Ralph's death tomorrow. Instead I'll have a glass of wine and be thankful that he lived. And everytime I open up Final Cut Pro I'll remember him and since that is everyday, he will never be gone. I think I can handle that.

Ralph leaves behind his son Abrol, a granddaughter, a sister, a community of tens of thousands of FCP users and a fellow here in Los Angeles who loved him.