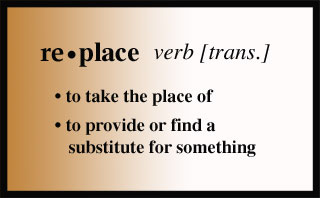 There's a type of edit in Final Cut that often goes un-used to its fullest potential, and of course I'm referring to Replace edit. This article will hopefully de-mystify this type of edit, going over how Replace edit works and some of the myriad of scenarios where it can be most helpful. In brief, it can be used to make simple and repetitive tasks quicker and more efficient. But it can also be used as a way to replace a shot in the timeline easily in a way that matches the action of the shot to be replaced, or replace a shot in a way that matches the action to other clips in the Timeline.

First let's explore a bit about the basic way this edit works. Let's say you have the following Timeline:

Let's also say that you want to replace clip B with a new clip, clip E. Start by opening the new clip (E) into the Viewer.

In the Timeline, move the playhead somewhere over clip B. Set the target panel to V1.

Playhead over clip B

Drag the clip in the Viewer to the Canvas and drop on the edit overlay for Replace edit. 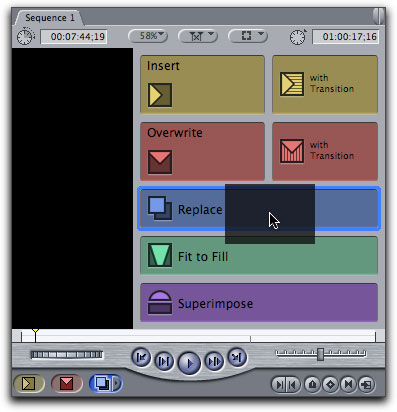 In the Timeline, the new clip E would now be where clip B used to be. Since no in or out points were set in the Timeline (we'll come back to this later), then the entire clip under the playhead is replaced. Nice and simple.

Alternatively, there are two other ways to perform this edit. You can also:

This basic use of Replace edit is great for certain things like replacing temp titles with finished titles or replacing placeholders for final graphics. No need to set in or out points, figure out any durations, or do any math for that matter, you simply use Replace edit and you get a clip in the same positioning in the sequence and at the same duration as the previous clip.

How Content is Replaced
When replacing graphics, text clips and some backgrounds, the exact content doesn't matter. In the case of a graphic, it's the same frame from first to last. Our simple mission in the previous example was to replace the Timeline clip with a new clip at the same duration of the old clip in the Timeline. Replace edit does that fine.

But the real power of Replace edit hasn't been discussed yet. Its just how the content of the Timeline is replaced with new content that makes this such a powerful tool. 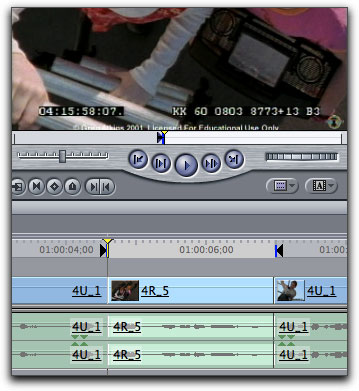 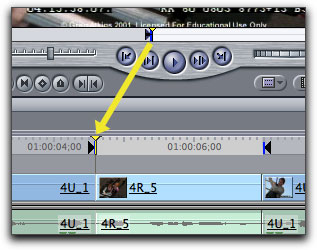 Although Replace edit also does a sort of 3 point edit, it differs from Overwrite and Insert edits in that it doesn't use the in points or out points on a clip to determine what portion of a clip is edited into the Timeline. Replace edit allows us to change out the shot using another reference point, one not necessarily found at the in or out point of the edit. 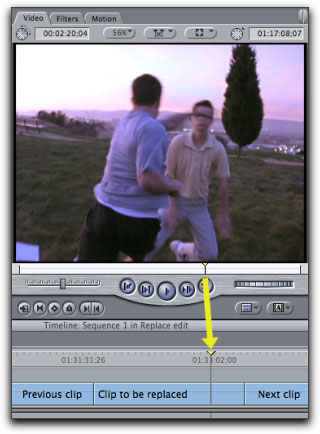 The rest of the clip is then replaced by other frames from the source clip in the viewer.

To look at it another way, let's say our Timeline clip is 5 frames long. The playhead is positioned at frame 4, as seen next.

Let's say we open this clip into the Viewer and position the playhead at frame G. 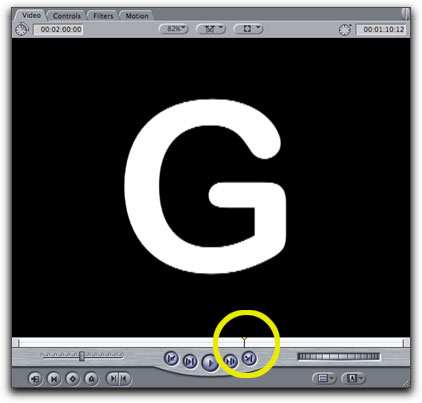 Then if we perform a Replace edit, the resulting Timeline clip will still be 5 frames long like the original, and would look like the following:

Frame G is edited to the Timeline's playhead, which was parked over frame 4.

If on the other hand, the playhead in the Viewer was parked at frame I, you'd still get a five frame Timeline clip, but with different frames.

This time, the frame I is placed at the Timeline's playhead position.

This long-winded example is my way of saying that Replace edit allows you to choose content based on the playhead positions, not based on in or out points. This frees you up to a lot of possibilities, as well as doing certain tasks quickly and efficiently. Think of this edit when you're trying to replace a similar action from one shot to another- the original clip in the Timeline, and the replacing clip in the Viewer.

In the following example from a scene, a boy watches through a telescope, realizes he's been caught spying something he shouldn't, and another boy rushes toward him, punching him to the ground for the supposed misdeed. In the following strip, I've pulled out several frames from one of the shots in the scene so we can get the general idea of the action. The second boy rushes forward into the scene, punching the boy behind the telescope, to the ground.

Let's say that you've used this particular take in the sequence, but now want to use or try out another take. Both takes will have similar action making them the perfect choice for Replace edit.

Notice in the above strip, the beginning of the Timeline clip is on a somewhat ambiguous moment. The second boy hasn't yet entered the frame, and there's nothing in the beginning of the action that's going to be exactly the same in both the first and second take. This is not a good candidate for a standard Overwrite edit, because the in and out points of the shot don't give us a good reference point, but the clips do have elements that make it ideal for a Replace edit.

There is another point in the action of the scene that would be important or similar in any take, in this case, the moment of the punch. This action happens in both takes and is easily identifiable (and of course an important moment in the shot). So, based on the above strip, a better point to match would be the fourth frame from the left.

In the Timeline (or Canvas), we would start by placing the playhead directly on the frame of the punch's impact. Then you could open a new take into the Viewer. Place the playhead over the same point in this take, the punch. 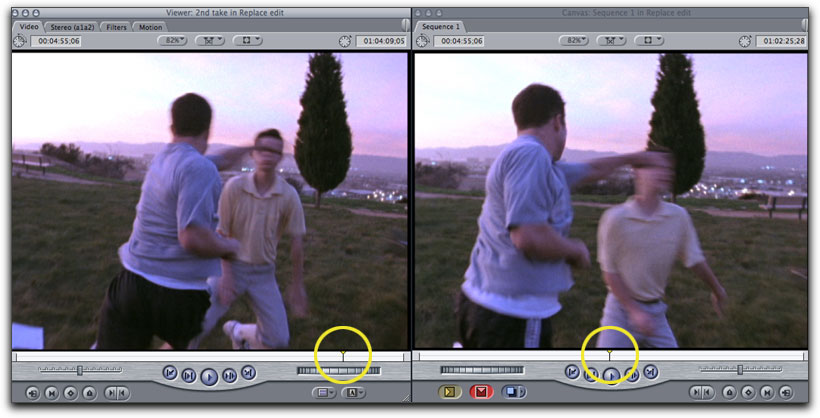 Perform a Replace edit by dragging the clip to the Canvas or pressing the blue Replace button in the Canvas. Although there may have been different pacing between the two shots, the new shot is in the Timeline, and the punch happens at the same point in the sequence as with the previous shot. Pretty cool and fast!

Replacing Similar Content
In this last example we replaced one take of a shot with another take of that same physical action. But you can expand on this and use it to replace all different kinds of elements that share similar action. And this doesn't need to be a physical action, it can even be something like similar dialogue that happens in two different shots. The following is a list of some of those things that Replace edit is especially good at.

Replace Edit To Simplify An Edit
These are some of my favorite uses of Replace edit.

In these cases, you could use other edits, but they would require too many steps and/or can easily bring up error messages from Final Cut.

Replacing A Clip With A Split Edit
Replacing a clip with a split edit, an overlap of video and audio, is incredibly simplified with Replace edit. In the following example, the beginning of clip 4S_1 has a split edit. We can use Replace edit to replace the entire clip, split edit and all. In this example, to set up for the edit, the playhead is placed just before a word of dialogue that's the same in both clips. 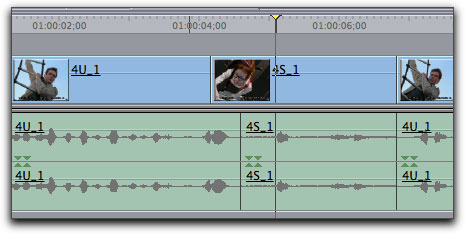 After Replace edit, the new clip, 4R_5 is in its place, as seen below. The dialogue lines up in the same approximate place (although notice the higher audio levels in the new clip). The video overlap remains. Its an elegant solution to a common scenario. 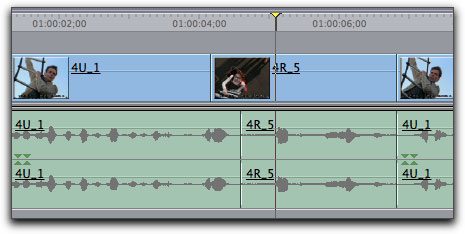 If instead we did this edit as a standard overwrite edit it would have required more steps, like setting split marks, in other words, separate video and audio in points, like the example below.

Its doable, but would take longer.

Replacing A Clip With Transitions
In the following example, a video montage, the middle clip, titled Bench needs to be swapped out for another clip, Steps.

Like in the last example, a standard Overwrite edit wouldn't work here as you'll either get the following error message or you'd have to remove the transitions and re-apply them (either overwriting them, or by removing the transitions before the edit).

Again, Replace edit is much simpler. Simply position the timeline playhead over the clip to be swapped out, then do a Replace edit.

After, the new clip is in place, and the transitions stay properly positioned.

Replacing a Portion of a Clip
With Replace edit, we've looked at only one variation: replacing an entire Timeline clip. Instead, we may want to cut into a shot, or replace the head or tail of the shot. If you set in and out points in the Timeline, Final Cut will limit the edit to that section. Before edit 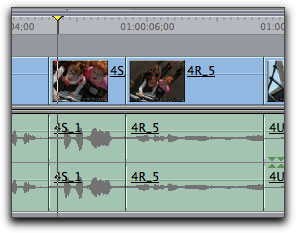 The Timeline and Viewer playheads will still be used to determine how the clip is edited in, but this time duration is handled differently.

Duration is always determined by the Timeline with Replace edit. In fact, setting any in or out points on the clip in the Viewer will never have an effect when using Replace edit. Final Cut ignores the Viewer marks completely. On the other hand, if there are any in and out points in the Timeline, then they will determine the duration and placement of the new clip. But if there's no in or out point in the Timeline, then replace edit uses the boundary of an entire clip under the playhead as we looked at earlier.

Tightening Up The Edit
When using a replace edit on a shot that has matching action with the previous or next Timeline clips, its also important to recognize that Replace edit is often just a good starting point, but a little more work may need to be done.

In the previous example, a dialogue scene, we replaced a portion of dialogue with a clip from a different angle. Because performances on set will naturally shift during the course of shooting, one shot's pacing will be different than another's. Because of this, after the replace edit, you may find that you've created a small shift in continuity or timing with the adjacent clips. In that case you can use the ripple tool on the head or tail of the shot you replaced to fix that continuity.

There are many more uses for Replace edit, but these are some great places to start. Hope you enjoy.