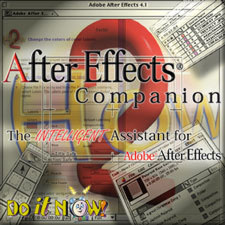 Final Cut Pro , as all members of this community are aware, is a powerful tool not only for video acquisition, editing and output, but also for compositing and motion graphics. CommotionDV, bundled with FCP, complements FCP with its rotoscoping, clone and video painting tools. But there are sometimes projects that call for compositing and motion graphics features beyond the capabilities of FCP. That is when many of us add Adobe After Effects to our production tool box.

After Effects can pose some very daunting challenges to new users. Even experienced users constantly find themselves needing tips or even needing to learn a new procedure while in mid project. A wealth of literature exists on After Effects beyond even Adobe's manual and Classroom In a Book. But they are all books. Usually big books.

But maybe your life is a little like mine. Ah er my desk is a mess. I am currently sitting in front of two 19" monitors, two computers, a pen tablet, a 13" NTSC monitor with S-VHS and DV decks sitting on top of it, my trusty Mackie, a casette deck, CD burner, DAT back-up, scanner, a couple of printers, and well you've got the picture. The last thing I need is to fumble with a manual or especially a well-crafted but bulky secondary application guide.

After Effects Companion comes to the rescue of all of us who undertake the challenge of first learning and then mastering the powerful complexities of Adobe After Effects. AE Companion is really the second in the mission:Learn Dynamic Media series, following the successful release of DV Companion for Final Cut Pro. Incidentally, readers should note that team leader Philip Hodgetts promptly releases updates to DV Companion subsequent to each FCP update. This attention to users should bode well for updates to After Effects Companion as Adobe continues its development of AE.

For those not familiar with DV Companion, AE Companion works in the identical manner. The Companions integrate with the Apple Help system and thus are accessible in one of three ways. The installer places an alias on the Desktop which the user can double-click. Or from the Finder; just select Help Center from the Help menu to display the Help Books installed on your system. Or use the Companions as you work because the Help system is always available from the Help Menu of After Effects (or FCP, depending upon which product you have purchased and installed).

In the words of the developers: "The After Effects Companion is about achieving outcomes. The 'Do It Now' design lets you achieve results now, without prior knowledge." I concur. While I do modestly admit to a more-than-cursory knowledge of After Effects, even following some of the more basic threads reinforced my knowledge while the more advanced techniques not only taught me a few things but also inspired a few creative thoughts.

Let's follow the flow of After Effects Companion to see what I mean. Pull down the Help menu within AE and click on After Effects Companion. The Help System launches and brings up an opening menu. Either type a question into the search box and make your selection from the hyperlinks found, listed in order of relevance. Or, click through the hyperlinks on the opening screen to find exactly where you need help.

AE Companion's How2's (just-in-time knowledge, in its own words) divide into four different levels: Strategies, Techniques, Tactics, and Tasks. A Strategy is an overview to provide a general direction. Tactics guide you with step-by-step instructions usually one a single page, which then can be printed. Tasks are accessed through a hyperlink usually beginning "Help me".

As an example, let's learn about Precomposing in After Effects (known in FCP as Nesting a Composition). If I were to type Precompose in the search box, AE Companion would return a screen to me with several possible links. Clicking on the hyperlink Help me precompose layers (Requires Quicktime to view this link) would bring up a QuickTime movie which would demonstrate the feature in a "do it with me" format, allowing me actually to perform the task as I watch the instructional movie. And, since the movie has a draggable progress indicator as well as controller buttons, it is possible to play all or part of that movie if you (like me) sometimes need to see it a few times in order to comprehend. Each movie then has at the bottom navigation buttons to go to the next panel where there are multiple panel movies as well as buttons to return either to After Effects or to the Companion.

An extensive Troubleshooting section allows access to solutions to immediate problems while a "jargon busting" section is of particular assistance not just to neophytes to compositing but to anyone who is new to our digital world.

After Effects derives a significant amount of its power from its extensible plug-in architecture. After Effects Companion references many of the third party plug-ins available and describes the functionality they add to AE. The treatment of the native AE plug-ins, though, ranks to me as one of the most commendable features of Companion. Techniques explore the use of each of the filters, many with interactive controls to see the effect of that filter upon a sample image. There are Tactics which go step-by-step through the creation of effects.

After Effects, of course, comes in two versions- Standard and Production. Note that the initial release of After Effects Companion details only the Standard version. Each of the additional functionalities included in the Production version is explained on one screen, but there are not How2's for those additional features. I would hope that future versions of Companion include specific help for those powerful yet intricate Production Bundle effects. I suspect that Adobe might have some surprises for us in the months to come and mission:Learn Dynamic Media might be ready to update at a moment's notice.

While the omission of the Production Bundle effects comes as a minor disappointment with the program, I offer an enthusiastic recommendation to all users of Adobe After Effects whatever your level of expertise: This is a must buy!

The mission: to learn Adobe After Effects.

Ned Soltz is Treasurer of the LAFCP Users group whose interest in digital video goes all the way back to the first Macintosh 840AV with DAV slot. He consults on all matters Macintosh.

(This article was originally published at LAFCPUG and is reprinted here with permission.)