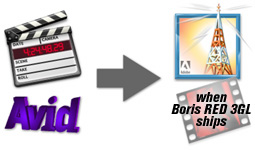 Within the last year, a local documentary-maker and acquaintance shot a documentary on HD. It was his plan to copy the HD master to DV to offline in Final Cut Pro 3 but to on-line on an Avid system. Everything went well until he took EDL's from FCP 3 to the Avid and began to capture the actual HD footage. His editor noticed that many of the EDL's were inaccurate. I don't know the details but what I do know is that they very quickly found a solution. Automatic Duck came to the rescue with its ASE (Automatic Sequence Export) module for FCP 3 and Avid's OMF capabilities. The OMF file which Automatic Duck exported to the Avid was absolutely precise, the editor could capture the exact footage and the Avid timeline contained exactly what had been on the FCP timeline.

This is one of no doubt many stories of how Automatic Duck has facilitated cross-application editing, compositing and finishing. Automatic Duck first produced a plug-in to allow movement of timelines between Avid and After Effects. With the OMF capabilities of FCP 3, the product was expanded to include export capabilities from FCP to Avid and After Effects, depending upon which version you purchased. The real story above represents the capability to transfer between FCP and Avid.

I had the opportunity to review Automatic Duck when it first shipped and much of the general observations and workflow remain the same as that initial review.

Automatic Duck has now been upgraded to Automatic Duck Pro Import 2.0 with increased capabilities and merger of multiple import filters for a variety of applications into one import plug-in. The result is that a sequence exported from Final Cut Pro 3 as well as Avid systems can be brought into After Effects or into an exciting new product which will be shipping in the near future, Boris Red 3GL. A new feature will benefit those who must work cross platform since there is now Windows capability. Yes, you can export your FCP sequence to AE for Windows.

With all of the combinations of import and export, as well as earlier versions of Automatic Duck products, let's pause a second and just understand what product offerings were available for FCP, what offerings are available with the release of Pro Import 2.0 and what we can expect to be seeing in the near future.

The initial FCP product was entitled Automatic Composition Import (ACI) for FCP. It consisted of two modules, the FCP ASE (automatic sequence export) plug-in and the Import module for After Effects. This is the subject of my earlier review which by now you have all committed to memory.

Pro Import 2.0 as of shipping date includes the same FCP 3 ASE plug-in (current version is 1.15) and the Pro Import Plug-Ins for After Effects (and it works in AE 6) and Boris Red 3GL, the forthcoming update to Boris Red. It will not work in the current version of Boris Red 2.5.

Note in the paragraph above that I specify the FCP 3 export module. Apple has not released the necessary XML support for FCP 4 which is needed for the new version of ACI. The release of XML support has been promised for the end of August, 2003. This may come as somewhat of a surprise to many FCP 4 users since Apple has marketed XML compatibility as one of the key features of the FCP 4 upgrade. The simple answer is that the XML capabilities of FCP 4 were not complete at shipping time and Apple chose to hold off until it was complete. So, for the few weeks between the release of ACI Pro 2.0 and the completion of XML, FCP users wishing to use Automatic Duck must continue to work in FCP 3.
Now, having been the bearer of bad news to potential users who want their XML, I can lighten your burden somewhat by reporting that Automatic Duck has in the wings Automatic Sequence Export (ASE) 2.0 for FCP 4. This will enable not only export to After Effects and Boris Red 3GL from FCP 4 but also, catch this Avid users, bi-directional capabilities with all Avid systems except, for the moment, AvidDS. That finally means that you can take your Avid sequence and export to FCP 4. Now, isn't that worth waiting a few weeks ?

For purposes of this review, I will only be considering export from FCP 3 to AE 6 but keep in mind that the same capabilities (and more) will be available from within FCP 4 shortly. I also must keep you in suspense about Boris 3GL other than to say that it has been announced.

Installation and Set Up
The Pro Import 2.0 image contains two sets of installer files, one for FCP 3 ASE and another for the two import modules, AE and Red3GL. The installation process can be a cumbersome one, installing the plug-ins and then launching each of the applications. After launching FCP and choosing Export -> Automatic Duck OMF option in FCP, no activation screen will appear. That is because beginning with version 2.0, the original ASE 1.15 is essentially free and what you are purchasing are the import modules. You may then proceed with your OMF export from FCP 3.

Again note that this will change with the release of ASE Pro 2.0 for FCP 4. This will require purchase of an upgrade to ASE Pro. Details may be found on the Automatic Duck web site. 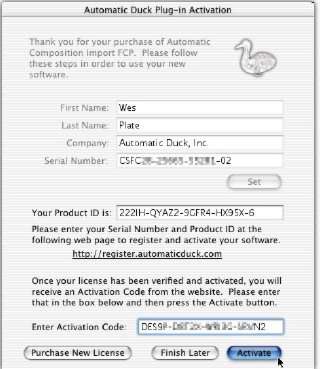 You must enter user name, company name and serial number, clicking "Set" to set a product ID code. Then, you must click the web link to connect to the internet, complete the registration code, and receive an activation key. It can be a little confusing and might produce an error message if names mismatch. Having received and pasted the activation key, you're ready to import your FCP 3 sequence.

Now the fun begins. Click Import and before you know it, your FCP sequence is now an Adobe After Effects composition. 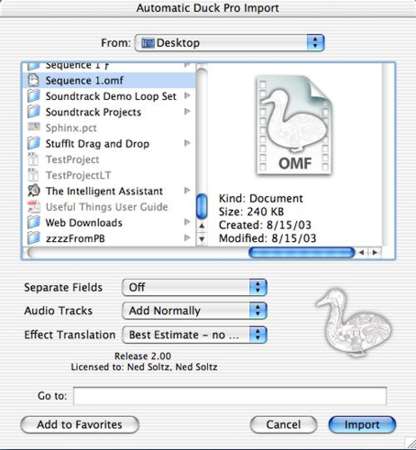 Specific Features and Limitations
ACI 2.0 now can translate audio keyframes from FCP into AE. Combined with the enhanced audio capabilities of AE 6, this can be a welcomed new feature for many FCP users.

Most of the new features of ACI 2.0 are in the Avid world. Among the effects which ACI 2.0 can import from Avid are PIP, 3D PIP, 3D Warp, Superimpose and Resize. AAF import support is also added.
Currently, ASE Export/ACI 2 import supports the following from FCP 3:

Audio Keyframes
You may not export/import filters, transitions, text generators or other effects. However, just as in the earlier version (you remember, of course, all of the copy and visuals of that review), ACI will create a placeholder in AE and indicate the missing element which can then be re-created in AE.

Impressions and Recommendations
If you work between FCP and AE or Red 3GL, Automatic Duck Pro Import 2.0 is a must have. It does one thing and it does it fast, it does it well, and it does it with accuracy. Yes, you can export a reference movie or even a self-contained movie to AE, but then you are working with an entire file rather than with your entire timeline. Let's face it. There are some things that AE does which you can't do in FCP. That's the way it is supposed to be. FCP is an editor with compositing capabilities. AE is a compositing and motion graphics application. There is a difference. In fact, if you work with Avid and need to move to After Effects, then the product is equally as necessary.

There is a major limitation at time of release and this is within the control of Apple rather than Automatic Duck. The absence of complete implementation of XML support within FCP 4 means that you must work with FCP 3 for the very short term. Some users might choose to wait to purchase or to upgrade until this is resolved. For others, the importance of translating timelines to AE is so significant that working in FCP 3 presents little problem. After all, the purpose here is merely to create a timeline with minimal effects simply to move that timeline into AE for finishing. FCP 3 is by no means inadequate to that task. And, to repeat, it is only a temporary work-around.

Interchangeability and interoperability are the key words here. The product does what its developers claim it does. The promise of even greater FCP 4 functionality and bi-directional Avid capabilities are exciting. If you need to move entire sequences and timelines out of FCP for finishing in a dedicated compositing/motion graphics application, you can purchase Automatic Duck Pro Import 2.0 with complete confidence. In fact, if you fit in this category, you cannot even conceive of not owning it.

Available for purchase at the lafcpug Store

Ned J. Soltz   Ned Soltz is passionate about the uses of technology to enhance the creative process. He only wishes that he were more creative. Now that he has a mobile FCP studio on his Powerbook G4, you can catch him on the road at nsoltz@aol.com [Top]