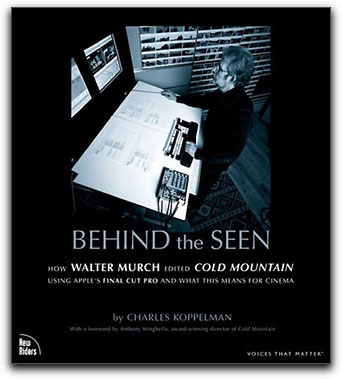 
I love a good book but alas, over the past four years, almost all of the books that I have read were technical books, mostly about FCP. Well, okay, this book is about FCP too, but it's not a 'tech book', it's an adventure story of brave souls who strike out into new territory, beyond the cutting edge, beyond the point of reason. This book tells the story of a journey, a journey on a road never traveled before. It is a suspenseful story filled with twists, turns and obstacles, the outcome, not always certain. It's a thriller but don't look for this book in the Fiction section at your local book store. Let me explain.

In 2002, Walter Murch, three time Academy Award-winning editor, (Apocalypse Now for Sound editing and The English Patient for both Sound editing and for Film editing), accepted the job as Editor on the movie 'Cold mountain', written and directed by Anthony Minghella (The English Patient, and The Talented Mr. Ripley). This arrangement would not be unusual except for the fact that Walter Murch planned to edit this eighty million dollar production using Apple's Final Cut Pro video editing software and FCP had never been used in a movie of this size before. Oh, and just to keep things interesting, the movie was being shot and much of it edited in Romania.

Behind the Seen was written by author and director Charles Koppelman (the independent feature film Dumbarton Bridge and award-winning documentaries). It is obvious that Charles is a story teller as this book is laid out like a 'mystery/thriller' movie. The book starts out near the end of the story where we see the precarious position our heros are in. Then we are moved to the start of the story with the knowledge that this truly is an adventure story.

The 'Behind the Seen' story really is a web of subplots with twists and turns, and a cast of major players from both the film industry and Apple Computer (Steve Jobs and the FCP team). It is told to us, not only as narration, but with numerous interviews, photos, journals and emails between the different parties, which add to the depth of the story and give the reader real insight into Walter Murch's efforts to cut Cold Mountain on Final Cut Pro and the seemingly insurmountable problems that he faced. Charles Koppelman tells the story, not as an observer, but more as a participant. This has the effect of putting the reader into the story, very much like we were there, during the unfolding of this saga.

As I said, I love a good book and this book is, as they say, a page turner. As this story lives in our FCP universe, it makes everything very personal and very real.

Available for purchase in the lafcpug Store