Panasonic P2 Workflow with Final Cut Pro and the HVX200 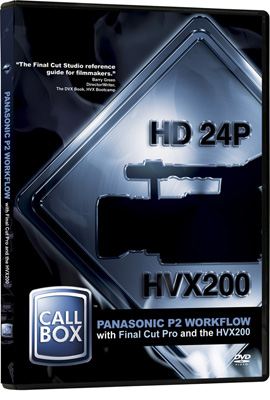 
This DVD is a step-by-step primer on managing p2 card DVCProHD footage acquired with the HVX200 from pre-production through post to archival. But it doesn't stop there. Color correction, HVX200 hardware and software peripherals, metadata management, SD DVD authoring and more are examined ­ all in a fast-paced, never miss-a-beat presentation. Over two hours of instructional content and "real world" tips are distilled into workflow topics specific to p2-based "data centric" acquisition, use, and archival. While the DVD includes Final Cut Studio specific tutorials, most of the information is useful to both sides of the aisle.

The DVD is narrated by Noah Kadner, an Apple Certified Instructor, videographer, director, and host at various web sites for professional video users including 2-pop and dvxuser, among others. HVX200 basic capabilities are introduced, but the disc is not intended as a primer on using the cam. Instead, Kadner provides "soup to nuts" alternatives to managing p2 card data depending on your production setting. General topics include an overview of the cam and p2 data technology, production and post production strategies, and advanced workflows that evaluate specific software and hardware generic to the HVX200. 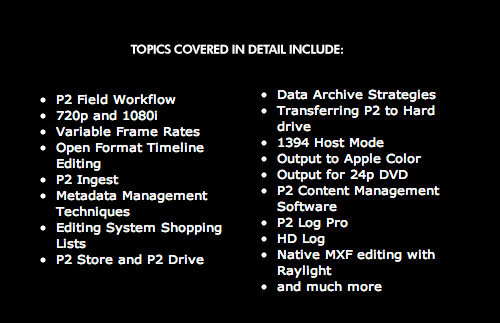 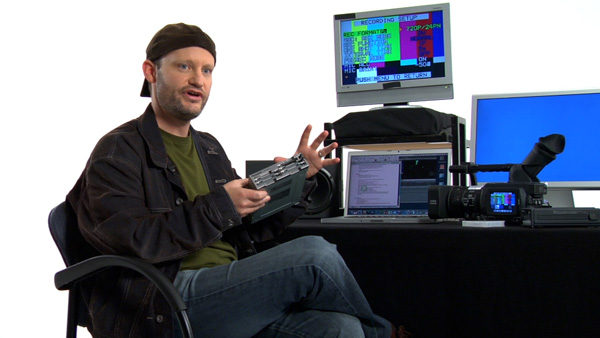 As I stated, the DVD is geared in part to demonstrating specific Final Cut Studio 2 workflows for HVX200 footage. These demonstrations are detailed and comprehensive. They include electing the correct FCP "easy setup" for 720p and 1080i sequence/timelines, removing pulldown for 1080i/24pa footage, use of the FCP modal dialog box for log and transfer ingest of p2 data, open format timelines, and using the media manager to efficiently archive finished projects for future editing. Kadner also demonstrates native MXF editing using dvfilm's Raylight for the Macintosh, and capturing directly into Final Cut Pro via firewire. Other sections deal with the Firestore FS-100 from Focus Enhancements, loading meta data to camera and cards with p2 Log Pro and HD Log. A thorough discussion of the functionality of Panasonic's p2 management software for the Macintosh is provided. 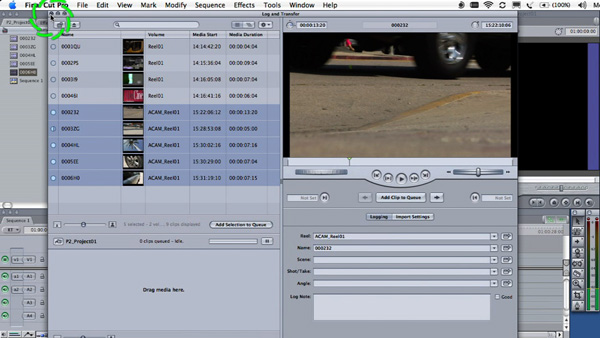 The remaining topics pertain to Macintosh-based post production. They include the necessary steps to create a SD DVD from DVCProHD footage including encoding choices in Compressor and workflow in DVD Studio Pro. Kadner also briefly introduces the capabilities of Color, Apple's high-end color correction application that is bundled with Final Cut Pro Studio 2. Note that the Callbox offers a separate DVD that details the capabilities of Color. (Digital Color Correction - The Final Cut Studio Workflow with Apple's Color - $75.00). No information is provided on authoring either blu ray DVDs in CS3 Encore or HD DVD discs with red laser dye DVDs in DVD Studio Pro, however.

Kadner's narrative is easy-going and informal. The workflow suggestions are based on what has worked for him in using the HVX200 and p2 card data since the cam was introduced. As I stated, while the DVD has a decided Final Cut Pro bend, the tips, suggestions, explanations and examples apply with equal force to any editing application or production environment. The information is useful and the price is a value.


[Top]
This article first appeared on lafcpug and is reprinted here with permission.