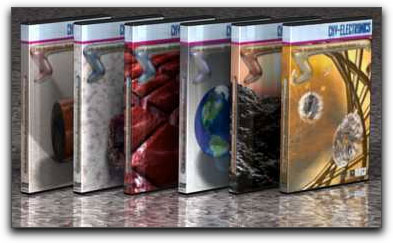 
Back in September 2004 I reviewed Christopher Vonrhein's first set of 3 discs of animations from CHV. They were of high quality, relatively inexpensive and useful in a number of different applications. Now Christopher has brought forth a second set of animations, each with its own theme, at a cost of only $79.00 per disc or, less expensively, as part of a bundle. 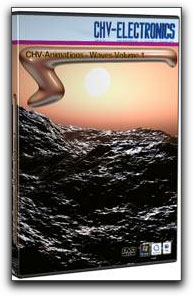 The first new set to intrigue me is his "Waves Vol. 1". This is a great collection of 40 water/ocean scenes under a variety of conditions. Each one lasts between 12 and 15 seconds, which provides enough time for you to fade into or out of, or place text upon. If looping is required, they will do that just fine. Some animations use peaceful moons or skies overlooking a gentle set of waves lapping at the shore while others have a bob and weave to them that will succeed in making you seasick. But hey, realism can be important. Still other animations in this set are placed underneath the water, which gives you a pretty good feel for the action of being down beneath the sea. 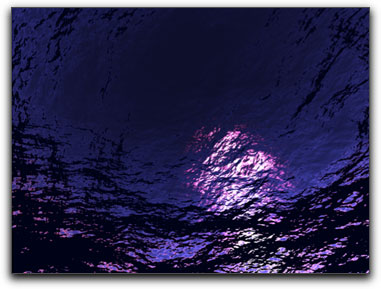 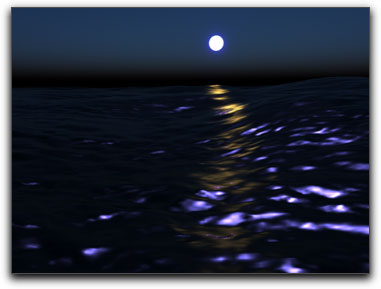 Most of the camera eye is pretty stationary so there is not a whole lot of east/west or north/south movement, however there is good use of wave action from a gentle current to stormy seas. In addition, some of these animations look as if Christoph had been imagining alien landscapes where double moons and eerie red seas are the norm. I am very familiar with how Christoph made these animations and I know that they are incredibly time consuming to make and render. Each one is created using Polygonal modeling to provide a very real and lifelike environment. One thing missing are the white caps frequently seen on choppy water. This, however, is a limitation of the software that Christoph uses to create these wave scenes. A large set like this, filled with 40 different scenarios, is worth its weight in gold and time saved. Looking forward to Waves Vol. 2. 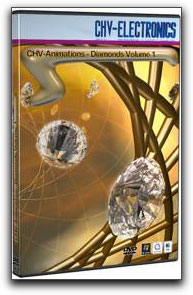 The second set of animations is entitled 'Diamonds Vol. 1' and is a must have for any wedding videographer/editor. This set contains over 2.5 gigs of animated clips and high-resolution tiff images featuring Marilyn Monroe's best friend, Diamonds. Forty clips are supplied with 38 of them looping. For those in need of some diverse ways to use a diamond as a centerpiece, CHV has some novel approaches which can be seen on the CHV website as opposed to the static shot I present to you here. Christoph has every conceivable shot here; from diamonds falling from the sky, floating through the air, diamond ring close-ups to diamonds draped over the Xmas tree. While this set of animations is fully intended as 'background', several of them would be even better served had alpha channels been provided as well. Alas! 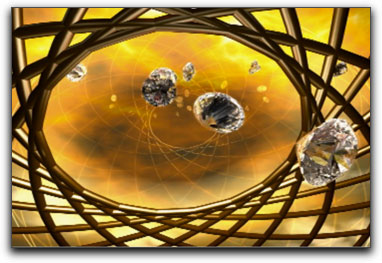 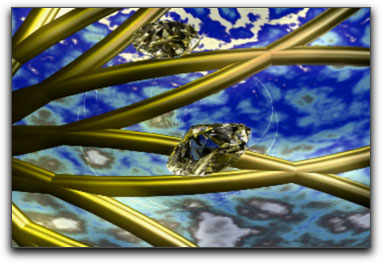 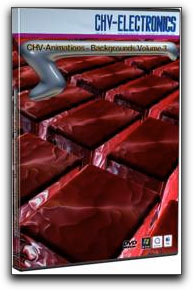 The third set is just that, Background Animations Vol 3. This is a collection of some very unique background shots. Forty clips come on this disc, all of them with looping ability. Many of them seem to be right at home in another time dimension featuring twirling, flexible swirls that draw you in, imagine falling into the warp time continuum. Others utilize 3D numbers, embryonic web casings and spiked geometrics. This is a regular Rorschach test of the videonic mind. 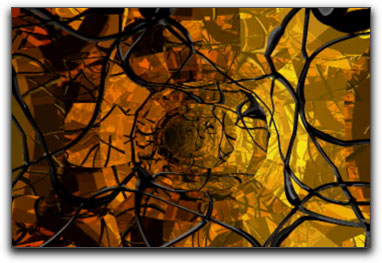 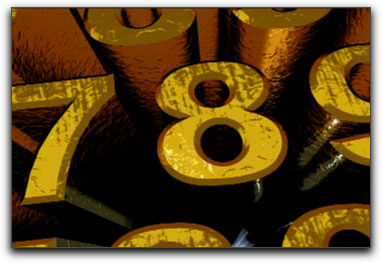 CHV animations are sharply produced, loop well and have a useful and specific purpose. All three sets come with plenty of high resolution still tiff images. You also have the choice between NTSC and Pal animations.

All in all, this, the second collection of animations produced by Christoph Vonrheim and CHV, is an even stronger set than the first set produced last fall. While you may never use some of the animations on these discs, if even one of them fits the bill for that high paying project, than the discs will have paid for themselves. I have always believed that it is better to have and not need than to need and not have. I have found several I look forward to incorporating and I am glad to have them.