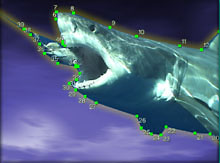 CHV continues to produce unique twists on many of the standard filters and transitions we have grown accustomed to using as well as some really exciting new variations. and useful plug ins for the Final Cut Pro community. One of their latest is the new Bezier Garbage mattes, guaranteed to provide just the right amount of points to work with for even the most demanding editor. Providing 5, 10, 12, 20 and 40 point mattes, the FCP editor is no longer stuck with the frequently inadequate 4 and 8 point maps which come included in FCP

Even more valuable is that each matte provides bezier handles for all points within the mattes. The problem facing editors previously is that while using a garbage mattes might provide enough points, the lines between these points are straight. Now it is possible to accommodate all the curves your heart desires. CHV provides the FCP editor with bezier handles which are easily adjusted both before and after the individual point. This makes it much easier to follow the curved path of almost any object. At first, when I tried to grab the handles like one does using motion paths in FCP or Photoshop, I was stymied by my inability to do so. Instead of grabbing handles CHV uses colored crosses which can be clicked on, grabbed and moved around. The straight lines set by the points will now bend and curve the handles to fit the object. I found that this took a bit of practise to be precise but one gets the hang of it fairly quickly. These crosses can be color coded to meet the editors preferences and offer all the flexibility one could look for. All points can be disabled as needed allowing you to have any matte filter from 5 to 40 points.

Another fine feature is CHV's use of a zoom window which pops up in the canvas as you are setting your points. This window can be adjusted in size and I found it to be a real plus for getting that spot on precision while setting the point exactly where you want it.

Built into each filter is the choice to generate either a matte or an outline of your subject. You can get very creative with your outlines by determining not just the width and color of the outline but by also making that outline glow. This feature can be very useful in product placement for commercials where you need to have that product really stand out in the scene, or for any number of special effects. As you can see , my matted radioactive shark is still roaming the seas. Note that I haven't removed the points as yet. The point labels can be adjusted to size or disengaged entirely. This also applies to the bezier handles which are also color coded, red and blue depending upon the side of the point you are adjusting as well as a white outline which may be applied. All color coding may be changed according to your preferences. Important to note that the longer the distance you place between points the more flexibility you gain when using the bezier handles. All points are keyframeable enabling smooth animations. In the example below, I matted the shark from a clip I had filmed and overlayed it upon suitable background. Don't ask me why I made it radioactive, just having some fun here. 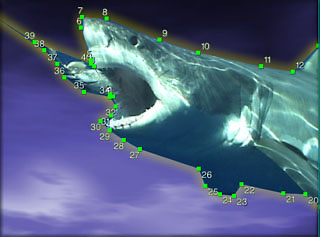 There are a diversity of other controls supplied with each filter; the ability to feather and tint, adjust opacity, define and color either the inside or outside of your borders, invert your matte and adjust its position as well as the aspect ratio within the screen all add to the flexibility.

In this example I have a still of a turtle taken from a video clip shot in Papua New Guinea, below left. This next shot is of the turtle isolated from the background with the points and handles still in evidence, below right.

Now overlayed on a different background wt points and handles in evidence, below left. And finally the finished product, below right.

Unlike CHV's other fine filters and transitions which have always applied themselves flawlessly on my DP 800 with a full gig of ram, I found that using these mattes frequently brought up the Mac's spinning colored wheel while it completed whatever adjustments I was making. At first I thought there might be an install problem so I dumped the plug ins and did a reinstall. However, every so often, it continues to rear its head. Rendering of these mattes was thankfully quick and painless.

The cost for these plug ins is just as painless. Only $49 for the Pro version which includes 5, 10, 20 and 40 point mattes and the light version which is a 12 point matte for $39. These plug ins are easy to use, pragmatic and useful to any editor and well worth the money. With just a little practice you can become a master at matting any curve within Final Cut Pro. Enjoy!!

Steve Douglas had been an underwater videographer and contributer to numerous film festivals around the world. The winner of the 1999 Pacific Coast Underwater Film Competition, Steve has also worked on the feature film "The Deep Blue Sea" and is one of the primary organizers of the San Diego UnderSea Film Festival. He has used Final Cut Pro since its inception and has taught film production classes for many students with the San Diego City Schools.