Christoph Vorhein and CHV Electronics has long been at the forefront of creating high quality and inexpensive plug-ins and animations for Final Cut Pro going back to, at least, Final Cut Pro Version 2.0. Now we are again treated to Christoph's latest contributions to the Final Cut Pro community with two small collections of plug-ins, the Magic 3D FX and the Morphing FX sets. Both bundles utilize the newest FX plug-in architecture from Apple, which allows for higher render speeds and better system compatibility. Having been introduced with Apple's Motion 2, it is now also available for Final Cut Pro 5.1.2.

The Magic 3D FX set consists of three individual plug-ins. Unlike regular plug ins which are simply dropped into your Final Cut Pro plug-ins folder, the FxPlug sets install in your /Library/Plug-ins/FxPlug folder on your hard drive. The first of these three plug-ins is the Matrix 3D which enables you to create a grid of up to 40 different video clips on it. It was easy to set up and use. In fact, I was playing with the possibilities for so long that I missed the first quarter of the Chargers winning football game. My how time flies! There are literally hundreds of different grid variations you can create and, while I only experimented with 5-7 different clips, there are countless ideas that one can come up with when utilizing the Matrix 3D plug-in. The plug-in also comes with the ability to create waves from both from side to side and from back to front. The short owners manual explains everything clearly but this plug-in is fairly intuitive and reference to it came as only an after thought. 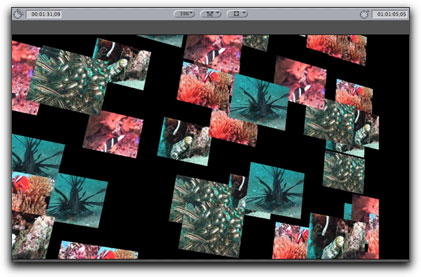 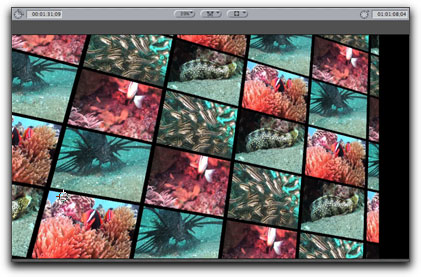 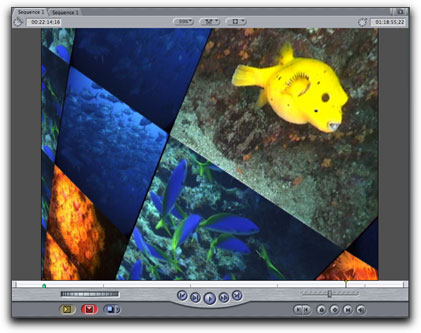 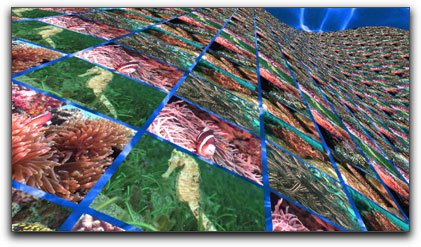 Your imagination pays off well with the Matrix 3D. Note how in the fourth picture, the image can be placed over another matte, gradient or animation.

The second effect in this set is the filmstrip plug-in which has a myriad number of uses while placing up to 4 separate clips in the wells. Size, side textures, movement relating to a variety of twists and turns and adjustments of the X, Y and Z axis can adjust all these filmstrips. The ease of use remains consistent and the rendering time of the default 10-second clip was roughly 4 minutes on my DP G5, 2 gigs of ram and the Radeon 9800 Pro graphics card. 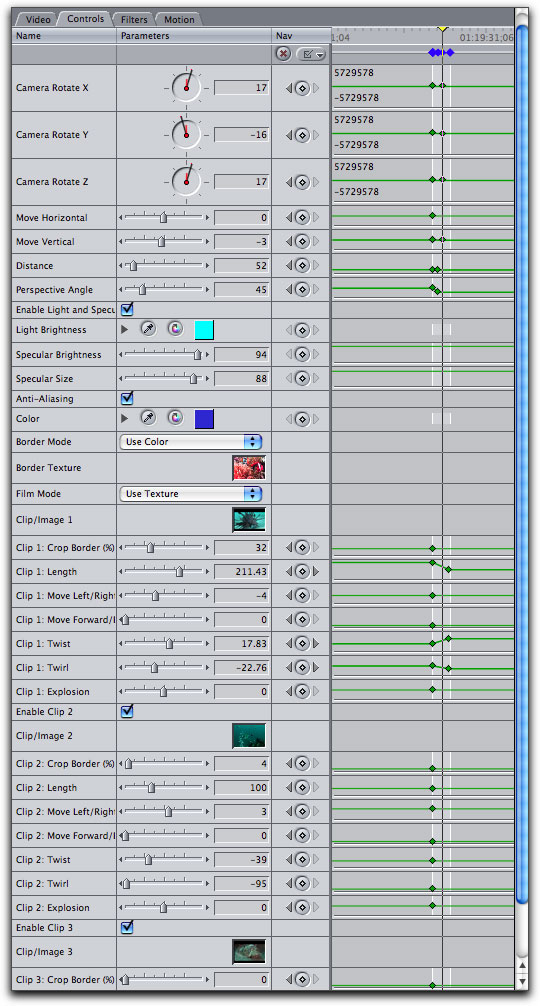 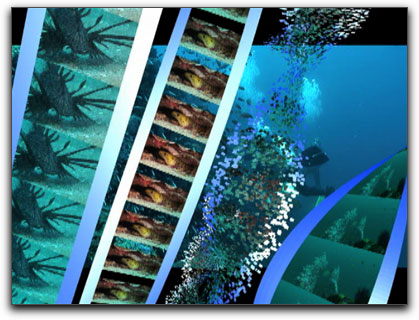 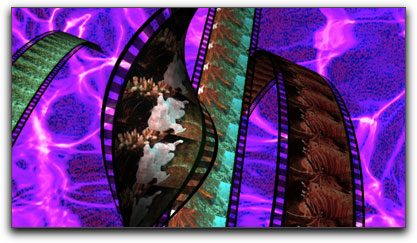 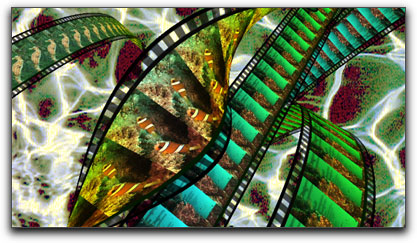 Have your strips twist, curl or explode. It's up to you and easy to do.

The last FX plug-in in the Magic 3D collection is the Cube FX and the sky is the limit in terms of what you and your cube can do. A video well is there for each side, top and bottom. Spin it, turn it on any axis or bring the sides together or apart; it's your decision and not difficult to do. With any of the Magic 3D Fx plug-ins you will, unfortunately, not be able to place text into the video wells. To do so will freeze up the plug in which will un-freeze the moment you clear the well of text. This happens when you place any video generator into an image well. As was explained to me, "This is not a fault of the plug-in itself. It's a problem of FCP". If you put a video generator into an image well, the plug-in won't even be executed anymore..... And without being executed, the plug-in can't do a thing... which is why everything will freeze up. Apple already has said: "SOME Fx plug-ins will work with FCP 5.1.2". There are also some functions of the plug-in interface missing, that are working perfectly with Motion, but not at all with FCP." 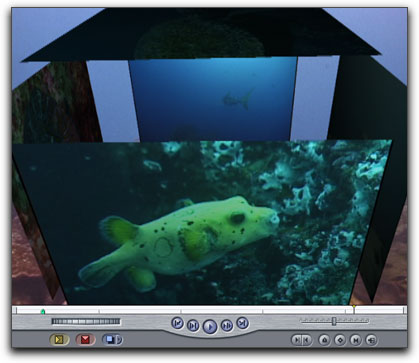 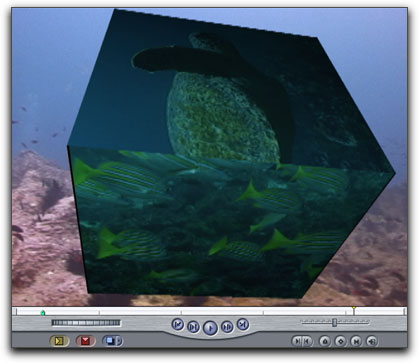 You can spend a lot of time just deciding which clips should go in which well. Either way, it's fun to use.

The second set of CHV FX Plug-ins consist of two separate Morphing tools, one is the Morph plug-in and the other the Deform Fx. Deform makes it possible to distort stills and video clips by taking advantage of Final Cut Pro's new Fx plug-in interface structure. Both plug-ins in the Morphing Fx package are fully capable of running in real-time without the need to wait for rendering. While both can be found in the Final Cut Pro effects bin, as of this writing, they will only be able to work in Motion 2. Transparency is fully supported so that you will be able to distort images without an active alpha-channel. The Deform plug in can be applied to both stills and video with the easy to follow manual. It is a bit funky for my tastes but would probably be just the thing for someone wanting to make a Halloween video or the next installment of Nightmare on Elm Street, Part 14, 'The Final Finale'. 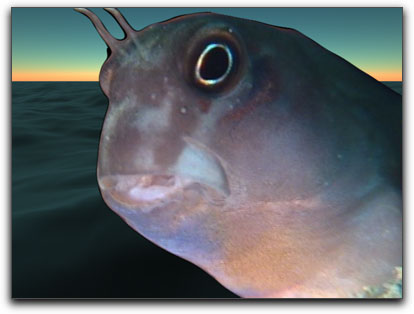 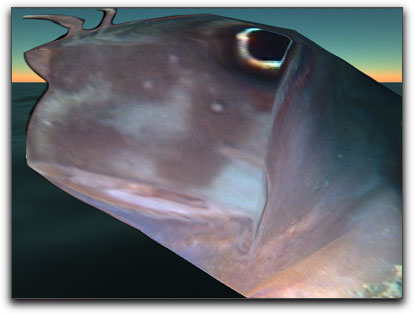 Turning a cute little blennie into something warped. Just plain weird if you ask me. 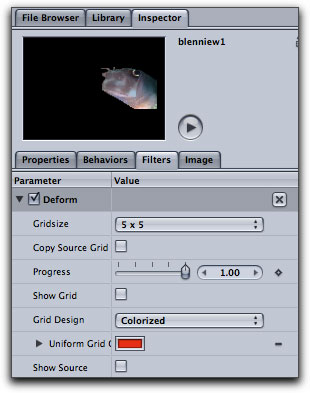 A simple set of parameter controls allows you to
bend, shape and manipulate your images or video clips all retaining their transparency.

The Morphing Fx plug-in will surely be of greater use enabling you to morph faces into other faces, buildings into other buildings or animals into other animals. This new version is made easier to apply and check through the use of the progress bar, which demonstrates the current morph and easily enables you to clearly see any places or points that need tweaking. After setting your source and destination clips or stills you must apply points to the destination clip in a similar way as those you applied on the source clip. It is time consuming and I wish there were a better way to recall which points from the source clip should be applied to the destination clip. This is especially so when you have chosen a larger grid size to work with depending upon the complexity of the image to be morphed. I repeatedly had to shift back to the source to recall where it should be placed on the destination. By the time you read this, marker numbers will be available in a free update and this should certainly help my senile memory. Never the less, it all worked just great and I wish I had had this plug in last year when I was working on a project that demanded a critical morphing sequence. 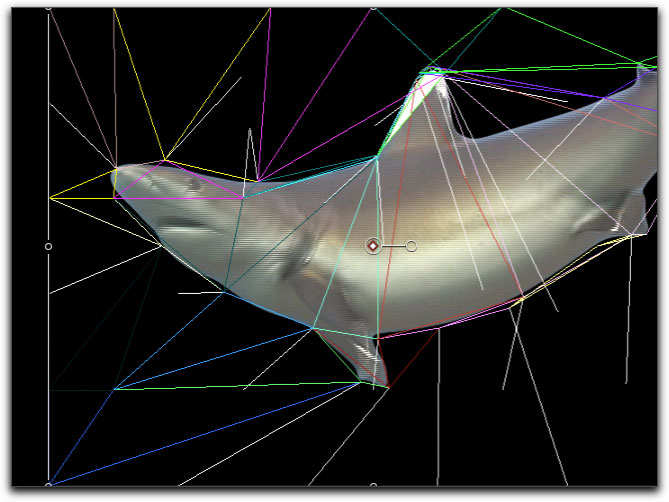 My final destination clip with points applied.
The progress bar in the parameters control really helped a lot when tweaking the final morph.

And finally a plug in that I couldn't resist mentioning. Who doesn't enjoy something for free and this plug-in is just that...Free to all. Christoph Vorhein has been offering a free plug in here and there ever since I first discovered CHV Electronics and here is one that I do look forward to using. He calls it the Towers of Film and that's just what it is. The plug in creates small cities of buildings of varying heights, quantities and angles for viewing. Just place as many clips as you want into the many video or still wells. You can fully adjust the camera angle so that it is looking down from on high as if coming down to a planet and sweep the camera in onto a city of up to 40 film clips. If you want 500 or more buildings, you've got it. Only want a few, you have them too. Want to look down, up; sideways...this easy to use plug in is loaded with features. It is more than worth its price...Oh that's right, did I say FREE? 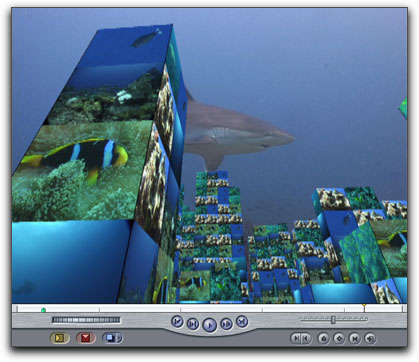 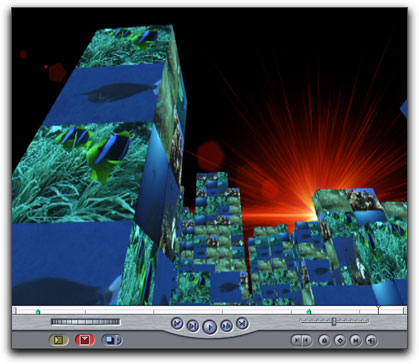 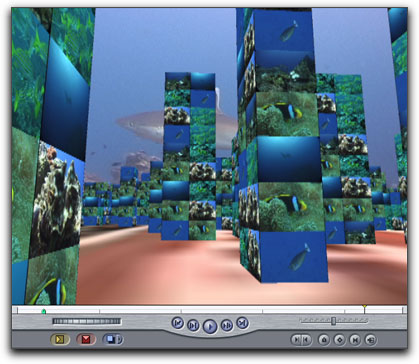 A feature I usually like to point out when reviewing plug-ins and applications is the availability of a number of free tutorials on the companies website so that the user can hit the ground running when first they purchase. CHV Electronics has always been great at supplying on line tutorials for the user of any of their plug- in packages. Their newly designed website is easy to navigate and is user friendly. This is a boon especially to the new editor who is still trying to figure out the steps to take and the terminology that goes with it. CHV through the years has also always offered free upgrades for any of their plug-in sets.

With my bottom line time having just arrived, there is not much I can say that I haven't already. First, these plug ins work and work well, second, they can all be quite useful in many types of projects (even the deform plug in could be fun) and third, they produce high quality results and are inexpensive for the editor on a budget. I think it is a fair assumption that the purchaser of these exciting plug-ins has little chance of ever having buyer's remorse. I don't.