In September of last year, Avid came to town to unveil version 3 of its dv-only editing software, the Avid Xpress DV. (Not so coincidentally, it was first introduced in Los Angeles at the L.A. Final Cut Pro User's Group) Aside from the presentation being highly ironic, Avid clearly revealed their hand that the market Apple helped create (namely, low cost dv editing) was a viable and growing market they too could compete in. Their answer was a $1600 editing package that save a few minor features (and the fact that it only works with dv material), is a full-blown Avid.

Now it's January, and Apple answers back with it's own dv-only editing package that for all intents and purposes, is Final Cut Pro, minus the Pro. At first glance, Final Cut Express looks just like it's big brother. In fact, if it weren't for a few minor changes to the interface, you would never know you weren't looking at Final Cut Pro. Let me say this up front. I completed a project in Final Cut Express and aside from the fact that I was missing a few compositing tools, I completely forgot I was working in a "consumer application".

Looking under the hood so to speak, is where you'll find the sweeping differences. Starting with the Final Cut Express menu, you will notice that Audio/Video settings have been removed. In it's place is an easy setup window that will make it a snap for someone with a DV camcorder to choose the proper settings. One of the continuing complaints of new users to Final Cut Pro is the sometimes bewildering set of options for setting up your hardware. Granted, the Audio/Video panel greatly simplified this in version 3 of FCP, but Apple went one step further in making Express almost idiot proof. 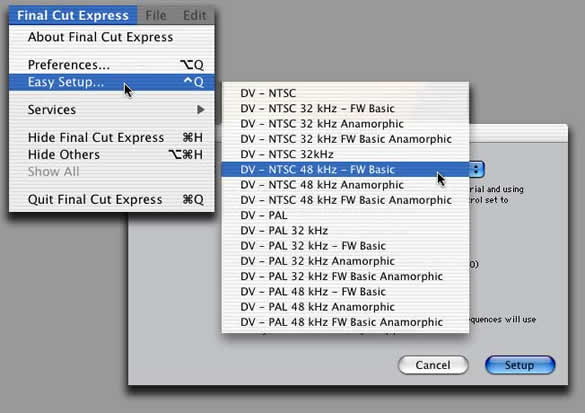 You'll also find some differences in the capture window. For example, Express will not allow you to log and batch capture multiple clips into your browser. Your only choice is to enter in and out points for a single clip on the tape then click the "capture clip" button to capture and add it to your browser. Because of this, most people will probably use the "capture now" button which will allow capturing from any point on a source tape then use DV Start/Stop detection to create individual browser clips. There is a completely new button called "capture project," that will, in effect, capture everything related to a given project. For example, if you've deleted all your media, and saved the project file, all you need to do to bring everything back online is click this button and Final Cut Express will capture all footage needed to reconstitute your project including all bins and sequences.

Finally, choosing between real time output to your Mac monitor and non-real time output to your camcorder monitor has been greatly simplified by the addition of clearly labeled menu choices. And speaking of real time, as long as you are using an approved Mac for real time playback, you will be treated to all the same real time transitions and video layers Final Cut Pro users are accustomed to.

When opening a project for the first time Final Cut Express creates a default timeline with 2 video tracks and 4 audio tracks but the familiar 99 tracks of either can be added in the same ways they are added in Final Cut Pro. As for trimming your clips, the tool palette has been left completely intact with all its familiar trimming icons, and Apple wisely decided to leave the trim window intact as well. The only thing that is missing on the timeline is the keyframe overlay button which allows you to view your filter and motion property keyframes beneath your clips. 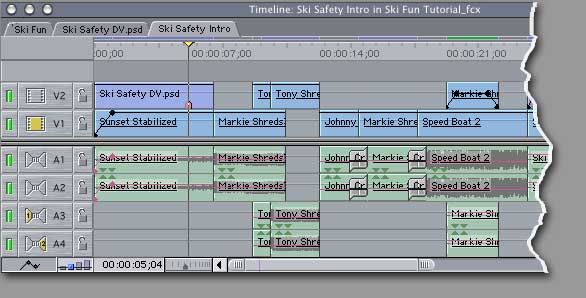 The browser layout has also been defaulted to the large icon view rather than list view which makes it easier for folks coming from the iMovie camp to view their clips as thumbnails the way they currently view them in the iMovie shelf. 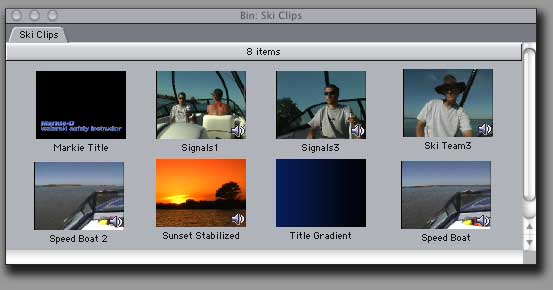 Once a clip is loaded into the viewer, a clip can be marked in all the familiar ways using a combination of contextual menus and keyboard shortcuts. What's missing from this window however, is timecode. The current time field only displays time in relation to the absolute length of a clip beginning at zero. 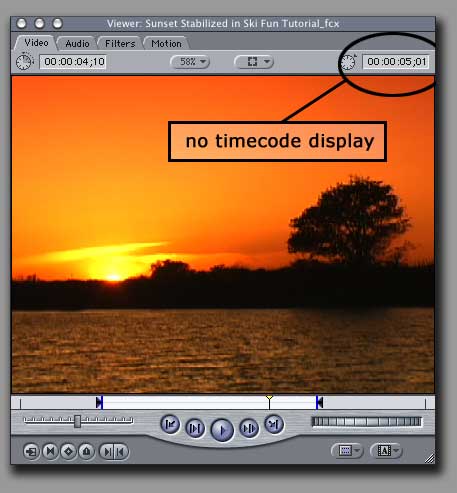 But again, considering that Apple is targeting consumers who will be outputting their projects right back onto dv tape, timecode is largely irrelevant. Here's the good news; when you capture your clips from a dv camcorder, timecode is still being captured even though Final Cut Express will not display it anywhere. This means you can open a Final Cut Express project in Final Cut Pro and all timecode will "magically" appear in the viewer.

If you click on the audio tab you will also notice a missing item - the keyframe button. You can still keyframe your audio levels, however you must use the pen tool. And speaking of keyframe buttons, they are non-existent in the filters and motion tabs. This of course means you will not be able to set individual keyframes for either filter or motion properties from the viewer window. 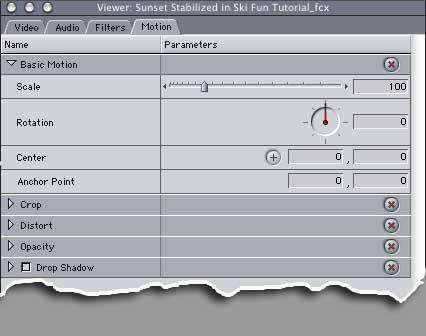 If you plan on doing a lot of animation or compositing, you will find the tools in Express lacking. In my opinion, this is the biggest difference between Final Cut Pro and Express. This does not mean however, that you cannot animate your clips at all. All animations must be executed from the canvas window using image + wireframe and the keyframe button. Using the keyframe button on the canvas will only set global keyframe values for all properties found in the motion tab including scale, rotation, center point etc. After animating a layered Photoshop file, I found that this greatly simplified the approach to animation for beginners by not giving them too many options, but it also made it difficult to tweak my animation after I created it - which is kind of the point I guess. 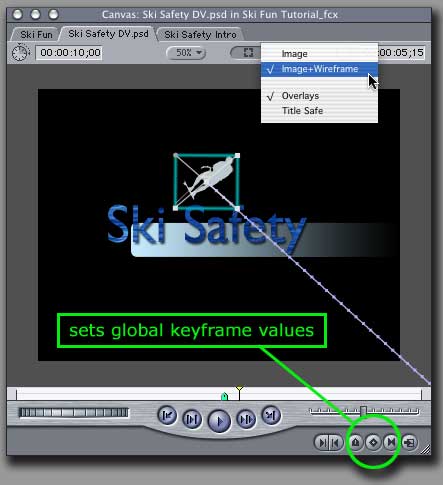 As for filters and title generators, Apple did not skimp and you have the full compliment of filters and generators that Final Cut Pro users enjoy with one notable exception; the 3-way color corrector has been pulled. In addition, supplemental color enhancement tools such as the video scopes, and the range checking tools are gone as well. If you want to color correct your footage you can still do so using the basic color correction filter that was introduced in version 3 of Final Cut Pro. However, unlike the 3-way color corrector, it is not a real time filter. As for titles, Apple included the popular Boris Calligraphy title generators for creating both 3D and scrolling type. But again, you will not be able to animate any title properties due to lack of keyframe provisioning in the viewer window.

In terms of compositing you can still work with 99 layers of video, however the "Nest Items" command is conspicuously missing from the sequence menu. Does this mean you cannot nest? No, it just means you will have to nest your sequences manually by first creating a sequence in the browser, then dragging it into an existing sequence. You can also add your favorite composite modes to your video layers as well as adjust the speed of your clips using the same methods familiar to Final Cut Pro users.

Thankfully, the Voice Over tool was also inherited from it's more mature sibling, but moved to the file menu since there is no Tools menu in Final Cut Express. And one more thing. There is no media manager. This was one of those "pro" features that Apple, for obvious reasons decided should remain with their flagship editing product to further delineate these products. And since there's no media manager, there's no reason to capture clips in offline RT mode and so it too, was left out.

So what do I think of Final Cut Express? To be frank, in terms of look, feel, and operation, it is no different than working with Final Cut Pro save the lack of tape logging, keyframing, and media management features. And considering the price, it will make it even more difficult for Avid (or anyone else for that matter) to compete in a market that is already dominated by the Apple and Final Cut Pro faithful. If I had any complaint it's that Final Cut Express is too much like Final Cut Pro and I wonder if Apple won't be competing with itself considering the fact that from my experience, the current user base are dv users that really don't do much compositing or animation in the first place. But this is certainly not a complaint as much as an observation of the realities of the current non-linear editing marketplace. And hopefully Apple will continue to build on the tremendous success it has had with Final Cut Pro and introduce legions more dv users to the wonderful world of Final Cut.

This article was originally published at Ripple Training and is reprinted here with permission.
All screen captures, images, and textual references are the property and trademark of their creators/owners/publishers.