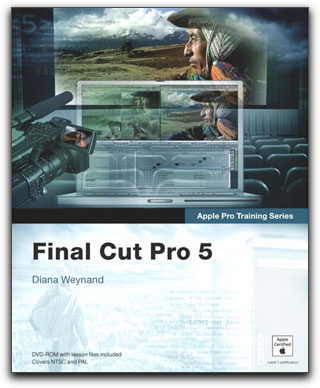 
This book, addressed to the beginner through advanced user, is typical of all the Apple Pro training series. It is of the highest quality in its preparation for the Final Cut editor to jump into the ocean of Pro 5 possibilities. If one chose to become certified as an Apple Final Cut Pro expert, this is the text that would be used in the official curriculum program at an Apple Authorized Training Center. As is the case with all the Apple Pro Training Series books, Peachpit Press has not scrimped on the quality of the paper used, or the color and image reproductions found within. Each of the several hundred, if not thousands of graphics and illustrations seem to pop out at you with their brightness making their usage both easy and a pleasure. Squinting to see just what the graphic is representing is unnecessary as all are clear and precise in their representations. Having written the Final Cut Pro HD tome, Diana Weynand, it seems, decided not to simply update that to the version 5 book, but took a different route. Though much of the text is the same, Ms. Weynand chose to use wholly different media to illustrate the many projects that lead the reader and demonstrate, not just the inner workings of this fine application but also, the many new features to be found in Final Cut Pro 5.

While this book, like all I have read coming from Peachpit Press, is fairly self-pacing from individual project to project, I found myself jumping around from one chapter to another trying out different techniques and methods to do this and that. Instructions are clear and sequential and the media supplied on a DVD disc accompanying the book is of excellent quality. The media on the disc is sizeable coming in at 7.76 GB and is divided into 16 separate lessons which draw from another media folder containing subfolders for render files, music video, graphics, exports and video footage which was very professionally shot. In order to complete the projects along with the book you must first copy over the disc's contents onto your hard drive. It didn't take long and presented no problems. Found at the end of each chapter is a brief and useful quiz. This serves as a wonderful way to review and summarize what has been covered in that chapter before moving on to more demanding tasks. I like this feature in that it provides a confirmation to the user of what they have learned. For each question, answers are supplied of course so ...... no peeking.

I did compare the two indexes between the FCP 5 and FCP HD books and found some differences in the number of headings under each chapter and how they were labeled. Most of that was often nothing more than semantics. Thus, I admit that I am mildly confused at the new text coming in with roughly 200 fewer pages. Unless I compare each of the two books page-by-page, project-by-project, I simply cannot explain such a large difference, an X-Files conundrum.

There really is no narrative in Final Cut Pro 5. It is first and foremost an instructive book designed at familiarizing the FCP user with its functions through the use of the different video and audio applications found on the disc. This serves several purposes in that with the gradually increasing complexity of the tasks set forth to the reader, increased familiarity breeds increased knowledge and confidence. While there is no book that I can think of that will improve the creative aptitude of an individual, the more you know, the more creative tools you have at your disposal and, thus, the sooner you will be able to achieve your artistic vision.

There is no question that Diana Weynand and Peachpit Press have succeeded at presenting Apple's Final Cut Pro 5 in a manner conducive to sequential learning. If you already have the Final Cut HD volume you will find that coverage of new features as well as completely different media makes it a worthy purchase. If you are just starting out with FCP than this book provides you with a great way to learn.