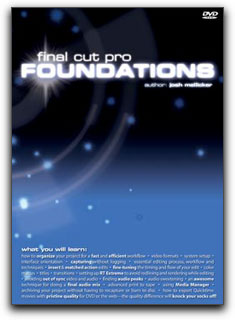 There are now several Final Cut Pro tutorial discs on the market. I have had the pleasure and opportunity to view and use most of them. The majority of them are comprehensive, produced with attention to quality and of good value to their audience. Many are addressed to the intermediate and advanced editor and some to the new user. Final Cut Pro Foundations, prepared and produced by DV Creators, has focused itself for the new user who wishes to clear up the mysteries of Final Cut and learn how to begin editing quickly and painlessly.

Needing Quicktime 6 or above, Final Cut Pro Foundations provides a thoughtfully designed curriculum enabling the new user of Final Cut Pro logical steps to learning the sequence involved when getting started. The new editor in Final Cut Pro will discover a discussion of video formats and folder organization, advancing to creating your project settings, onto basic log and capturing, utilizing your editing tools, applying filters and transitions, importing music and foleys, and finally exporting your finished project and making use of the Media Manager. There is all one needs here to really get a solid grasp of what Final Cut Pro is all about and how to productively use it. 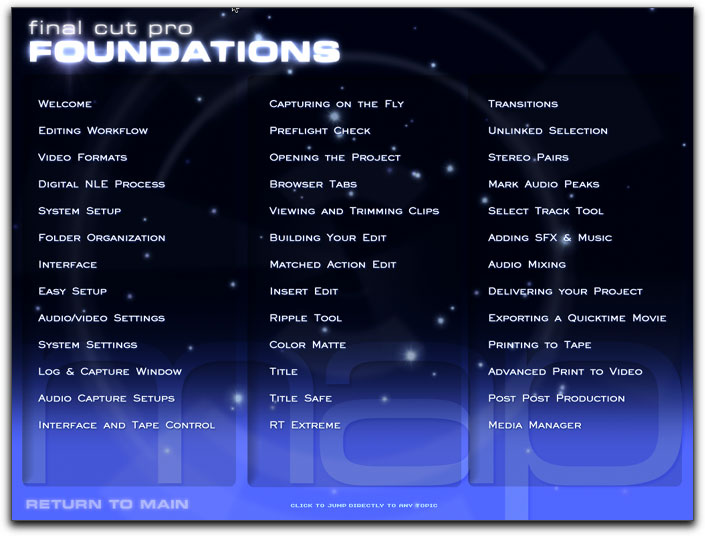 A complete menu of properly ordered sections, easily accessed to find what you need or go from beginning to end.

The pacing of the disc is just fine, narrated by the likeable Josh Mellicker, you can proceed as quickly or as slowly as fits your learning style and modality. Typical of the DV Creators other tutorial discs, the user of FCP Foundations will have access to the full menu which she can revert back to at any time as well as the 'chunkalized' steps provided to either repeat or move on. 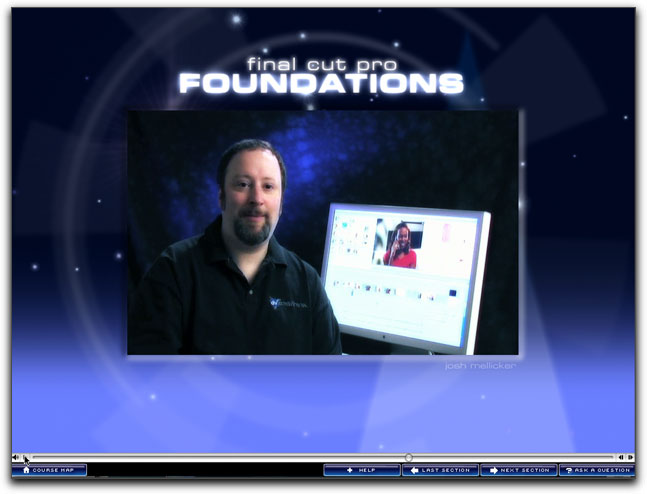 Josh Mellicker, your host, was one of the very first to create tutorial discs for Final Cut Pro
with his FCP PowerStart discs. He has the knowledge and skills down pat.

Depending on which section of the menu you are in, each step allows you to work along with this DVD while you are following on your own Final Cut Pro. I have always believed that we learn best by doing and this is the same approach taken by DV Creators. The disc window is easily adjustable to fit the size and space of your computer monitor, and the chunkalization of each section prevents the tutorial from running away from you while you are working or experimenting with what you have just been presented.

A Documents folder is provided allowing you to use the many same media files Final Cut Pro Foundations utilizes in the various sections of the disc. This is inclusive of the video files, music from Sonic Fire Pro and ambient sounds made within Soundtrack Pro and Quicktime. For organizational purposes you can save any of your own newly created projects within this folder as well should you stop for a break and come back later.

There's plenty of media to work with should you want to follow the Foundations project as it is presented.

Final Cut Pro Foundations is also full of a ton of tricks and shortcuts that will be of great benefit speeding the workflow and learning process along. Even the more intermediate user will find little nuggets of gold that will enable themselves to be more productive when at the editing bay. 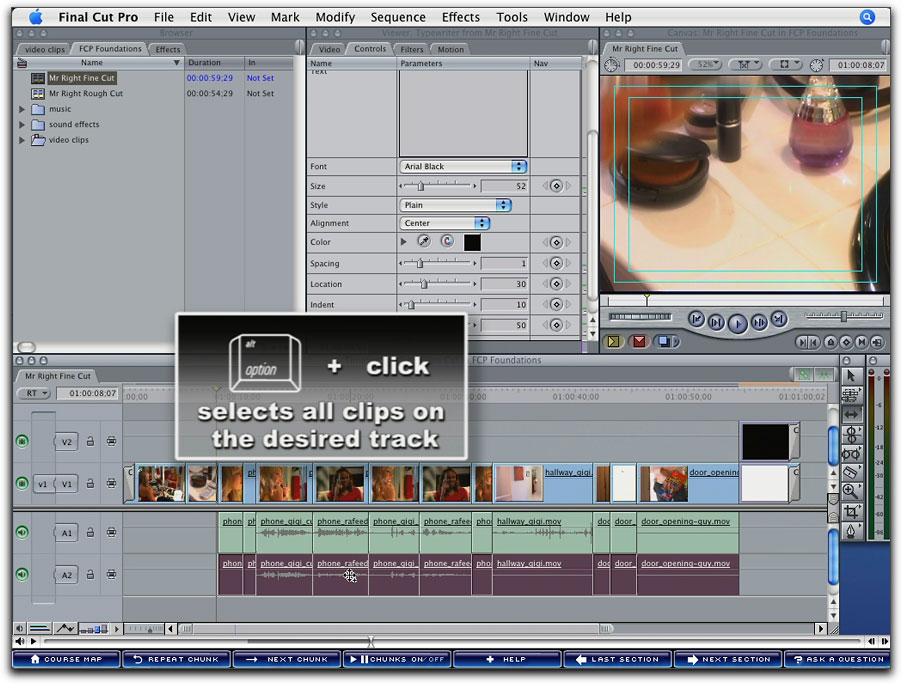 The basics are clearly demonstrated along with useful access tips. 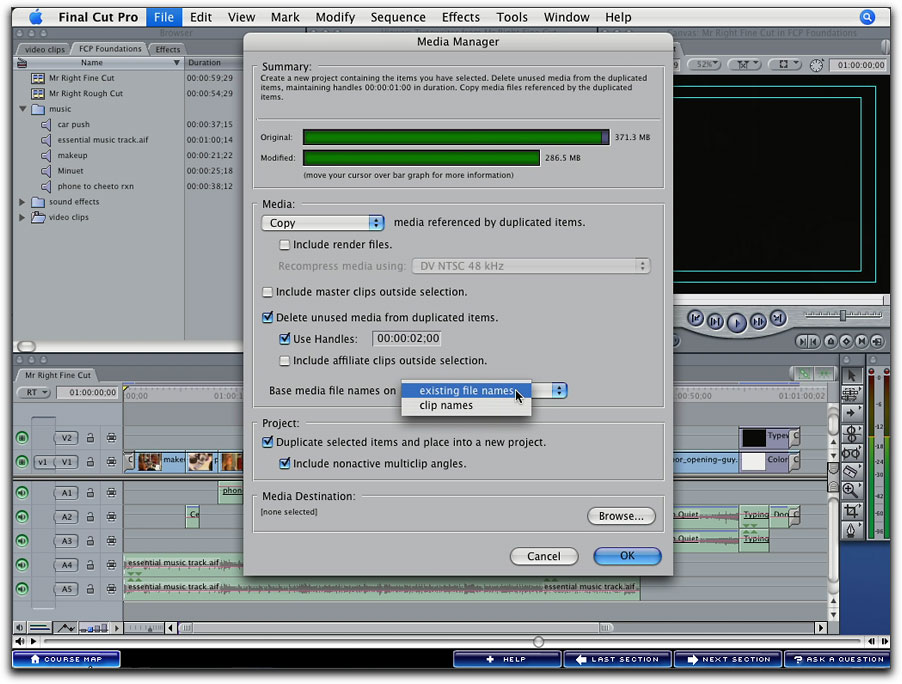 Every level of user may benefit from just the Media Manager section alone.

Aside from the easy to use chunks, what really stands out with Foundations is that, for the new user, too much talk of theory can be confusing and Final Cut Pro Foundations serves the beginning editor well in avoiding that. DV Creators approach is to clearly explain and demonstrate the set up, use of the interface, tools and techniques one step at a time without filling the audio with overblown theory that might just fly over the heads of someone new to working with Final Cut Pro. It is this simplicity in its approach that enables the user to feel they have accomplished something by the end of the disc without being overwhelmed and discouraged by a lot of mumbo jumbo. That can come later as the editor gains confidence in their abilities. Confidence can go a long way and I can heartily endorse Final Cut Pro Foundations on that basis.