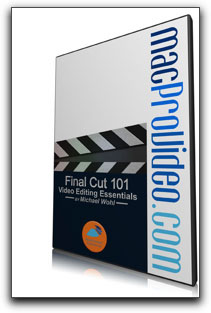 
While there are no shortages of supplementary tutorials for most Apple applications, many of them are a bit costly and will often speak over the heads of their intended audience. This disc, which is also available as an on line download from MacPro Video, is intended for the new editor using Final Cut Pro either for the first time or who hasn't quite gotten a handle on much of Final Cut's abilities. Created and narrated by Michael Wolh, who better to introduce the newcomer to Final Cut Pro than one of the founders who designed the application in the first place? 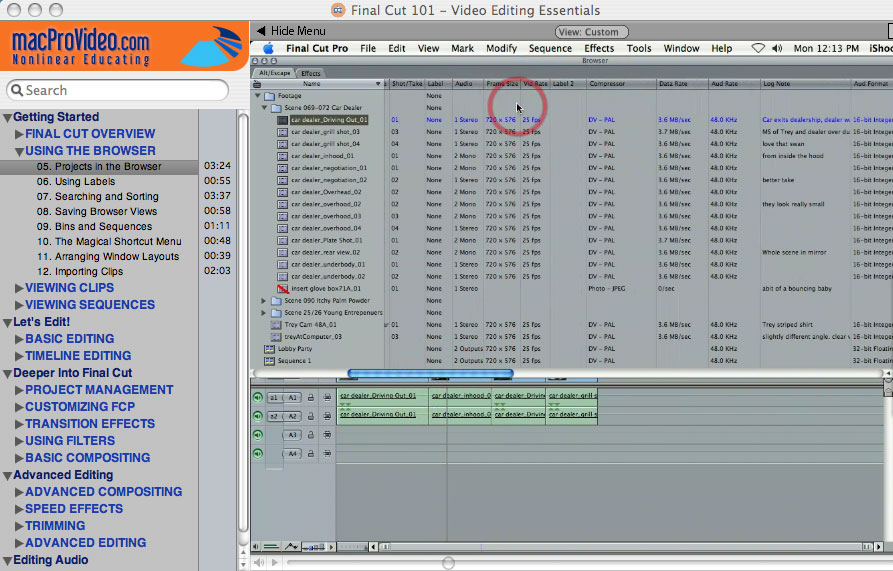 An easy to read tutorial interface duplicates what the user sees. They will have no difficulty switching back and forth between the tutorial and Final Cut Pro.

There are no shortcuts to the axiom that you need to practice your craft in order to learn it. Final Cut 101, Video Editing Essentials doesn't skip the many shortcuts that make learning fun, creative and productive. The curriculum spans roughly five hours of all the essential editing techniques that you will need. Nothing important is left out. I'm sure the advanced user of Final Cut Pro could think of a few things they would have liked to see covered but this disc was not meant for them. It is solely meant for the person just coming into Final Cut. 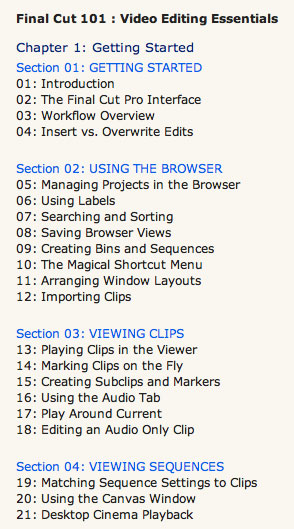 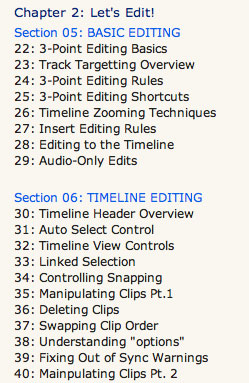 A full agenda to keep the new editor busy and which clarify most everything they could ask for.


As you can see from the above syllabus, learning Final Cut Pro is made considerably easier by sequencing the various techniques in a manner conducive to learning. What the advanced editor often takes for granted can be absolutely mystifying to the beginner. Michael does a fine job presenting the material with an easygoing ambience and tonality. He never goes too fast and its certainly easy to repeat sections over again or go back or forward to anywhere in the menu in order to find sections of particular interest. While there are no media files to download in order to use this disc, this should not in any way be a hindrance to learning. Since Final Cut 101 takes you from the very beginning with its basic overview, to sequence settings, and log and capturing right on through to nesting and basic compositing, the user will probably prefer to use their own media in the first place and save some room on their hard drive at the same time. 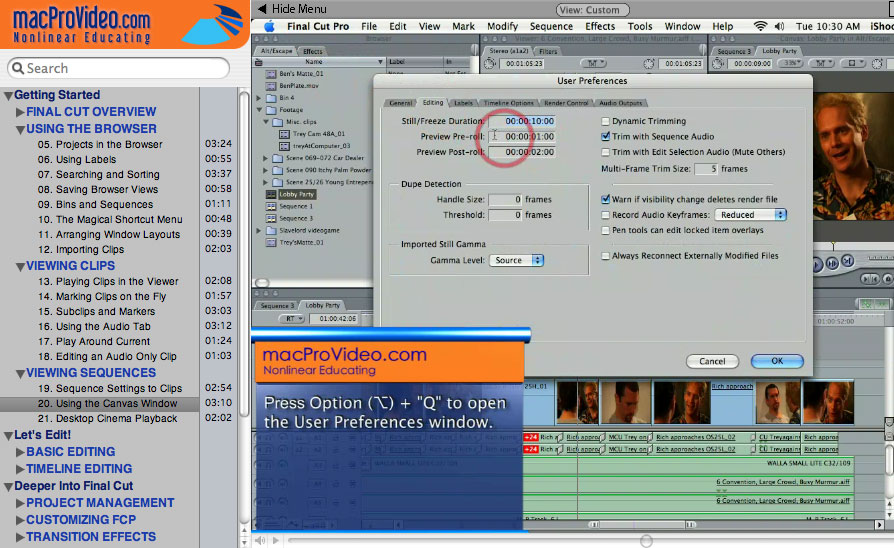 Frequent pop up tips help speed up the learning curve as well as the editing workflow.


Bottom line for this brief review is that this is not the first time I have encountered something that I wished I had had when I first started with Final Cut Pro. There is nothing confusing about Final Cut 101's direction, narrative or material used. I can easily recommend it and that's what I'm doing.