Although many Mac users may consider it sacrilege, we're faced with delivering content for a Windows world. Whether it's the corporate client who's banned QuickTime from their servers or simply reaching the masses of Windows users who fear installing QuickTime, deliver we must.

Flip4Mac, by Telestream, enables Mac based content creators to deliver Windows Media 9 files. In the past we were limited to using Cleaner's Windows Media 7, a not very pretty or efficient predecessor or, buying a Windows box and dancing back and forth between computers.

Unlike a full-blown compression program, Flip4Mac is an export component. It runs in FinalCutPro 4.5, QuickTime Pro 6.5 & up, even iMovie. This is great if you just need to make a WM9 file and don't have the budget for a complete compression app nor the tweaking time such apps bring. Certainly if you're a dedicated compressionist you can run Flip4Mac in Cleaner and in Sorenson Squeeze 4.1 (announced at MacWorld and coming soon). Final Cut Express and Compressor support is also in the works.

In FCP you can output using QuickTime Conversion but my preference is to use Flip4Mac in QuickTime Pro. This keeps FCP free to do what it does best, editing, while QuickTime Pro exports the WM9 file. Just output a reference or self-contained movie, open QuickTime Pro, Open Movie In New Player, go to File Export, chose Export Movie to Windows Media.

Flip4Mac comes in two flavors, a standard version which includes single pass CBR and VBR and a "Pro/HD" version which adds 2-Pass and WMV HD encoding along with 5.1 channel audio (surround sound) as well as Window Media Advanced, Windows Media Audio Professional and lossless encoding and sampling rates up to 96 kHz.

You can choose between CBR (Constant Bit Rate) and VBR (Variable Bit Rate), 1-Pass and 2-Pass varieties and 2-Pass VBR constrained. CBR is predominantly used for streaming servers. Don't confuse this with the more common "progressive download." A true streaming server has to have tight reigns on the bit rate and bandwidth to allow heavy multi-user access. CBR encodes will keep to the targeted bit rate even if it means sacrificing quality.

In the Pro/HD version of Flip4Mac both CBR and VBR have 2-Pass versions. The first pass allows the codec to "know the future" so it can make intelligently make decisions when managing the bit rate on the 2nd pass.

One-Pass and 2-Pass VBR operate differently on the Windows side as seen in Flip4Mac. In 1-Pass VBR the bit rate setting is ghosted. You're targeting the Quality setting. This also means you'll get very different average bit rates with a given Quality setting depending on the content you're encoding. Again, the faster the action, camera moves, dissolves, the higher the data rate needed for a given Quality setting. This also means if you want to target a give data rate may have to experiment.

Two-Pass VBR allows you to target a bit rate. Either select one of the suggested bit rates or simply type in your target in the field. Don't forget that audio bit rate will be added to this total. The bit rate is an average over time since, VBR, by its nature, varies based on the content at a given moment. In this case the Quality slider informs the encoder whether to drop frames to maintain a sharper image. Since I find dropped frames irksome so I put the Quality slider to Zero and increase the bit rate setting if I want a sharper image. The quality and bit rate control that 2-Pass VBR offers makes getting the Pro/HD version of Flip4Mac a must for the serious compressionist.

There's also a 2-Pass VBR Constrained mode. This puts a ceiling of two times the bit rate. I found this setting created dropped frames in areas where the video would likely exceed the ceiling. You'll likely see this ceiling user settable in a future version, which should help this issue.

Flip4Mac delivers HiDef too. This is great for those thinking about delivering HD in the corporate environment. You can create full screen HD at 1280x720p and 1920x1080p with 5.1 surround sound no less. You'd need some hefty Windows XP iron to play those files back though. You would be able to play those from such a PC to a HD TV set or monitor as well as create a WMV HD DVD playable by one of the very few DVD players that can decode it.

Flip4Mac will allow you to choose between WMV 9 Standard and Advanced. When you try to compress with Advanced you'll get a warning that such files won't play on your Mac. Advanced might handle some aspects better such as interlace video but you'll lose cross platform compatibility with your files. 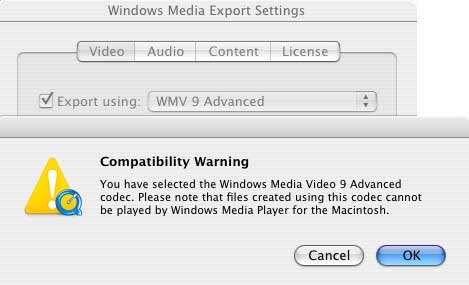 The nice thing about a third party export component is the user flexibility. You don't need a compression app to export WMV from FCP or QuickTime Pro. On the other hand you can run Flip4Mac in Cleaner and take full advantage of Cleaner's "tweakability" and you'll have another option with Squeeze in the near future. One issue I found is that any attempt 2-Pass audio encoding in Cleaner caused it to crash. Stick to a good 1-Pass audio encode setting along with 2-Pass video encoding and your ears really won't notice the difference. 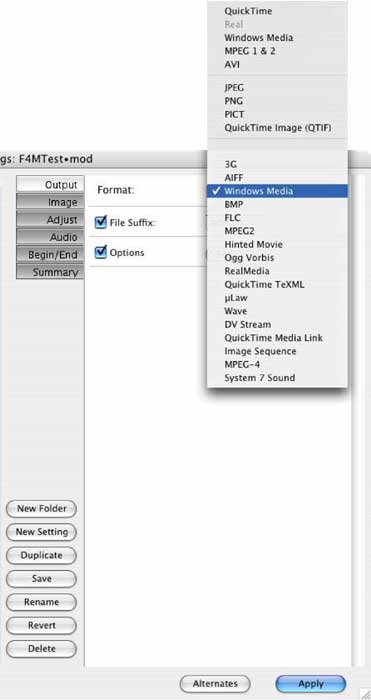 Flip4Mac also brought to light just how poor Microsoft's Windows Media Player 9 is on the Mac compared to the PC. I'd often run into PC created Windows Media files that would cause WMP 9 stall on the Mac. There's no difference here with files created on Flip4Mac. It seems there's an issue around file buffering and/or data rate spikes that choke the player on the Mac only. Not only were these files smooth playing on my PC, I had great success playing Flip4Mac WM 9 files on my ancient Windows 98 Pentium II using WMP 7.1. In addition, those WMV Advanced encodes and WMV HD encodes won't play back on the Mac. The backwards compatibility of the WMV 9 Standard encodes is critical though when dealing corporate clients with stodgy IT people who refuse to update their servers.

Even though WMP 9 on the Mac is crippled, Flip4Mac allows you to create great encodes playable on cranky old PCs with WMP 7.1 or the latest PCs with WMP 10 with HD and Surround Sound playback. The Pro/HD version is great for those who need mission critical 2-Pass VBR encoding too. At $99 for the standard or $179 for the Pro/HD version it'll greatly broaden your online reach and satisfy your corporate clients. With the additions of 2-Pass features at such a small price difference, I'd recommend the Pro/HD version.

Craig Seeman is a Shooter/ Editor / Compressionist for 3rd Planet Video in NYC. With over 20 years experience in post production his work has ranged from corporate videos and local Cable spots to docs aired on PBS and Discovery.This article first appeared on the nyc fcp user group web site and is reprinted here with permission.