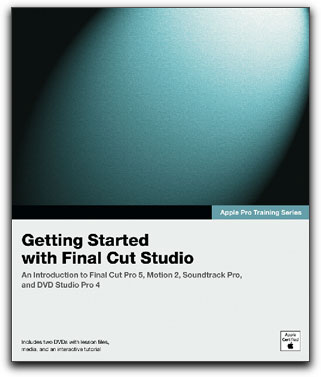 
For those of us who have used Final Cut Pro since its inception with version 1.0 and who have bared witness to its growth as a leading editing solution, who have seen a community of editors unite in their shared experiences with FCP and joined together on the Ken Stone site as well as others with this commonality, we forget that there are new infusions joining the ranks most every day. While we look forward to the next advanced techniques books, tutorials and workshops it is easy to lose sight of the many who are seeing the Final Cut interface for the first time. Their confusion and questions could go on unabated or they could focus on the many new supplementary tools awaiting them, tools that did not exist when the Final Cut community was in its infancy.

Getting Started with Final Cut Studio is addressed to the new user of Final Cut Pro, Motion, Studio Pro and DVD Studio Pro 4. It is not meant as a complete and comprehensive reference tool or as a 'How 2' for the many special effects and creative motion graphics that may have inspired them in the first place. Those books and tutorials are elsewhere and plentiful. Peachpit Press has a full line of 'Advanced' books within their excellent Apple Pro Training Series. No, most of this book is aimed at the bare bones beginner and duplicates the PDF files enclosed on the two tutorial discs that ship in the box with Final Cut Studio. Never the less, for the advanced user new to the Final Cut Studio, the books 'Mastering' tutorials provide insight and understanding to the many new features found in the latest versions of Final Cut assembly of applications. Because so many prefer to have a manual to refer to rather than a PDF file, Peachpit Press has reprinted them here in manual form. Perhaps this is what Apple should have done in the first place. Enclosed with Getting Started are two DVDs with lesson files, media and an interactive tutorial, which was easy to use and refer to. Getting Started with Final Cut Studio retains the quality that runs consistent with all books found within the Apple Training Series. The pictures and graphics are in beautiful, easy to read color and the text is on high quality paper guaranteed to last several readings and then some. The book is divided into 7 chapters, the first two focus on an introduction to Final Cut Pro and do an admirable job quickly bringing the new user up to speed on mastering the interface, working within a project using most of the tools and modification possibilities available. Lessons 3 and 4 do the same for the Motion user covering working with behaviors, text, audio, the new replicator and image masks. Lesson 5 focuses on Soundtrack Pro and chapters 6 & 7 delve on an introduction and mastery of the many facets of DVD Studio Pro 4.

The lessons in both the supplied DVDs and book stress hands on training. The media necessary is certainly well supplied though I usually like to substitute my own footage. If you are a beginner, starting at page 1 and continuing straight through is advised and you will be happy you did as this book's lessons will provide you with a solid foundation with all of the apps within Final Cut Studio. If you are a more experienced user, you will find that the Mastery chapters, especially, will lend a concise understanding of the new features to be found as well as a thorough review of many you might have forgotten about.

All in all, what's not to recommend? Getting Started with Final Cut Studio does the job its intended for.