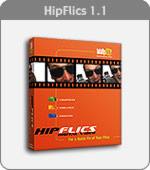 As most anyone here is already aware, full size, uncompressed video is undeliverable over the Internet and unplayable on many older computers. To make video viable for Internet or CD ROM delivery, we compress it using one or more compressor/decompressors (codecs). These codecs require other software to make them fully useful. If the codec is the engine, a program like Discreet's Cleaner 5 is the car that harnesses the engines power.

Now two new programs have come along to take their place in the market. Totally Hip (maker of LiveStage Pro and Live SlideShow, among others) has released HipFlics and Sorenson Media (makers of one of the most popular compression codecs) has released Sorenson Squeeze. Both are in reality niche software, neither has the sheer range of options that Cleaner has. Cleaner can compress Real, WMP or QuickTime with any of the available codecs and provide the widest possible options for all three. That said, in my own work, I encode only QuickTime, so much of Cleaner's versatility (which comes at a cost of $599) is wasted for me. Both Squeeze and HipFlics are much lower cost alternatives ($149 and $99 respectively), both encode for QuickTime, and both include many of the advanced features that Cleaner offers. For the purposes of this review I am using HipFlics 1.1 and Squeeze version 1.0 (beta). 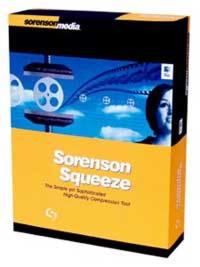 I must admit, I was fully prepared not to like either program very much. After all the codecs alone cost hundreds of dollars, and isn't using an admittedly cheap program to drive them, like trying to drive a railroad spike with a tack hammer? How can a piece of software that sells for less than 1/5 the price match up against something like Cleaner, a "real professional's" tool? Well the answer is, much to my surprise, "Quite well." Though for anyone who needs to compress in formats other than QuickTime (and my opinions on that can be found elsewhere), Cleaner remains the best choice, I was very surprised at the quality and ease of use of both programs.

There are clear differences though. For example, HipFlics offers a timeline that can be used to apply multiple codecs or compression settings to different parts of the same video (though audio can still only have one codec). This single feature when used correctly, makes HipFlics a very powerful and useful tool for an admitted "image snob" like myself. Currently if I have video that I want to apply different settings to (for example a clip that combines high action in one scene with talking heads in another) I have to create sub-clips, then import these separately into my compression program. The ease of applying them across a timelime saves me several minutes on any complex clip. That's real savings in production terms and that's money-in-the-pocket without sacrificing the aesthetic .

Also as to workflow, HipFlics is able to create "droplets" using any settings (presets or custom) in its library. Again, highly useful if you are processing a number of very similar clips; something else I find myself needing to do often.

The HipFlics interface is very reminiscent of Totally Hip's Live SlideShow and is simple enough to grasp that I had my eleven year old daughter compressing family videos in under a minute (granted she is an exceptional twelve year old, but you get the idea). I particularly like the two-up and four-up features of the interface that let you compare before and after side-by-side, or try multiple combinations of filters and codecs for comparison.

One of the things I most enjoyed about both HipFlics and Squeeze, was that I was able to apply my current workflow directly without having to adapt it to the software. In general I make two passes. In the first I crop, scale and adjust the saturation and contrast. Then I save with "None" as the compressor. This gives me a perfectly pristine copy to compress, with useless detail already blown out of the highest and lowest ranges. I compress that copy, usually with Sorenson Video 3 (SV3), though I also had impressive results (particularly at low bandwidth) with the included On2 VP3 codec.

With Hip Flicks, I simply created a new setting (confusingly called a codec in HipFlics terminology) using None as the compressor for both audio and video, then created a filter setting that handled the other adjustments. I applied these to the first pass, then used a slightly customized version of the SV3 preset for the second pass. The results were as good as anything I had gotten out of Cleaner. The process is much the same for Squeeze, though the interface features a single panel for customization with settings for audio, video and adjustments (see below).

Frankly, once I got under the hood with HipFlics and Squeeze, I was amazed at the level of customization available. While superficially both seem a consumer product designed to compliment such software as Apple's IMovie. The power of a high voltage professional tool hides just below the surface. Encoding is about what you get through using QuickTime Pro's "export" feature, but each one also offers the ability to "filter" or adjust various settings like contrast, brightness and white and black restore.

Because they tap directly into the codec's "options", both give the user the highest level of control possible with each codec. For example, Discreet only recently released an upgrade to Cleaner with support for two-pass VBR (variable bit rate) encoding in SV3, and both HipFlics and Squeeze already support this type of higher quality (though admittedly slower) encode. HipFlics and Squeeze also support all Cleaner's other SV3 settings, such as bi-directional prediction (another handy Sorenson feature) , alpha channels and watermarking in SV3. In addition HipFlics has its own ability to add custom watermarks to video, even store them for handy access in a library accessible from the main interface.

There are a few annoying flaws. For example, HipFlics defaults SV3's controls to single pass VBR and making changes to the filter presets is less intuitive than I would have liked. Also, HipFlics suffers from a mediocre (at best) manual, lacking in any discussion regarding the more advanced functions of the software. Though it did include two relatively straight forward tutorials, both provide a walkthrough of the software's simpler functions. A better tutorial can be found online at their web site, but even that is too general to be of any use to an experienced compressionaist and without enough conceptual background to be of much help to a beginner. Overall, the manual is more of a definition of the tools, without good guidelines as to the use of the tools. Given the apparent aim of the software at less sophisticated users, I would like to have seen a greater discussion of general compression issues (why and how) and an overview of the available codecs. It does offer the widest array of compression codecs available for what ever you have installed at the time for both audio and video and it comes packaged with the On2 VP3 codec (at least the version I received from Totally Hip did).

For its part the Squeeze manual does provide considerably more insight into the details of compression (though its a bit diconcerting to get to the page labled "Fraunhofer MP3" and find it blank; hopefully that is fixed in the final release). Squeeze's main limitation is that is provides for only Sorenson SV3 or Sorenson's standards based MPEG 4 video compression (not to much of a surprise there), though it does offer a wider array of audio compression, including QDesign Music 2, Qualcomm PureVoice, Fraunhofer MP3, and IMA 4.

I would recommend either of these tools for anyone doing QuickTime compression. Given the uncertain state regarding Cleaner in recent months (was Terran -- then Media 100 -- now Discreet) and the length of time it took them to release the recent update, its not a bad idea to have a solid backup that will fit easily into a workflow. With its superior interface, and powerful timeline functions, I believe that HipFlics pulls away from Squeeze and gives even the mighty Cleaner a run-for-its-money in the area of QuickTime only compression. Certainly looking at the price performance ratio, HipFlics wins the day hands down.

Clifford E. VanMeter is the Director of Web Services for PlayBox Media, experts in Interactive QuickTime Deployment and Development, whose clients include automakers, national magazines and universities. This explains why he is now freezing his ass off in a Michigan winter instead of lounging on a patio in beautiful downtown Burbank. He is an acknowledged QuickTime wired media expert and is currently completing his first book, "Building the 21st Century Web Site". He can be reached at cliff@playboxmedia.com.

This article first appeared on lafcpug and is reprinted here with permission.
All screen captures and textual references are the property and trademark of their creators/owners/publishers.