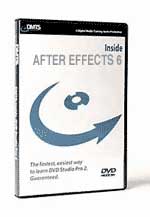 Video editing professionals all recognize the importance of matching the right application with the right task. In fact, knowing both the capabilities and limitations of any application is an essential characteristic of all good editors. For these reasons and others, most Final Cut Pro cutters recognize the important role Adobe Affect Effects plays.

Inside After Effects 6, by Magnetic Media, is a basic introduction to Adobe's latest incarnation of After Effects, perhaps the premier software-based cross platform animation and compositing program available today. The Director-based DVD provides in twenty-four lessons a simplified introduction to After Effects 6.0 in the context of developing a specific project, which is included on the DVD. This is not an explanation of AE's new tools in version 6. Instead, it introduces After Effects itself.

The DVD is divided into three separate categories ­ Animation, Compositing and Finishing (your project). As the tools and features are introduced, they are used to develop the project. This approach is refreshing and instructive, because it teaches in real world environment, rather than simply introducing tools. For those of us who suffered through years of Electric Image manuals, you'll know what I mean. 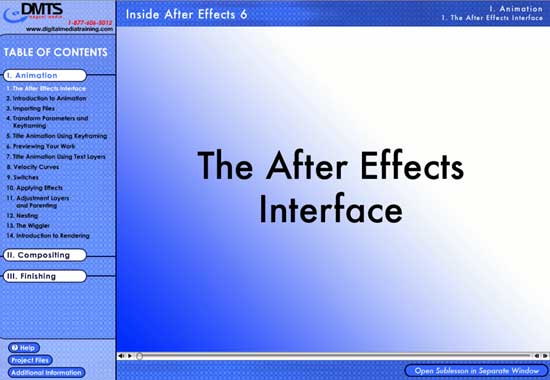 After Effects expert Jurgen Miller does a good job of explaining the basics of this intensive program. What Jurgen does not do is explain the intricacies of every filter, effects, and capability of AE6, which is consistent with the introductory approach this training DVD assumes. If you want an in depth learning aide, you might want to consider the much pricier offerings on After Effects from Total Training.

The Animation section contains introductory materials on the After Effects interface including how to import files, and set up project settings for use in D1 output, including Final Cut Pro. Because AE is keyframed based, Jurgen spends some time explaining both concept of keyframing within the program, and how parameters for FX and titling can be keyframed. A segment on the new titling and text capabilities introduced in AE6 is included.

Additional sections instruct on the use of velocity curves to provide realistic motion in animation, the use of modes and switches to affect appearance between layers of video and text, and controls used to render your compositions to your target video codec. A section is included on how to set up a render setting for movies intended for Final Cut Pro NTSC DV use.

The animation session does not detail the use of every filter or effect provided in After Effects. Rather it explains how specific filters are utilized to achieve a look in the project file provided on the DVD. 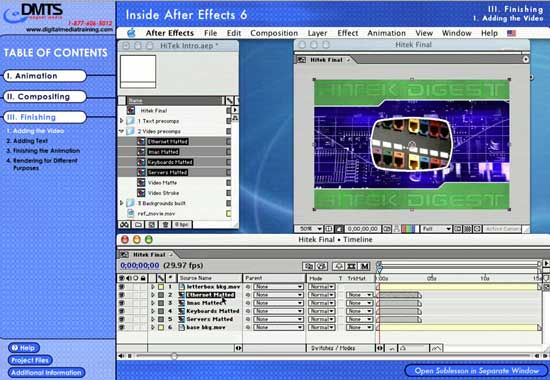 But principles taught here apply with equal force for any filter or effect in After Effects, or in FCP for that matter. Basic instruction on AE's Wiggler and Parenting capabilities are provided as well as the importance of nesting when applying effects. The latter section is useful in understanding the same concept in the FCP interface.

The Compositing section deals extensively with the use of masks, track mattes, and blend modes. As with the other sections, Jurgen's comments are augmented by on screen graphics depicting modifier keys, and examples of before/after application of effects. It also includes information on the need to prerender nested compositions to speed production.

Perhaps the least useful section, in my opinion, is "Finishing" your video. I state this because it deals with the final steps necessary to achieve what the Jurgen wants to achieve in the supplied project composition. Much of what is discussed is duplicative of earlier materials. Frankly I think this section should be shortened and a primer on available filters and their use should be added. But this is a minor criticism. The final chapter on "rendering for different purposes" demonstrates how to set up a template for rendering for use in NTSC DV.

As I have previously stated, I prefer this style of DVD-based, random access, interactive teaching. FCP cutters unfamiliar with After Effects capabilities or those seeking additional tools to augment their video arsenals will find this teaching aid useful. But remember that this DVD is only introductory. Nor is it an in depth examination of the new capabilities of After Effects 6. While it introduces some new features, that is all it does. But for those unfamiliar with AE6, the price is right, particularly at the LAFCPUG store.