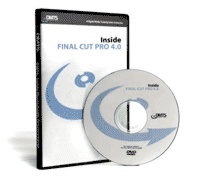 DVD Includes:
Over 7 hours of video-based lessons
Project Files (to work along with the instructor)
Company: Magnet Media Films

Final Cut Pro 4 is a radical upgrade from version 3. It has a ton of new features that are very useful to video and film editors.

The question is, how do you learn all the new stuff? Sure, you can muddle through the manual, but isn't it always easier to look over someone's shoulder while they show and talk you through the new features? Video training for video production is the way to go for that, unless you have friends who are already fully adept at FCP 4 and have the time and patience to teach you. Well I don't have those friends so this DVD is ideal for me.

Magnet Media has produced some fine titles for this purpose and I've reviewed several in the past. This one, however has a new direction, in that it focuses on people already familiar with FCP who want to learn what's new and how best to take advantage of all that is in FCP 4. They have other titles to get you up to speed if you're a Final Cut virgin,such as "Inside Final Cut Express." and Inside Final Cut Pro 3 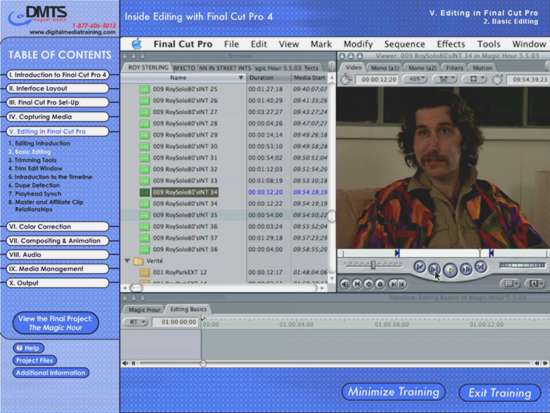 The host is Evan Schectman, a professional editor and the founder of Outpost Digital, and he is a very thorough teacher. He keeps your attention with a steady stream of good information, ­ over 7 hours worth, and it's PACKED. You'll be going back over and over to rewatch sections, and thankfully the interface makes this very easy. Actually, if you don't quit the app, and just "minimize" it, it will start playing again from where you left off when you click it's icon in the dock.

There's powerful stuff in here: how to customize the interface, how to optimize your computer for even better performance ­ with explanations as to why you're doing what you're doing, and even how to prioritize what your processors are doing via the Terminal. They show how to easily set up any configuration to make best use of your various types of screen real estate including the new customizable buttons in the windows, remapping the keyboard, and much much more.

The capturing and editing sections nicely explain how to bring in and work with a variety of formats, along with solid explanations of each of its various strengths and weaknesses. It also goes into a great deal of the basics of the FCP interface, very helpful if you're a recent convert from another NLE.

The color correction section is fantastic and Evan explains all aspects very well. He covers how to use the waveform and vectorscopes, and the other monitors, to help balance your footage and keep it broadcast-legal if that's your final delivery goal, as well as how to create a different aesthetic in post, e.g. film look, aged footage, etc. These tips alone are worth the price of admission.

The compositing and animation section not only go through the basics, but covers the new type tools and time remap tools. There's even an undocumented feature on time remapping that they, well, document.

The audio editing section takes you into all the amazing new audio tools available with FCP 4, including Soundtrack. This of course is an amazing tool what with both the included loops, and importing your own, and Inside FCP 4 gives us a great tutorial on on how to use it.

The Media management section has many good tips. Though the interface for the MM hasn't changed much, it's a good primer for everything from how to make an offline RT version of your project for editing on the road, to how to not destroy your project and related files with the Media Manager.

The Workflow for Output section also has great tips on archiving both your footage and your final projects and what to save when you backup a project, and more.

My DVD had a couple of glitches, one section wouldn't play, and at times playback on normal segments would run out of sync with the video. Pausing and starting playback again cured it, and my copy might have been a pre-production DVD, though it was fully packaged.

Overall, if you want to be really productive editing in FCP 4, this DVD is well worth the money, even at $199. The time you save with this DVD as opposed to spending all that time with the manual or bugging your friends for help makes this DVD a bargain in my book.

About Tony Donaldson: Tony is a sports photographer (still photography, mostly extreme sports) with clients including Xtreme Video (new magazine from the makers of DV), Sports Illustrated, Sports Illustrated for Kids, ESPN the Magazine, Millimeter, Video Systems, Cobra Seats, Lee Jeans, Maxxis Tires and many more. He also shoots, edits and produces video projects from commercials to short films (Odessa or Bust, The Cypher, Dissonance) to the Redline Bicycles Team video to a new video-based photography training series and a television wine show pilot. He lives and works in the Los Angeles area and spends way too much time online learning all of Ken Stone's secrets .
http://www.tdphoto.com
http://www.tdfilms.com

Available for purchase in the lafcpug Store

LAFCPUG Ed Note: Magnet Media Films is a sponsor of lafcpug.org, however this review and all reviews published on lafcpug.org are the opinion of the author and author alone and lafcpug.org's policy is to not edit or influence the author's opinion in any way, shape or form. [Top]
This article first appeared on lafcpug and is reprinted here with permission.
All screen captures, images, and textual references are the property and trademark of their creators/owners/publishers.