Reason no. 408 to love OS X: It permits entertainment while rendering. No longer do we need fear crashing Final Cut by firing-up the web browser for an alternative view to the render bar's glacial progress.

It was during such idle trolling of the net that I stumbled across iStopMotion, an outstanding application from Boinx Software that so completely fills its niche that it's tough to imagine how it could be improved.

iStopMotion is the brain-child of two live-action animators in Munich who longed to be able to do in video what they had achieved as kids in Super8. Yet their solution goes far beyond the constraints of traditional stop-motion photography, in which a single frame is shot, objects are slightly moved in the frame, another frame is shot, and so on, to simulate live action. If you've dreamed of creating your own claymation world ala Wallace and Gromit, or compressing the effects of three months of winter on your backyard into 30 seconds, read on.

While certain Mini-DV cameras offer variations of stop-motion/time-lapse capability, none to my knowledge is capable of true, single-frame shooting. Typically a camera will record 5 to 30 frames at once, far too many to achieve smooth stop-motion effects. There's also the wear-and-tear on the camera's tape transport system and recording heads to consider. Even if a given camera were capable of true, single-frame shooting, imagine the drum hours multiplying as you slog through two months of exacting claymation moves.

The boys at Boinx evidently looked at a DV camera, looked at a computer, stared very carefully at the Firewire cable linking them, and cried, "Ah-zo! Why record to tape when you can record directly to a hard drive?"

The mere ability to write to disk a single frame at user-set intervals-such as within iMovie-would have been a decent achievement, but iStopMotion provides tools far beyond those traditionally available to celluloid-shackled animators or iMovie users. 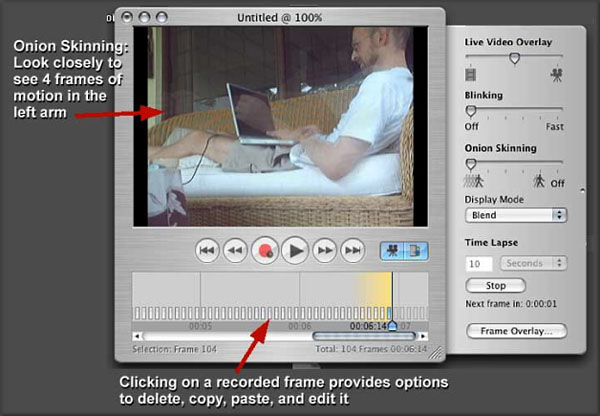 The most useful control is "Onion skinning," the ability to look back at up to five previous frames, each superimposed in decreasing opacity. This gives the animator a precise means of estimating his next move. And since the current, live image is also present in the frame, the animator can accurately make fine adjustment to objects within the frame, or move the camera incrementally along its tracking (or zoom) shot, without worrying that the change between frames won't synchronize with what he shot earlier.

Similarly, "Blink" alternately flashes the current, live image and the immediately previous image at a user-set interval as another aid to judging the next object or camera movement.

iStopMotion will accept any video input recognized by Quicktime 6 in OS X, including garden-variety, USB webcams. For a proverbially quick-'n'-dirty example, check out the time-lapse recordings I did while writing this article. Both were recorded with a Logitech USB webcam at an interval of 1 frame every ten seconds, with a playback rate of 15 fps.

In several hours of testing, iStopMotion performed flawlessly on a variety of machines-a G5 DP, a 17" G4 Powerbook, and two older G4 Powerbooks, including the one I'm using now to simultaneously write this article in Word, check email with Entourage, refer to the Boinx website using Safari, and record all of the above at 1 frame every ten seconds with iStopMotion. What's more, I'm sitting out on the back terrace in steamy Jakarta (current temp 32 C), connected to the net via AirPort Extreme at the blazing dial-up speed of 56k. All of the test machines, including this one, are running Panther.

This said, Boinx recommends periodic saves to avoid the loss of an entire sequence of frames, since the software does not write a sequence to disk as a movie file until the user stops a recording session and manually saves it. This provided the only slightly nerve-wracking moment when I went to save the first long time-lapse test, a sequence shot over 6 hours at 1 frame per 30 seconds. At first the continuously spinning beachball suggested a hang, but as the Powerbook's hard drive also continued chattering I decided to wait it out. Sure enough, the file was saved in its entirety-as each has been since-despite what seemed to be an inordinately long process.

Boinx offers a free version of iStopMotion ("Lite") that's limited to a frame size of 320x240 pixels and allows saving in either uncompressed Quicktime at Millions+, or Quicktime's DV codec, although a DV save results in a scaled-up movie with the expected artifacts.

Boinx says that a "Pro" version in development will allow "any" frame size, price unspecified.

Playback frame-rates are user-set when creating a new movie sequence. For web delivery, for example, you might elect to save the sequence flagged at 15 fps, while for sequences destined for broadcast or DVD, 29.97 or 25 fps would be appropriate depending on the video standard you're working in. Or, if you're going straight to film, 24 fps.

In addition, iStopMotion also gives you the choice to save image sequences rather than (or in addition to) Quicktime movies. In an image sequence, each captured frame is saved as a unique TIFF or PICT file, sequentially numbered, for later editing in Photoshop, etc. Once you've edited the frames as needed, they may be imported into Final Cut Pro, which will automatically create a video file for editing in the Timeline.

And, in case you need to edit only one or two frames, iStopMotion also gives you the option to edit any given recorded frame, before saving it, with an external editor such as Photoshop. Thus if you accidently dropped a Q-Tip, say, into the middle of your carefully orchestrated, stop-motion Barbie battle-scene, you could take a quick hop over to Photoshop, eliminate the errant Q-Tip from the frame, then get back to shooting, all without needing to save the original frame or exit iStopMotion.

Each recorded frame may also be deleted, copied, or replaced within a sequence prior to saving it as a movie or image sequence.

Finally, a cool little touch to top it off: Voice control.

Yes, you may place your camera out on the ice, with you and your Powerbook safely inside the igloo, and yell "Capture one!" at the computer to capture one frame of the passing polar bear. You may also yell "two," "three," or, "four," to capture up to four frames at once, or simply hit the corresponding digits on the keyboard-"3" for three frames, etc. And just to make it extra loony on those late nights of Barbie battle choreography, iStopMotion permits you to customize the voice-recognition phrases. So "Attack Ken!" could record one frame, and "Barbie, I'm home" could record two frames, and so on into the wee hours.

iStopMotion is a gem of a program that brings sophisticated stop-motion and time-lapse recording abilities to anyone with USB/Firewire camera and a Mac running OS X. Its uncluttered interface is a pleasure to use, and at US $39.95 with promised "unlimited email support," the price is a bargain.

David Sungkar is working on his second Indonesian-language feature film. He divides his time between damp Vancouver and sticky Jakarta. He is not affiliated with Boinx Software and paid for his copy of iStopMotion like any other good citizen.