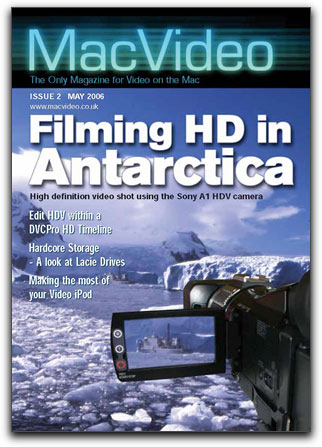 
Rick Young, who hails from the UK (across the pond), has published five FC Studio books, I have read several and they are quite good. Several days ago I received a package from Rick which contained his newest venture, MacVideo, a full color magazine devoted to video on the Mac platform. This issue, issue 2, focuses on many of the new HD cameras that have come to market. One article, entitled "Camera Wars", offers a side by side comparison of the Sony HVR-Z1, JVC GY-HD100/101, Panasonic AG-HVX200, Canon XL H1, and the Sony HVR-A1E. As you can see in the Table of Contents, shown below, other cameras are reviewed as well. There are a number of feature articles, "Streets of Birmingham" which is a real life location 'shoot out' between the Panasonic HVX200 and the Sony Z1. "Life in Morocco", Rick Young goes on assignment to Morocco with a Sony Z1 to film the cities snake charmers. "Antarctic Adventure", Rob Sewell shoots with the Sony A1 on a nine day trip through the Antarctic peninsula. Other articles cover Shotgun mics, Avid to FCP, FireStore Hard Drives, digital video projectors, video field order, and several utilities articles.

In the digital age, most of us have become accustomed to receiving our information, news, entertainment and even tutorials in electronic form and indeed MacVideo is also available as a subscription PDF download. But, for me, there is still something special about the printed word, I still love reading books and magazines. Below, I have included three page samples from MacVideo issue 2 so that you can get a feel for the quality of both the art and the writing. 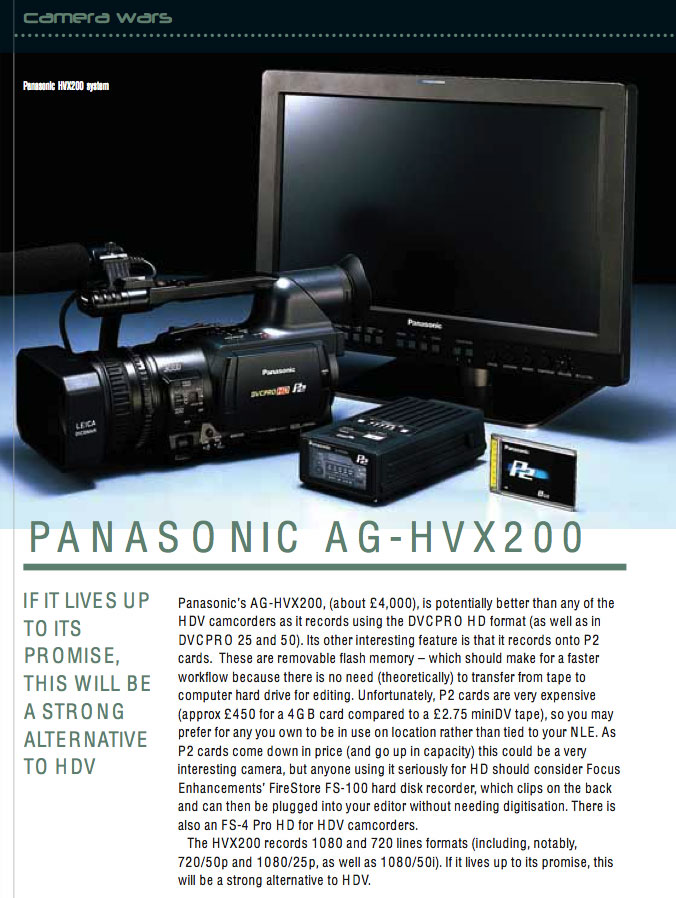 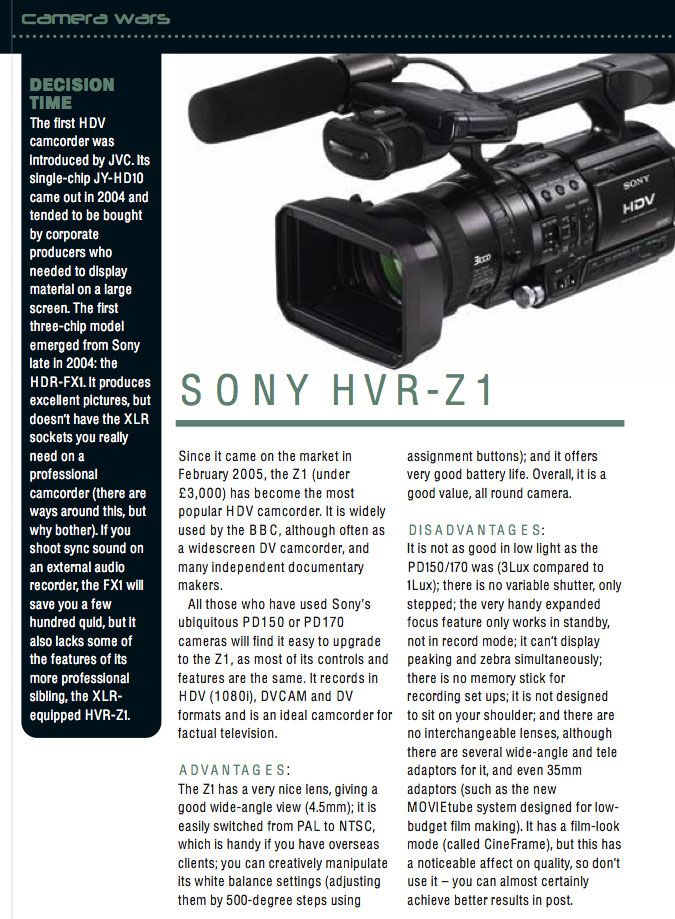 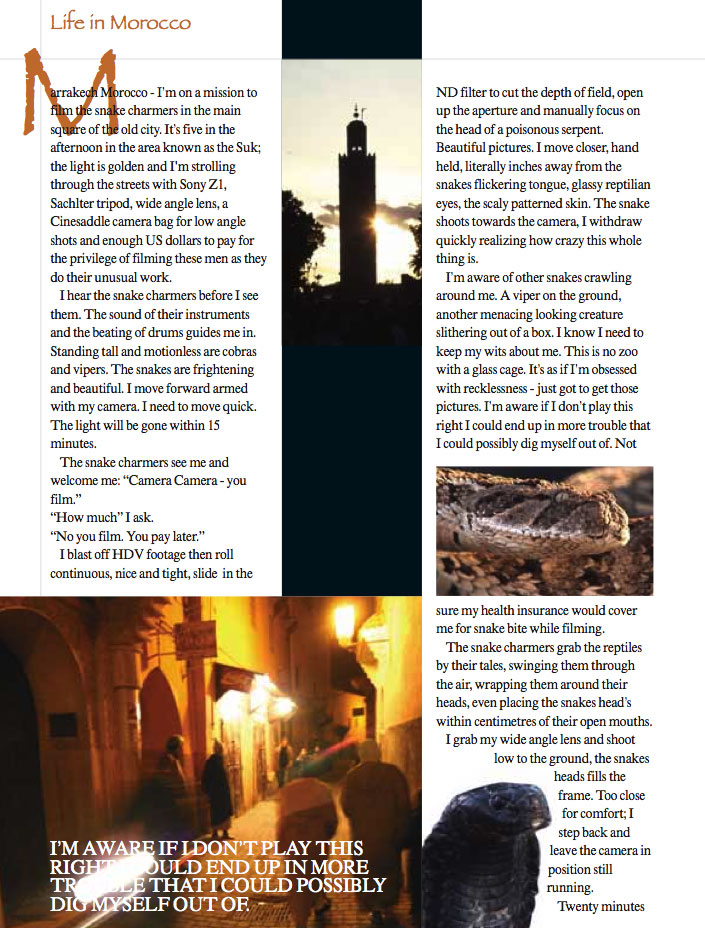 What's on the DVD
The MacVideo DVD included with this issue contains a selection of QuickTime movies in high definition. High definition is great but it unless you can see it a bunch of words describing how brilliant it is doesn't mean a lot. So place the MacVideo DVD into your Mac, copy the files to hard drive, click any of the QuickTime files and enjoy HD for what it is. Included is Antarctic Adventure (filmed using the Sony A1); Life in Morocco (filmed using the Sony Z1) and Streets of Birmingham + clips from the article "A Photographers Journey" (filmed using the Panasonic HVX200). To watch the movies at full-size choose the View Menu of the QuickTime player and select Full Screen. Also included on the DVD is the MacVideo Directory which is now too big to include in print as part of MacVideo magazine.

Included with either the hard copy or electronic subscription is access via 'pin' number to the MacVideo web site which contains additional materials, tutorials, QuickTime movies in Video iPod compatible format, searchable database for all MacVideo members with a world directory of editors, DVD authors, motion graphic artists, effects creators etc. Shown below is part of the MacVideo web site Download page. 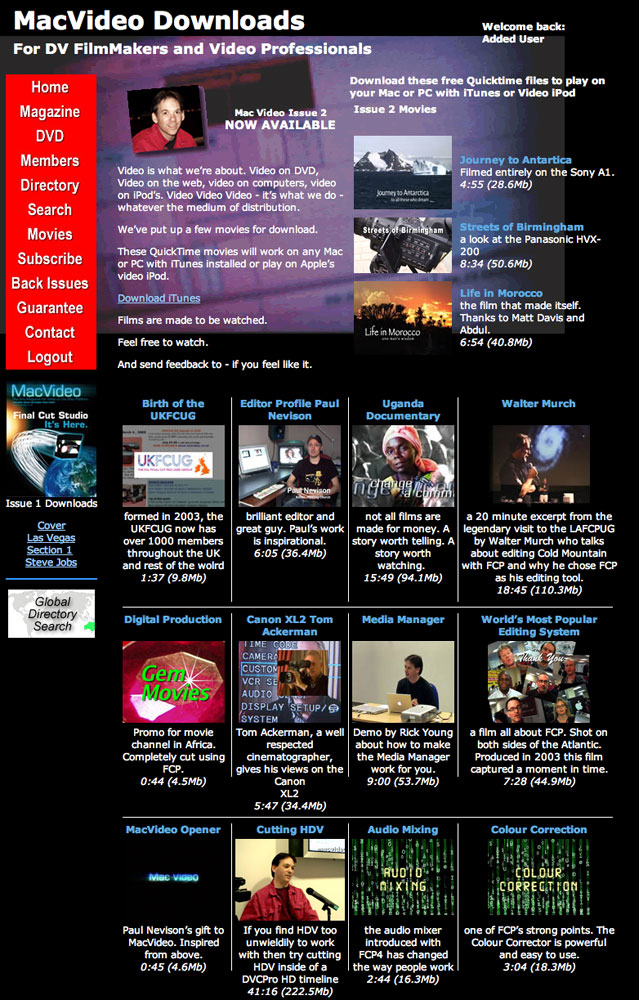 Summary
So the stage is set, a publication dedicated to FC Studio users, available in both electronic and hard copy formats. This is a very handsome publication with excellent graphic layout and design and high quality printed images. But as any editor worth his salt will tell you, it's all about content and content is what MacVideo is about. There are contributions to MacVideo by a number of writers. Product comparisons and reviews, 'How-Tos', feature articles and other articles of interest. As soon as you start reading you quickly come to understand that these articles are not written by staff sitting in an office but rather by people who actually use this equipment in the real world, people who use this equipment to earn a living. The real world experiences of the writers rings true, and I can relate to their experiences. For me, this content is what gives MacVideo its exceptional value.