It was bound to happen, and we are all lucky it has. With the coming of Apple's new Motion program we are all anxiously awaiting the spate of books and discs which will help the Motion user to quickly grasp the ins and outs of its many parameters quickly, if not always easily. Motion, like Live Type is simple and intuitive on the outside, but for those who aspire to integrate all there is to know, a deeper delving into the program is mandatory. Fortunately, Digital-Tutors has developed a fine tutorial disc 'Exploring Apple Motion' which provides an in-depth look at this new and powerful graphic design and production software.

While the cover claims to provide the fundamentals of Apple Motion, this tutorial disc goes considerably further than that. The disc is comprised of three chapters. Each of those chapters has separate headings as they lead you down the path of understanding the many facets of Motion. 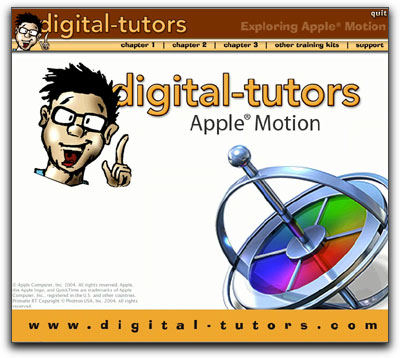 The first chapter does cover the fundamentals thoroughly discussing the basic interface, working with the canvas, layers and timelines, the use of the utility window, adding property behaviors and layers, as well as creating your own particles. The narrator spoke in an unhurried manner, in a clear and articulate tone. It was easy to switch back and forth between these sub headings by simply clicking on the chapter I was currently in. 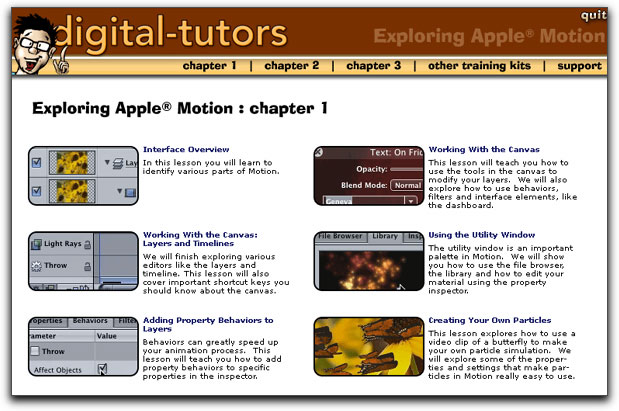 With Chapter Two, things got considerably more complicated and in depth but at no time did I find it difficult to follow. In this chapter, a project was started that utilized a great many of the features found in Motion thus enabling one to get comfortable with the program as well as producing a pretty cool project. At the end of this tutorial, I came to the realization that I really do need to upgrade my 9600 card and get a bit more than my 2 gigs of ram for my 2GHz G5. Never the less, it was easy to follow along. Could I do it myself without the guidance of the disc, probably not, but like anything, the more comfortable you are with using and manipulating the many factions and parameters the further your horizons will be on future projects. 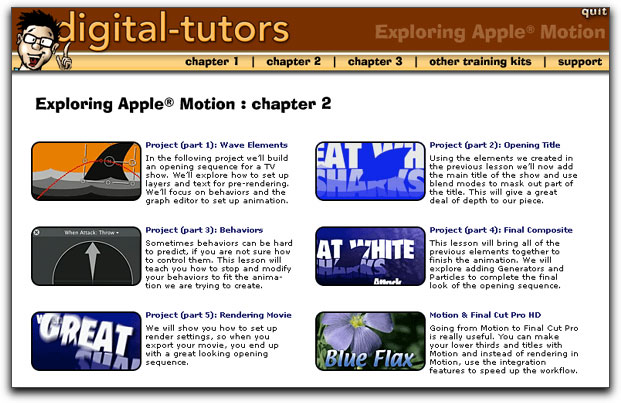 The third chapter branches out to a variety of Motion's various other uses from working with audio, creating displacements, using the many templates and how to modify them as well as working with numerous text options. Once again, all easy to follow and understand. 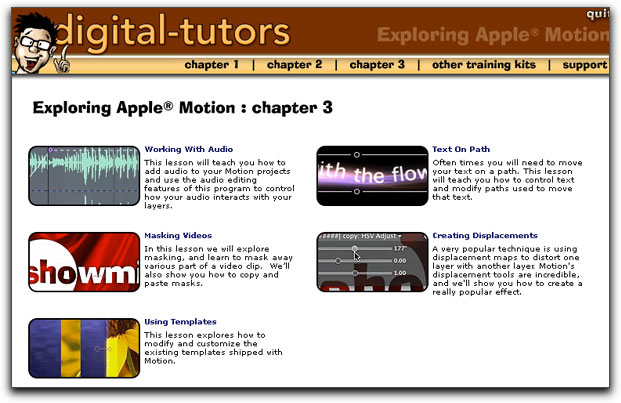 The disc opens up on the desktop in an 8x9 screen, which contains the start/stop arrow so that you can pause at any time, or drag where you want to be in order to compare to your own open Motion project. I was a bit bugged that the space bar would not serve the same purpose forcing me to go back to the mouse each time but that really is just nitpicking. Another small problem is that one cannot enlarge or make smaller the screen by dragging on the corners. It is what it is and that's all it is.

Digital Tutors has been in the business of making tutorial discs for some time. They produce an excellent disc covering Compositing in After Effects as well as for Photoshop CS and several others. Bottom line, Exploring Apple Motion is an excellent disc by which to learn the ropes of this great new application. For the person just starting out, Chap. 1 will explain away any confusion preparing them for the diverse activities to be found in the following chapters. By the time you have completed the 2 1/2 hours of information found here you will certainly feel more at home with Apple's Motion.

Steve Douglas has been an underwater videographer and contributor to numerous film festivals around the world. The winner of the 1999 Pacific Coast Underwater Film Competition and the 2003 IVIE competition, Steve has also worked on the feature film "The Deep Blue Sea", recently contributed footage to the Seaworld parks for their new Atlantis production, and is one of the principal organizers of the San Diego UnderSea Film Exhibition. Steve leads both African safari and underwater filming expeditions with upcoming filming excursions to Thailand, Costa Rica, Kenya and Bali. Feel free to contact him if you are interested in joining him on these trips.