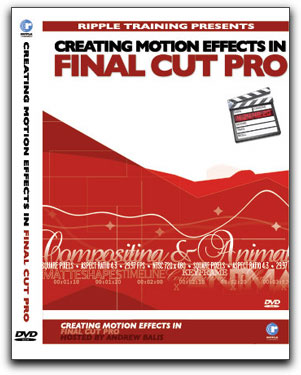 How well I remember the days when there were no books, no forums, no tutorial tapes or discs of any kind for the person just starting out with Apple's Final Cut Pro. We have come a long way since then, and there are now a plethora of media to educate the uninitiated, guide the user and remind the experienced Final Cut Pro editor of the many tools and techniques which lay abundantly at their disposal.

However, a new problem awaits us. How to separate the chaff from the wheat? While there may be something good in many of these offerings for all of us, we always want to get the most bang for our hard earned bucks and, in this new offering, Creating Motion Effects in Final Cut Pro from the Ripple Training group, we are successful. Like several of the Ripple Training products I have been fortunate enough to view, this DVD brings the user along at an easy pace with sequential activities and tasks. This disc is directed to any user of Final Cut Pro from the beginner to the advanced user simply because it is so full of useful tips and tricks, many of which I had forgotten about and some that I had no idea existed.

Andrew Balis, the voice behind the tutorial, exposes us to an in-depth look at a great many of the compositing and animation effects afforded us by FCP. This is achieved by dragging the 700 plus Mbs of project files and media from the DVD to your computer hard drive where you can then proceed with the over 80 separate skill facets in the five primary lessons. This covers just about everything you need to know from the basics of applying and using transitions and filters, to the various uses and functions involving opacity. Then, onto excellent tutorials relating to the offsetting and animation of the letterbox filter, key framing, and adjusting speed ramping. 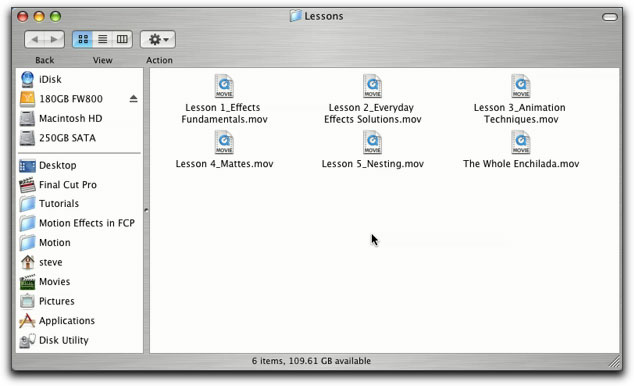 The 4th lesson on the use of Mattes and gradients beautifully covered the many uses and techniques of the garbage and travel mattes, mask shapes, and compositing modes. Of course, if you would rather just watch everything without a break Mr. Balis has included a separate movie humorously named "The Whole Enchilada" which allows you to see it all without having to launch each lesson separately. 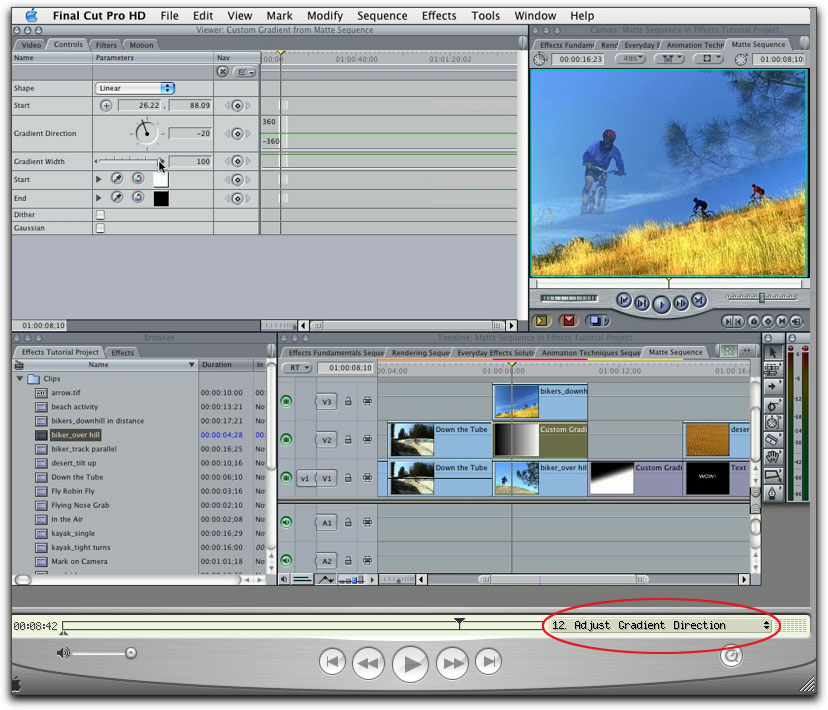 Tutorial interface, shown above, has a convenient Chapter drop down menu for easy navigation.

The folk at Ripple make use of outdoor footage shot of mountain bicyclists, snow boarders, skiers and whiter water kayakers in order to demonstrate their craft. These media files are also supplied in the project files should you want to work on your own individual FCP program as the Ripple tutorial provides you with its guides, tricks and tips.

Like all the Ripple series of tutorials I have viewed, Creating Motion Graphics in Final Cut Pro is presented in the QuickTime format so sizing the tutorial window to suit your tastes and screen size is a snap.

I love freebees, especially ones that I can use, and with the purchase of Creating Motion Effects in FCP comes three usefull plug ins from Eureka.... Film Grain, the old Cops effect-'Innocent Until Proven Guilty' and an easy to use plug in for the 'Pleasantville Effect' that achieves the effects seen in the movies Pleasantville and Schindlers List. As a special bonus, an extra lesson on how to apply and use these filters is also included. In addition, 9 texture files to be used in your Live type program are provided. A nice little bonus I'd say.

My word to the beginner, 'This is a great place to start your hands on training' and to the experienced user 'Bet you forgot about that one, didn't you?' Creating Motion Effects in Final Cut Pro by Andrew Balis and the creative staff at Ripple really do present The Whole Enchilada.

Steve Douglas is an underwater videographer and contributor to numerous film festivals around the world. A winner of the 1999 Pacific Coast Underwater Film Competition, 2003 IVIE competition, and the 2004 Los Angeles Underwater Photographic competition, Steve has also worked on the feature film "The Deep Blue Sea", recently contributed footage to the Seaworld parks for their new Atlantis production, and is one of the principal organizers of the San Diego UnderSea Film Exhibition. Steve leads both African safari and underwater filming expeditions with upcoming filming excursions to Costa Rica, Kenya and Bali. Feel free to contact him if you are interested in joining him on any of these trips. www.worldfilmsandtravel.com

You can purchase this tutorial from Ripple Training.com.