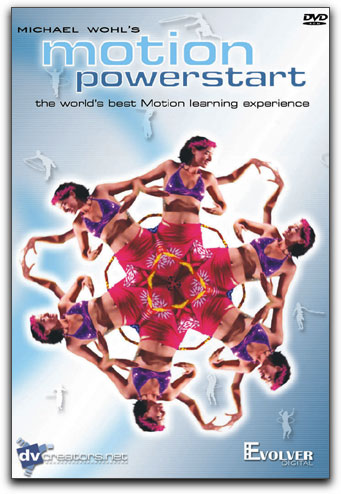 For those of us new to 'motion graphics', Apple's Motion application is extremely exciting. Easy to use and intuitive in nature, it seems, at first blush, to be a bit simplistic. Once you start to work with Motion you quickly discover that Motion is a bit like the 'rabbit hole' in 'Alice in Wonderland'. The abilities that lie just below the surface are powerful and multilayered. Looking down the rabbit hole, it is not easy to see all that is possible. Once inside the rabbit hole, it quickly become obvious that a guide is necessary. As Motion is such a new application, there is a dearth of tutorial material and up until now we have been on our own.

Four years ago, when I first started with Final Cut Pro, the first FCP tutorial on the market was the FCP Powerstart CD from DVCeators.net, it was beautifully done. The productions values were very high and the instruction was clear and friendly (read comfortable). Over the years DVcreators.net has produced a number of tutorials and each of these tutorials has maintained the high standards set four years ago.

Once again DVcreators.net is first to market with "Michael Wohl's Motion Powerstart" tutorial. Unlike FCP where there is a logical work flow from capture through to output, Motion has no such rigid workflow, yet there is a method to Motion's madness and Michael Wohl, who worked with the Motion development team, is our instructor and sorts all of this out for us by working through a complete project, layer by layer and effect by effect, teaching the tools and techniques to create some motion magic.

Michael starts us off with a thorough tour of the Motion interface by actually demonstrating all of the basic features that are at our disposal by utilizing the same media that we will use later on in the lessons. Instructions are then provided for navigating the tutorial and utilizing the supplied media that you will use as you follow along with the lessons and build your project.

Michael teaches us Motion by having us build a TV spot for a new, fictitious television show. Each lesson demonstrates and utilizes the many different tools and techniques required to build a Motion project. Each lesson builds on the previous lesson as the TV spot is brought to completion. Following along, step by step, first watching Michael then doing the steps yourself, is an excellent way to learn Motion. The TV spot is designed to touch on most of the many powerful features of Motion; Particles, Behaviors, Text formatting, Shapes, Masks, Trimming, Audio, Motion Paths and Keyframing. By the time that you have finished the TV spot you will be thoroughly acquainted with Motion. The tutorial finishes up with Motion integration with FCP and DVD Studio Pro. 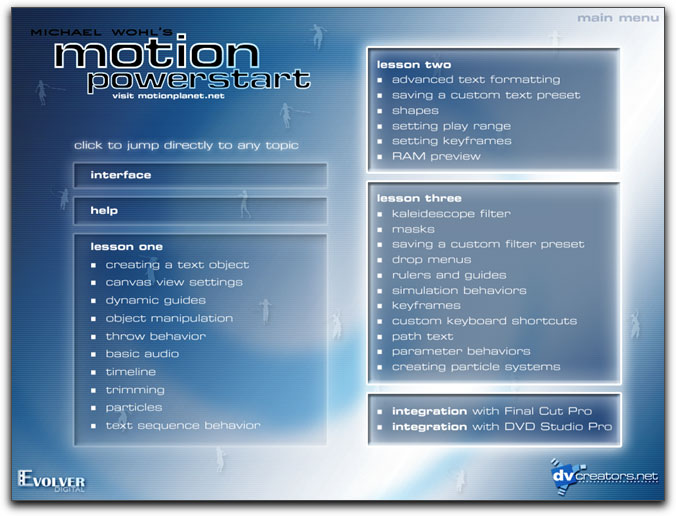 Motion is program with drag and drop abilities and an intuitive nature, so it is easy to get started and create some basic motion graphics. However, this application has many capabilities that you are not going to figure out on your own. If you are a 'motion graphics' expert, maybe having spent years using After Effects, you will be able to pick up much of Motion has to offer. For the rest of us, we are going to need help learning how to use Motion to its full abilities. The Motion Powerstart DVD tutorial does the job and does it very well indeed. Michael Wohl is an excellent instructor and there is great joy and humor throughout the tutorial which makes the learning process an exciting experience for the student. With a run time of almost two hours there is an enormous amount of information packed into this tutorial. You can view five different excerpts from the Motion Powerstart DVD tutorial to get a sense of how well this tutorial does its job. If you are looking to go down the 'rabbit hole', I can think of no better guide than Michael Wohl and DVcreators.net.