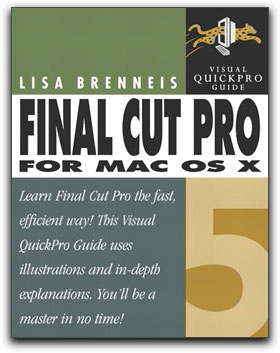 
Once we cut away from all the hyperbole surrounding the latest and greatest books regarding Final Cut Pro we are left standing before the altar of probably the very best Final Cut Pro reference book out there. From Lisa Brenneis' first edition of 'Final Cut Pro for Macintosh' to, this, the newest version for Final Cut Pro 5 for OS X, this series remains as the standard bearer for users from beginners to advanced.

To the uninitiated, this is not a FCP book on how to be creative with a load of tutorial projects to follow along with. This is a reference book that brings you up to date with all the workings of Final Cut Pro including, as one would expect, important references to the many new features found in version 5. These include using the RT Extreme with Dynamic RT, higher quality effects and a more intimate integration with Apple's other applications, DVD Studio Pro, Motion 2, Livetype and Soundtrack Pro.

New in Final Cut Pro 5 is the long sought after feature enabling multiclip editing. I have already viewed a few tutorials on this feature elsewhere, many of them excellently done. Never the less, Lisa Brenneis covers the topic superbly, bringing the user along sequentially in easy to use and understand steps.

Forgot how to accomplish something in FCP? This is the book to have by your side, go to the index, look it up and jump to that section where you will find clear and concise, step-by-step instructions as well as alternative methods. In fact, one of the books strongest features is its excellent indexing of all the applications Final Cut Pro has to offer.

For the intermediate and advanced user a page by page read through is unnecessary. You will jump from topic to topic as is needed. That is what a good reference book provides; easy to find information and references.

While the beginner might be overwhelmed by the depth and amount of information found in this book, she will, unquestionably, find that as she learns more about using FCP, more and more in this book will provide startling epiphanies. "I didn't know I could do that, cool" will be an often repeated phrase. I guarantee it!

And with that guarantee, I can't recommend this book enough. I've said it many times before to so many editors; this is the book I keep closest at hand to go to first when in need. You should too.