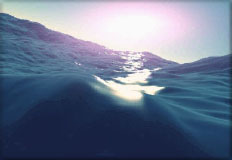 There I was, one of the organizers of the San Diego UnderSea Film Exhibition, previewing the films that would be shown later that night. One film stood out by videographer Ray Izumi. His opening was an overhead shot with the title rolling on the waves. The angle changed as the camera came closer to the water, then into it, then under with the titles reflecting both the change in angle and distance. As the camera sank beneath the waves the text, now overhead, was reversed but still rolling with each swell and wave. How did he manage this? Well, all was accomplished using a remarkable piece of software plug ins offered up by Digital Anarchy. I eagerly looked forward to acquiring their Psunami plug-ins myself hoping that the learning curve would not be too steep.

Psunami is primarily an Adobe After Effects plug-in whose focus is to create realistic, almost photographic quality, water and atmospheric scenes. They also have a Final Cut Pro version of Psunami which does have its' similarities as well as some significant differences. Both versions are OS-X compatible as is the rest of the Digital Anarchy line of software. Thankfully, Digital Anarchy also maintains an excellent site which offers real time clips to view what can be done using their software as well as some basic tutorials which I found fairly easy to follow, though easier in AE than in FCP, which I will explain later. It is my hope that they continue to build their tutorials so as to provide new users a real archive of possibilities from which to refer and explore.

Psunami works its magic by creating a true 3D environment within AE & FCP by using polygonal modeling, a 3D animatable camera and light sources, geometric displacement and texture mapping. Thus, you are able to create a 3 dimensional environment controlling the direction of various light sources whether they be the sun, moon, stars or even light rays beneath the water. You are also able to create just the right type of ocean conditions to fit your project by creating the size and movement direction of the waves and swells. The results are outstanding once you pick up on the unique properties of this program which allows you to create whatever environment your mind can imagine. Should you want to move from an Earth based ocean to one more akin to the planet Sharkron in the Epsilon cluster, Psunami is plenty capable of creating the 2 or more suns and atmospheric conditions that your Science Fiction masterpiece calls for.

There is an extensive number of controllable parameters which can be manipulated in a multitude of ways. The camera can be adjusted via its elevation, tilt, pan, and how much roll the camera should or shouldn't exhibit as it bobs about in the water. (Remember, you're on a boat now and if you get seasick, this is the plug-in which can allow you to revisit that wonderful feeling.) The waves or swell are also at your beck and call by providing you with a diversity of controls allowing you to set the wind speed, which determines the wave and swell size, the direction and knot speed as well as water color and light refraction controls. It takes some time getting used to the many choices one has using Psunami and this is where their designers really shine within the After Effects version. 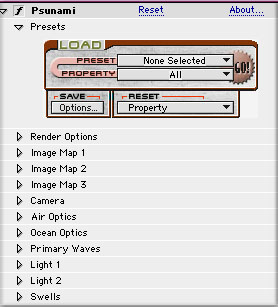 When one opens up Psunami in After Effects he/she is faced with a fine assortment of already saved preset conditions for creating a variety of environmental scenarios such as: Atmospherics, which has several subheadings like Aurora Borealis, Moon Smoke and Under the Rainbow. All in all there are about 16 presets each with its own assortment of sub presets. That is quite a package to work with and the presets certainly are helpful in getting to know just how much one can do with these plug ins. Once you have created and tweaked the setting you wanted for your project, you may save them in the PRESET MANAGER which allows you to store your final settings indefinitely . This is a great help for any future project where you want to recreate something you've used in past projects, but want to avoid having to start again from scratch. 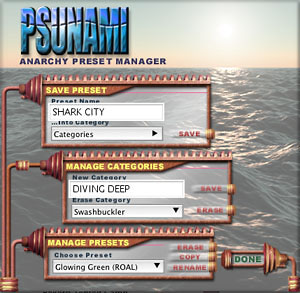 On the downside, the collapsible folders you see above do not exist in the Final Cut Pro version of Psunami. The user has the same exact parameter controls but without the folder or control headings. This makes getting to know where you are, and what each parameter affects in your project , a major and confusing chore. Hopefully, headings and folders will be present in future FCP versions. Without them you have one very, very long trip scrolling from the swell parameters back up to render options or in-between. Below is just the beginning of the FCP scroll. 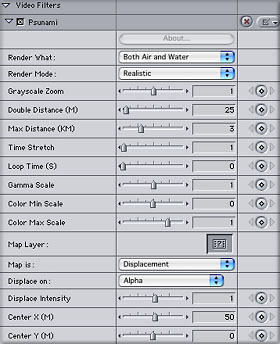 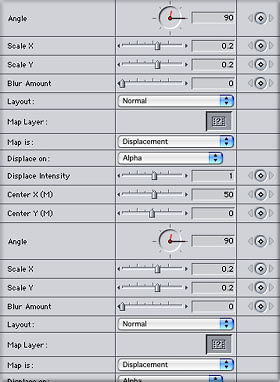 A most necessary requirement for working with Psunami is plenty of time and patience. Because Psunami uses Polygonal modeling to create their very realistic, real world images, rendering is an almost torturous pastime. Using Final Cut Pro on a Dual Processor 800, rendering a 13 second clip took about seven hours, not too bad if you are ready to hit the sack and let the computer do its thing while you snore away the night. However, if you need to have it right away, well, forget that. Every tweak you make will demand a re-render. The folks at Digital Anarchy help you out with this by providing several different render modes for you to work within while you are still in the creative process. This makes it quite a bit easier to set up your scene, render it quicker and prepare you for the next adjustment. Most of the tweaking can be done in their Texture Mode which renders itself fairly quickly, however, you will need to switch back to the Realistic Mode in order to really see how you've changed the appearance of your clip. Faster still is to set the render mode to Wireframe, which provides an almost instant picture of how the geometry of the clip has changed. In addition, Psunami provides a variety of grayscale depth maps and light tracking dots for other plug- ins such as Knolls Light Factory.

Once you have begun to master the workings of Psunami, the oceans, sky, sun, stars and rainbows are at your beck and call to create any water graphic vision you can imagine. 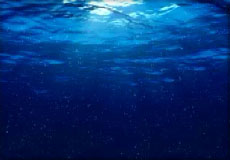 If you are as adverse to long PDF manuals as I am, Psunami's weighs in at 85 pages. Digital Anarchy offers an excellent two tape package of training tapes for only $79.00. These training tapes explore Psunami as demonstrated on the 4.1 version of After Effects and provides a more visual job of explaining and demonstrating the inner workings of a fairly complex plug -in. I strongly recommend the purchase of these tapes to cut that learning curve in half.

As previously stated, Psunami comes in both a FCP version for $129, and a combo FCP & After Effects version for $199. I can very highly recommend either version as being well worth the inexpensive price. I would definitely lean towards working with Psunami in After Effects as it was originally intended. The addition of the multiple presets, the Preset Manager and the collapsable folders provide a greater diversity of starting points, the ability to save settings from other projects and, certainly, greater organizational control. This is one set of plug-ins certainly worth getting excited about. Give yourself time to learn its many properties and have yourself a swimmingly good time.